Few words have the ability to quiet a room like sex.

In fact, during the nearly 13 years that my husband and I worked with teenagers, whenever a group would start getting rowdy and hard to control, I’d just yell “SEX!” at the top of my lungs, and everyone suddenly settled, wide-eyed and ready to listen.

During those years I had the privilege of giving many, many talks, “The Sex Talk”, discussing sex, self-care, boundaries, and more. While earning my counseling degree I even began researching the graduate school requirements to become a sex therapist. Basically I am the lady when it comes to sex education.

But it’s totally different when you’re talking to your kids about sex, right?

They put two and two together and the realization washes over their faces that you had sex in order for them to be there, or that someone did.

You have to discuss a future when your precious little child who used to watch the same episode of Little Einsteins on repeat will someday do that with someone else, that the body parts they’re used to being for one thing will someday be used for another.

It’s all so awkward, right? It’s weird? You worry that you’re telling them too soon, stealing their innocence, ruining something?

If you treat sex like a secret, it will feel this way. If you save sex for one conversation, for “The Talk”, then it’s like revealing the Santa secret, ripping away the curtain. Then it’s overwhelming. It’s a conversation you’re not used to having, so you’re both uncomfortable. Everything your child knew about their body is suddenly changed in the span of one little chat.

So what’s the secret to having “The Sex Talk” with your kids without it being awkward? Don’t have “The Talk” – have lots of them. 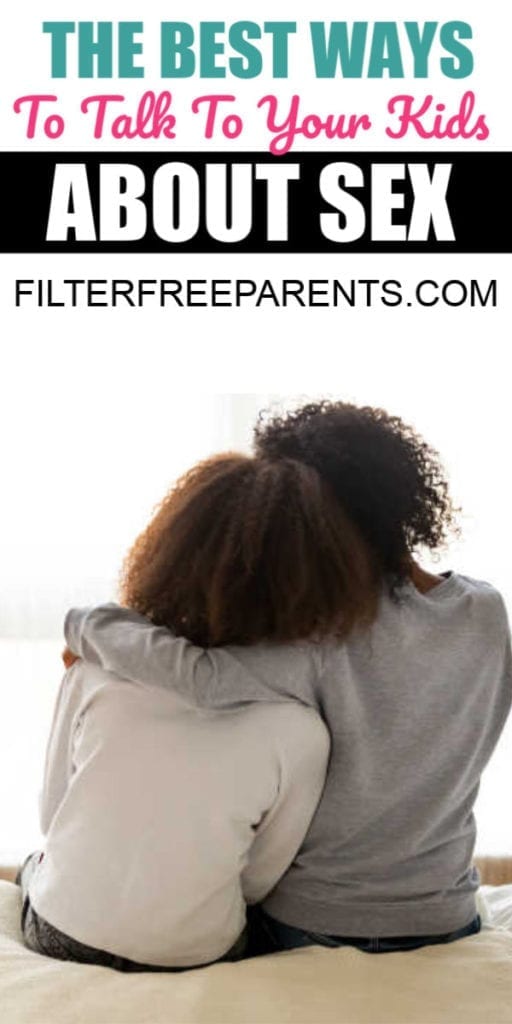 Start conversations young, and have them often.

You don’t have to explain intercourse to your toddler, but you can begin discussing body parts and their correct names. You can call it a pee-pee all day long if you want, but don’t make “penis” a bad word.

If a child asks a question, answer it honestly. If you give your child the truth every time, if you consistently discuss bodies in a factual way, then conversations about sex naturally present and progress.

“I’ll tell you when you’re older.” Why? What is the benefit of waiting? By hiding the truth of what sex is and what our body parts are used for, a sort of schism is created, a line that has to be crossed at some point that gives the impression that there is something shameful, secretive, and embarrassing about sex.

The jig is up. Everyone knows you did it.

There is no reason to be secretive about the fact that sex happens.

Your reaction to discussing sex will model for them how they should feel about it.

I won’t lie, I haven’t always been so carefree with the topic of copulation.

My mom didn’t have “The Sex Talk” with me, ever.

I learned about sex from movies, tv, magazines… all the sources you don’t want to introduce your children to such an important topic.

There was nothing matter-of-fact about my sexual education, nothing realistic, nothing educational. Instead I learned a lot of unhealthy and unrealistic ideals, standards, and expectations.

Mostly, though, I learned that this thing that was seemingly everywhere was something my mom was definitely not talking to me about, so it must be something to keep secret. And if it was supposed to be a secret, then when it came up it must be awkward. Have open, honest conversations. Lots of them.

Over the years, your honesty not only educates your kids, it draws them closer to you. It lets them know that you’re safe.

If they have a question, they know you’ll answer it. If they make a mistake, they won’t be too embarrassed to ask for your help.

Yes, I’ve frankly and honestly answered questions my kids have asked while internally blushing. But I got over the quiet cringes pretty quickly once I realized that my kids knew they could ask me such questions. Even if they’re a little embarrassed at first, their desire to know the answer and their trust in me to provide it was stronger.

This “method” of sex education was something I felt strongly about before I had kids.

I honestly didn’t know it would work so well until my oldest son came home from his first day of “Health Week” in 6th grade, also known as “The Week Where The Boys and Girls Are Separated to Discuss Their Changing Bodies”. In an attempt to keep an open dialog and not keep sex a secretive topic, I asked him how the class was.

“It was so boring. They gave us a packet to fill out this week, but you did such a good job that I was able to work ahead and finish it. I was the only one who knew ‘fallopian tubes’ for the crossword!”

So I had a giggle with him and a victory dance with myself.

Sex isn’t a secret. It’s not a scary, shameful topic to keep hidden until it’s time for “The Talk”. Sex is a really big deal, and because of that talking about it shouldn’t be.

People are Outraged that Resta…

Clare the Crypt-Keeper Crawley, a tragically single woman at 39, is the oldest Bachelorette in 16 seasons of this cringe-worthy … Read More

Ohio Mom Warns Others After Her Kid…