Doing ridiculous things while sleep deprived is essentially a rite of passage for parents. I could fill a book with all the embarrassing things I have done under the spell of exhaustion (“shampooing” with conditioner for an entire week, mistaking a nail polish jar for my 5-Hour Energy, etc.), but instead, I decided to ask other parents: What is something stupid you’ve done while suffering from parental exhaustion?

Ladies and gentlemen, the responses did not disappoint! I nearly peed my pants reading some of their answers. (This is actually not that surprising. I’ve birthed three large babies, so…).

Here are some lessons we can all learn from the suffering of our fellow parents and their rather exceptional achievements in the Exhausted Parents Hall of Fame. 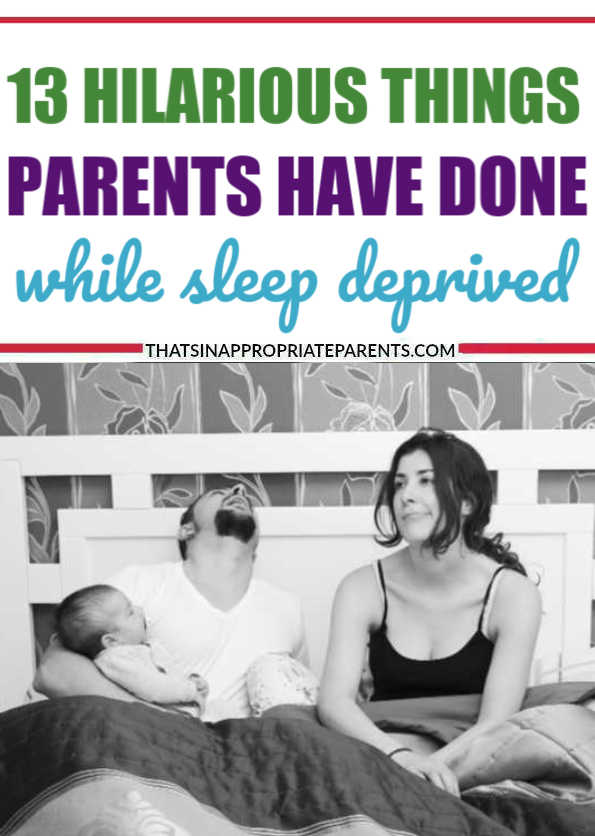 Making dinner every day stinks, but exhaustion makes it much worse.

Katie, a mom of four says,

Katie actually did a little better than poor Niki, a mom of three. At least Katie got the raw food into the crockpot. Niki recollects,

“I left raw chicken breasts on top of the fridge for GOD KNOWS HOW LONG. We started to notice a strange smell and about 5 days later, we found the package on the fridge.”

Unfortunately, breakfast can be just as bad as dinner. Brian, a 39 year-old father of one, reminisces,

“I went to put cinnamon on my oatmeal but accidentally used crushed red pepper instead. Didn’t realize it until I took a spoonful.”

Yikes—that is quite a wake-up call!

There will be physical suffering

Anyone who’s witnessed (much less experienced) giving birth can tell you there’s a great deal of physical pain involved, but the pain doesn’t end there…

Heather, a mom of two, explains,

“I was nursing my daughter in the middle of the night. Dozing off, my head fell back and schwacked the headboard! It was so loud my [Air Force] husband woke up. He thought someone got shot. I had a huge headache for days and decided to see the doctor. You can imagine his look when I explained what happened.”

(Heather is fine now. Thanks for asking.)

Laura a mom to three, admits,

“I put ear drops in my eye this morning. It burned really badly. It wasn’t until I put my glasses on that I realized I grabbed the Otic drops not the Optic drops.”

Personally, I think the blame belongs with the manufacturers. What sleep-deprived parent is supposed to discern the difference between the words “Otic” and “Optic”?!

Of course, some of this suffering may belong to the baby–this sleep-deprivation is a hell of baby’s own making, after all. A different Laura, also a mom of three, confesses,

“I fed my youngest (only a few weeks old) a bottle in the middle of the night and totally forgot to put the lid with the nipple on. I poured two ounces of warm formula all over his face and myself.”

You will misplace everything… possibly even your baby!

Lindsay, a mom of two, remembers,

“When my son was about three weeks old, I had to run to the grocery store at night. I was so exhausted, that I lost my house and car keys. My husband had to get the baby into the car (at bedtime), and come to get me. Oh, and we had to replace the fob key for our Jeep that I lost, to the tune of $300.”

Suzy, in a sleepless fog, attempted to dress her five children for school, but misplaced her preschooler’s underwear. She says, “I ultimately had to get another pair. I found them later. In the refrigerator.”

Of course, it’d probably be better to make Suzy’s mistake than Erin’s. Erin, a mom of two, says,

“I was changing one of the boys in the middle of the night. Zipped up PJs, reswaddled, the whole thing. Next time he got up and I changed him, I noticed I left the original dirty diaper rolled up behind him in his PJs.”

But Mike wins the first-place trophy in this category.  His wife shares this story, from the week they brought home their third child,

“The baby had been up for hours and I woke my husband up to tell him that I needed a little sleep, so he needed to take her. He got up, put on a hoodie and left the room. I waited a few minutes but he didn’t come back so I took the baby and went to see where he went. I found him in her room, sitting in the rocker, rocking by himself. I asked him if he forgot something and he said ‘No.’ I then asked him where the baby was and he snapped out of it and realized he had forgotten her!” 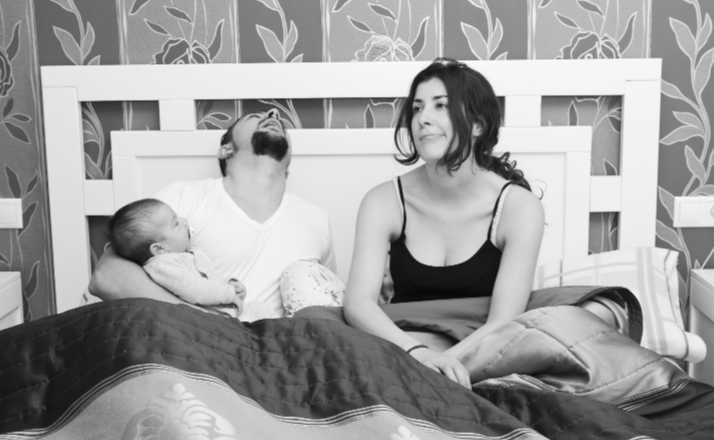 Anything you say should not be used against you

There are plenty of times for important conversations with your partner, but deep in the throes of sleepless weeks or months is not one of them. Exhausted parents should get a free-pass for any absurdities their lips may utter.

Cassie, a mom of two, says,

“I recall a 3am breastfeeding session where my husband had brought the baby into our room to nurse (while I was still asleep) and I woke up saying, ‘Aww, how old is she? What’s her name?’ I really do not miss those days of extreme sleep deprivation.”

It’s unclear whether this is better or worse than Mary Frances’ story.  Mary Frances explains, “When my youngest was about six weeks old, I was having a dream that I had twins. While still asleep, I picked the baby up from the bassinet, thinking she was the other twin, walked down to the kitchen, and asked my husband, ‘Where’s the [other] baby?’ He was all, ‘Um, you’re holding her…?’ That was a low point.”

Danielle, a mom of actual twins, was changing a late-night blowout with poop allllllll over her baby boy’s front. This prompted a serious birds-and-bees inquiry to her husband:

Danielle: “Does this ever happen to you?”

Danielle: “Do you ever get poop all over your penis?”

Hubby, still confused: “Well, Danielle, I don’t typically poop in my pants, so…….”

If you’re a new parent, the good news is that the sleep deprivation of the early years is temporary. It feels like it will last forever, but it doesn’t.

The bad news, I’m told, is that when your kids hit the teen years, you can look forward to the sleepless nights starting all over again, albeit for different reasons. You may want to begin stockpiling (even more) coffee now.

What’s something ridiculous you have done while sleep-deprived? Drop your “favorite” memory in the comments!