I’m convinced there’s a reason why 30 or 40 years ago, babies and toddlers were placed in hard, wooden highchairs with stiff, rigid backs. There were no fluffy, padded inserts like those found in today’s seats. Back then they were smart and had it figured out.

They were not about to waste their time washing down seat padding and trying to scoop gunk from all the little cracks and crevices found in modern highchairs. 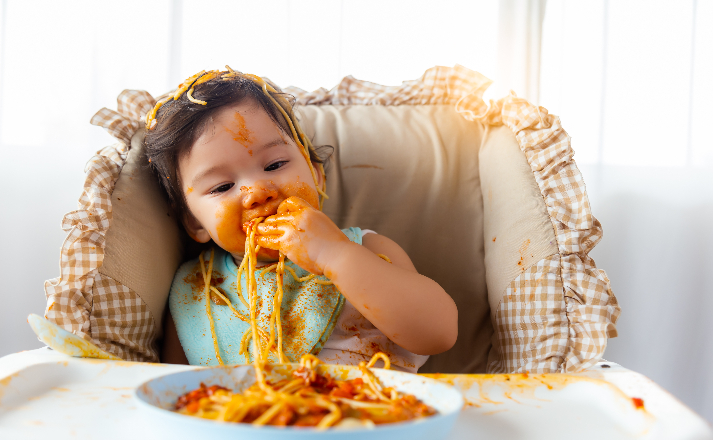 Take it from me. I have a toddler running around my house. She’s at the age when she is constantly exploring her food.

By exploring, I mean diving into it headfirst with both hands and feet. I even posted a video a few weeks ago of her taking a bath in soup. It was everywhere!

Besides soup, there are some other foods that should just be completely banned from highchairs.

Pastina — Literally meaning “little pasta,” pastina is every parent’s worst nightmare. It’s the smallest and STICKIEST pasta you can buy. And I’m not sure why I keep doing just that.

I buy it. I cook it. She turns the house into a pasta-peppered mess.

The worst part? You can’t sweep this s**t up. It’s too sticky! Once it lands, that’s it. You’re forced to wipe down every surface within 10 feet or do the two-finger pick-up — piece by awful piece.

Ice Cream — Sure, we all scream for ice cream. I also happen to scream (in the other room) about ice cream. Ugh. This is one of those treats best served on a front porch or while sitting outside the ice cream parlor, not in highchairs.

So, if you happen to miss a puddle or don’t immediately wash the padded seat insert in those plush, wonderful highchairs, be prepared to cry (and gag) over spilled milk.

Mashed Potatoes — If you’re going to give these to your baby or toddler, make sure to put your little one in a hazmat suit first. This stuff fights back! And it will attack you, too; especially if you’re wearing a nice pair of black pants.

Peas — Green mush. It’s like someone forgot to shut off the valve on a nuclear waste pipe. Once it finds the hair, there’s no stopping it. Your child will turn into the Jolly Green Pipsqueak right before your very eyes!

Anything Red — Like a bull, red attracts a baby to no end. That’s why they love red foods. Tomato sauce, tomatoes, SpaghettiO’s, strawberries — damn all of you!

Rule of thumb: if it’s red, they’re going to have a field day and it’s going to stain even the toughest of plastics, the cleanest of fabrics, and the most kissable of cheeks.

I know I’m missing a bunch of foods that make mealtime a one-person food fight. Which ones would you add to this list?

As anyone who has breastfed their baby (or attempted to) knows, breastfeeding isn’t always smooth sailing. It can be fraught … Read More