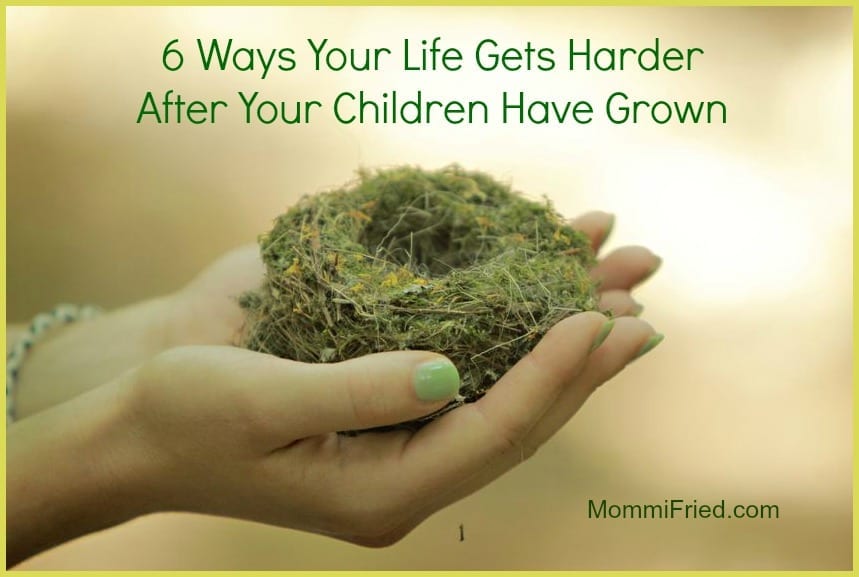 If you’re one of the millions of people who believe that life gets easier after your children have grown, please form a single line so I can forehead thump the first person and watch the rest of you fall like dominoes. Life does not get easier when the birds have flown the coop!

Here are 6 ways life gets harder after your children have grown:

Stalking By Parent Comes to an Abrupt End

It doesn’t matter if they’re two years old or twenty-two years old, you always worry about them.  When they’re grown and flown, you worry even more. You can’t see them, call out to them from the next room, or just walk up and give them a big hug—any old time. You’re now at the mercy of their cell phone and occasional visit. If you’ve ever tried to decipher a text from an irrational, yet now independent, 20-year-old, this one will resonate.

All hands on deck when there’s a household to run! Unfortunately, when the kids are gone, there’s no one left to pawn the poopy stuff onto. You’re stuck doing it all! Throwing the laundry from the washer to the dryer. Sweeping off the deck. Cleaning out the car. Mowing the yard. Carrying in the groceries! Think you were busy when you had a full house? Think again!

No More “Because I Said So”

Once they’re adults and moved out of the house, they’re officially on their own. You can assist them when they need it. Offer suggestions. But you can no longer stick your nose in their patooeys and blurt out unsolicited advice. They have to learn to make sound decisions and how to get up when they fall or fail, which they will—over and over again.

You’re Now the One Declaring, “I’m so Bored!”

Remember how many times Billy whined, “I’m so bored.” Or Sally moaned, “There’s nothing to do.” Guess what? The tables have turned. Without kids, you might find yourself short on things to do. On one hand, that’s awesome! Time to tackle all of those projects you’ve had on the backburner for years. Or sleep! On the other hand, at the end of the day, when you’re tired or in need of conversation, who will be there to listen? It can get very lonely AND boring without the kids around.

If your marriage has been less than rosy, issues tend to surface when the nest is empty. Don’t keep brushing these issues under a rug. Address marital woes sooner rather than later, before they manifest into something greater—something irreconcilable. Judge Toller really doesn’t want to see you in Divorce Court. And neither do the kids!

When there are no more children left to parent every single moment of every damn day, you’ll wonder who you are. You’ve become so accustomed to being a mom (or a dad) there will be a sudden loss of identity–like Super Mom with amnesia. Don’t worry. Even if you can’t see them, they’ll always need you. You will always be their mom. And the greatest super hero ever!


19 Funny Tweets About The Swampy Su…

So… 2020, am I right? What a year. What a crazy, broken, dysfunctional, dirty, flaming dumpster-fire of a year. So … Read More

Most Christmas songs come with some sort of message. Some beg us to be moral for the sake of morality … Read More