Filter Free Parents
Home Mom Life Encouragement 7 Truths About Life With A Tween That I Was Not Prepared...
Since becoming a parent I have learned some new terms for various stages of childhood. The terrible twos, threenagers, fournados. I have survived them all. I assumed I was home free until the teenager stage.

I know. Some of you are laughing, because you know the truth. Apparently I was wrong.
According to the Cambridge Dictionary a tweenager is a “Young person between the ages of approximately eight and twelve.”
This differs slightly from the Oxford Dictionary, which defines a tweenager as “A child between the ages of about 10 and 14.”
Since my daughter is 9 and in the throes of tween-dom, I am going to go with the Cambridge definition and hope that this stage is done by 12. Maybe then I will have a reprieve until the official teenage years begin at 13.
(You can stop laughing now.)

Here are 7 Truths about life with a tween that I was not prepared for. 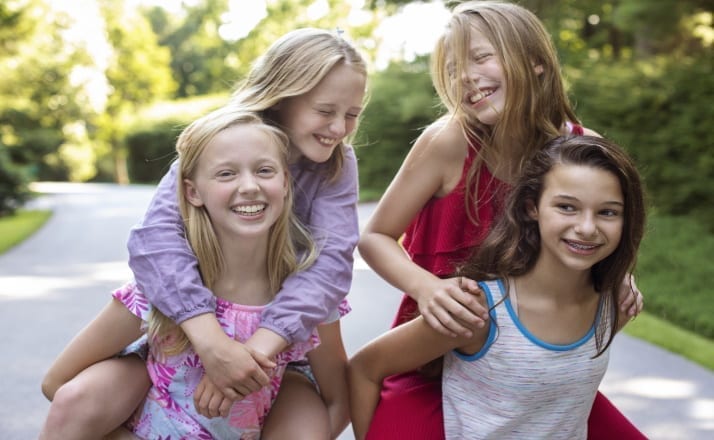 They say really funny things and make you laugh. A lot. They are also sweet and smart and still love you so so so much, at least according to the notes they write you.
They talk. A lot. Which is awesome, because someday soon? They may not want to talk to you at all.
They are huge hugs and silly giggles. They are big smiles and hands to hold.

2. Tweens remind you that you know nothing.

However, I also think that the dictionary definitions have done us somewhat of a disservice. It would seem that there is a piece missing… a warning, if you will.
You know, like, “Warning, danger ahead.” Or “Caution, contents may be hot.” Or, “Warning, do not poke the bear.” Or, “Caution, may contain nuts,” or more accurately, may BE nuts.

This business of growing up? It’s confusing. For everybody.

I thought I had this parenting gig figured out. I thought I knew things. Not everything, obviously, but enough that my confidence had at least risen from complete ignorance to the level of competent.
Now? I’ve discovered I know nothing. It’s a fact that my tweenager likes to remind me of on occasion. Not outright. Just subtle reminders. You know, like by rolling her eyes.
For example, getting dressed. It’s something we all do. Some of us take a lot more time than others. This morning when my tween finally emerged from her room after a lot of banging and heavy sighing, I told her,
“I love your outfit!”
She looked at me sideways. Was that an eye roll? My mind was scrambling. Wait, do I love your outfit? Do you love your outfit? Are we loving this outfit? I don’t know. It was exhausting.
Sometimes I think it’s best not to say anything. Be warned, this tactic also comes with its fair share of risk.
“You hate this outfit, don’t you?”, she’ll yell. “It looks so stupid! I have nothing to wear. Nothing I own matches. Nothing!”

In turn, you will start to question everything too. Every decision you make, every command you give, every act you commit. It is all suddenly up for debate.
Tweens’ negotiating tactics are surprisingly advanced- mostly because they have way more stamina than you do. If negotiating doesn’t work? They have no shame in resorting to a DEFCON 1 nuclear meltdown.
In these moments you may experience post traumatic flashbacks to the mostly suppressed Fournado phase.
When these meltdowns occur, I try to remind myself that this is all just a part of growing up. The testing of boundaries and limitations is normal.
Desperately biting your tongue to prevent you from screaming back out of pure frustration with your tweenie? Also normal.

Tweens are able to wreak havoc in a matter of seconds, annihilating everything in their wake: their closets, their siblings feelings, your sanity. You will do everything in your power to keep it together.

After all, your tweenager is still a child. It is your job as a parent to model rational behaviour.

Always be on your guard. Always. You may go days with things being “normal.” You will start to think, “Yes! This phase has passed!”
Don’t be fooled. It hasn’t.
It’s just been lying in wait, a tiger preparing to strike its prey, without warning and often, without provocation. One minute they love you. The next minute they don’t. Want to have your ego stroked and then ripped apart over and over and over again? Have a tweenager.

6. Tween-dom is a minefield of emotions, interspersed with valleys of contradiction.

There is eye rolling, door slamming, pouty lips and foot stomping. But there are also kisses, bedtime cuddles, and exclamations of “You’re the best mommy ever!”. They still want to play with stuffies & dinosaurs but two minutes later? They’re too cool for stuffies & dinosaurs.

7. Most of the time tweens just want to be seen and heard.

…which is why they’re so LOUD.

Tweens are trying to figure out who they are, separate from you, their parents, while still wanting to hold your hand.

They are amazing human beings, equal parts salty and sweet. They are standing on the precipice of adolescence, staring down into the dark unknown of how the world works and where they fit in it.
It is a tough, confusing place to be. It’s also a beautiful and exciting place to be.
Right now, for my tween and I? There’s nowhere else we’d rather be.