I’ve learned a lot from my mother-in-law. When it comes to mother-in-law and daughter-in-law relationships, I guess you could say mine wrote the book…

*Ahem* …IF  that book were a how-to manual straight from Satan himself.

So if any women out there would like to take a few lessons, here’s a CliffsNotes version of my MIL’s handy-dandy guide.

Note: My MIL has only sons, so this advice is tailor-made for the suffering of daughters-in-law. If you have daughters, fear not. With a little tweaking and creativity, I’ve no doubt you can put this guide to good use torturing the joy out of your sons-in-law as well.

Make everything a competition

Normal people understand that having several circles of friends and family is healthy. Regardless of the number of relationships, there is more than enough love to go around.

But if you want to win the trophy for Worst Mother-in-Law, you need to scratch that thinking. In fact, ditch all common sense and reason — those have no place here. Channel your competitive diva and get ready to rumble!

Why have healthy relationships when you can turn everything into a twisted competition for love?!

If your son doesn’t return your call, it’s because your daughter-in-law has poisoned him against you and he loves her now– not you.

If your daughter-in-law can’t make it to an event of yours because of a prior commitment? It’s definitely because she hates you and prioritizes you last.

If they’re spending some time with your daughter-in-law’s family, it’s because they love them more. WAY more.

Fill every holiday with drama and angst.

Christmas carols are fun, presents are great, family traditions can be a delight… but you know what really brings magic to the holiday season?

DRAMA! –And as the Mother-In-Law From Hell, it’s your job to provide it!

Holidays are so much better when your kids have no idea what to expect! When you arrive at your son’s place for Christmas Dinner, will you play the role of Mother Theresa or Wicked Witch of the West?

The mystery is what makes it fun!

Will you happily partake in the family traditions your adult child has created for their own children? Or will you stand there with a sour puss and passive-agressive sighs? Only time will tell! 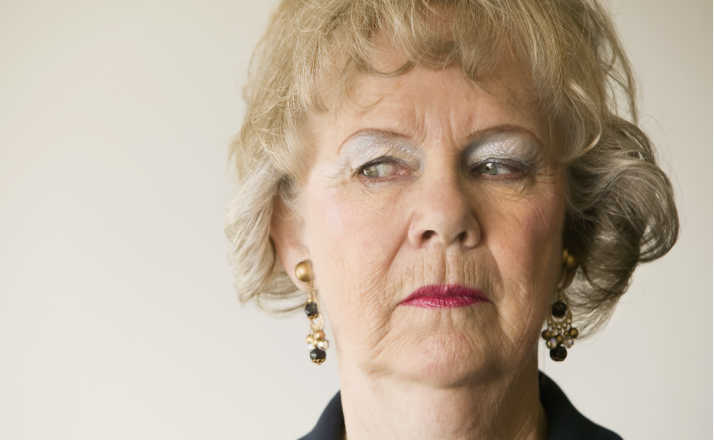 Another fun thing to do where holidays are concerned is to act all easy-breezy (“I’m good with that. Don’t change your plans on my account, etc.). Then, when the actual holiday arrives, be anything but good with that.

This adds an aura of unpredictability and misery that really just brings the whole masterpiece together.

If you do your job right, you can turn your family’s once-favorite holidays into some of the most dreaded days of the year. NAILED IT!

Make it clear your daughter-in-law is responsible for everything and nothing.

If your grandkids are well-behaved and well-educated? It’s because your son “helps” so much.

If they’re hellspawn demon children? It’s because your daughter-in-law is a bad mom.

If their house is nice and well-kept? It’s because your son works so hard.

If their house is a mess? It’s because she is lazy.

If your son calls or sends a nice gift for your birthday? It’s because he is so thoughtful.

If he doesn’t? It’s because she didn’t bother.

You get the idea! Some of these are just so easy — after all, this is just the starter guide. Bonus points for finding more of these scenarios and taking them to the extremes!

If you can drive your daughter-in-law to a nervous breakdown or the brink of divorce, you’ll be firmly in the running for In-Law Enemy No. 1.

Take everything as a personal affront

Your grandchild caught the flu before your visit because he doesn’t like you as much as he likes his other grandmother.

Your daughter-in-law deliberately got pregnant so she’d be unable to travel to your 63rd birthday party. (Everyone knows 63 is a crucial milestone birthday!)

Your son took that huge promotion and pay raise solely because it would move him two hours further away from you. (It was probably all your daughter-in-law’s idea anyway).

The most critical piece of this playbook is that you can never, EVER acknowledge your role in the discord.

These sneaky, deliberate, underhanded things you’re doing? You must play dumb at all times. This might be difficult at first, but you’ll get used to it.

Rather than having to think about ways to cause drama and discord, it will come to you as naturally as breathing in and out.

With enough practice, even your face will learn to play along. Over time, it will become etched in a permanent expression of irritation and disdain. (But don’t worry: should you ever decide to behave like a decent human being again–however unlikely– it’s probably nothing a little Botox can’t fix.)

If you want to be the actual worst, you need to continually up your game.

Now, my dear apprentice, I can’t stress this enough: these tips are just to get you started. The possibilities are truly endless! (I know this for a fact, because just when I think my mother-in-law can’t stoop any lower, she always manages to surprise me!)

If you demonstrate tenacity and commitment, I know that you, too, can achieve Monster-in-Law status.

Editor’s note: The writer of this piece has chosen to remain anonymous.

When our kids are little, we sometimes look forward to a time when they will be a bit more independent … Read More