I never assumed I’d be one of these superbly organised mums. But I thought I could at least make some plans on how to deal with my baby and stick to them. I had plenty of good intentions.

Having set ideas about pacifier use (never), swearing in front of baby (never) and exercising again (as soon as baby was six weeks old), I assumed I was prepared and everything would go according to plan.

Oh man, I was so wrong. It all turned to sh*t in less than a month.

Following the list of rules you set pre-baby isn’t going to happen. Make perfect plans all you want, but trust me, they won’t last.

Just like you solemnly swear that you will ‘Never ever going to drink again. No seriously, never! Or at least not this entire year!’ when waking up with a massive hangover after a Silvester party that got a bit out of hand. Guess when you open the first bottle of wine? Indeed, on the second day of January.

Seeing as my New Year’s resolutions usually all fail before February, I probably shouldn’t have been surprised that soon after giving birth, all my good intentions went out of the window.

There was the small stuff. Like the fact I planned to never scream or swear around my baby. Screaming in front of your child is just a bit of a no go.

Also, swearing when the little one is in the room will probably lead to a toddler who says ‘f*ck’ when she falls down, instead of ‘oops’. Not very charming.

That’s why I decided to be utterly zen around my daughter, never ever raising my voice in anger. This aspiration didn’t even last a single day.

Seriously, what was I thinking?! Show me one mother who says she’s managed to not scream or swear in the first week after giving birth, whether it was because of her painful stitches, to curse her sleeping husband, to cry because her nipples hurt like hell after an hour of non-stop nursing, or just to scream at the whole damn world.

That woman is either a saint or a liar.

Apart from never swearing, I’d also never talk to my baby like an idiot.

Baby talk, like ‘Goo goo ga ga? Does little tiny lovva bobba baby bear wants a bit more yummyyummy boobymilk?’, makes me want to puke. No f*cking way I’d ever talk like that. What’s wrong with setting a good example and teaching your child to talk like a normal person instead of a deranged Teletubbie?

Well, just guess which tiny lovva bobba baby bear is now asked every evening if she wants a bit more yummyyummy boobymilk or prefers to go nightynightysleepysleep in her cuddlybuddly ootsietootsiebeddiebed?

Yup, you probably guessed that one right: mine.

My baby, who has a pacifier. 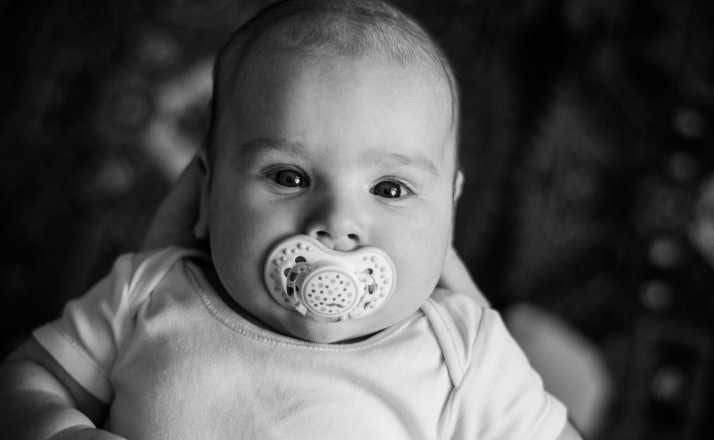 Given by her mother, who at 8 months pregant declared she’d never ever put a piece of plastic in her baby’s mouth as it ‘just looks wrong’ and ‘was a symbol of lazy parenting used by parents who couldn’t be bothered to figure out why their poor child was crying and would simply insert a pacifier to stop the sound’ (Yup, I was a judgemental bitch).

It took about two weeks before my vision turned 180°.

Keeping your baby with huge sucking drive happy and your nipples intact without using a pacifier? Impossible.

There was the bigger stuff, too.

I planned to be a good mum and never ever let my baby sleep in the car seat.

I’d read all the horror stories of everything that could possibly go dramatically wrong when letting a baby sleep in a car seat after having arrived at your destination.

Hence why our car seat would only be used in the car.

Too bad baby wakes up crying the moment you start undoing those buckles, but I’d never ever leave my daughter in that thing for one minute longer than neccesary.

Until she got colic, which meant I had to choose between a baby who was screaming with pain and a baby who was dozing peacefully in her car seat. (Yup, I choose the latter).

Another bad mum moment was when I left my baby alone on the changing pad. Something I always said I’d never do. Not even for a second.

What if she manages to roll over and falls off? Indeed, the first few days I dutifully changed all diapers with one hand permanently stuck to my baby.

After a week I realised she couldn’t possibly roll over by herself yet.

So what do you do when you’ve just taken off the diaper and your two-week-old baby pees all over the clean clothes? You leave her alone on the changing pad for ten seconds to get new ones, praying she won’t reach the ‘being able to flip themselves over’-milestone just yet.

Pre-baby I vowed I wouldn’t become one of these whining mums who are always tired.

‘Oh, this is soooo hard. I am sooooo tired. It’s already 4pm and I’m still wearing my pyjamas that are covered in baby vomit, my coffee has gone cold and I haven’t even had time to shower yet.’ Whine, whine, whine. Why are new mums such crybabies?

That would so not be me.

Uh… Apart from the fact that I’m still in my baby vomit covered pyjamas and still haven’t showered at 9pm, that turned out to be exactly me. Knackered, complaining and nearly hysterical. Every. Single. Day.

Because, let’s face it: it can be pretty damn hard.

Calling myself a feminist, before giving birth I loudly declared that my partner and I would divide all the baby-related work equally. ‘We’re both parents, so why should I do the majority of the work?’ I thought. Muhahahaha. Since daddy doesn’t have milk-delivering boobs, can’t seem to rock our baby to sleep and conviently always needs the loo himself when his daughter has a poo-explosion, this mommy is screwed.

Oh well, what’s the saying? Life is what happens to you when you’re busy making other plans? Well, same goes for parenting.

At least you learn from your mistakes.

Or not. Because I’ve already made of lots of perfect plans about how to raise my toddler in the next few years: no bribing her with sweets, never giving into her tantrums when she’s screaming in the supermarket aisle, and of course I’d never ever put her in front of the TV just so I can drink wine in peace.

Somehow, though, I fear all these new good intentions will go the same way as the ones above: straight into the trash.

It’s that glorious time of year- the leaves are changing colors, the air is crisp and cool, and pumpkin spice … Read More