A little over 2 weeks ago, I signed the Do Not Resuscitate papers for my mom. I bawled as I did it. I was giving permission for the hospital to let her die. Letting go doesn’t get anymore official than that.

That wasn’t the only difficult part of my mom dying, either. Once she was moved to hospice care, I had to make the decision to not place a feeding tube. She hadn’t eaten in two days and I had the choice to place a tube or let death run its course. 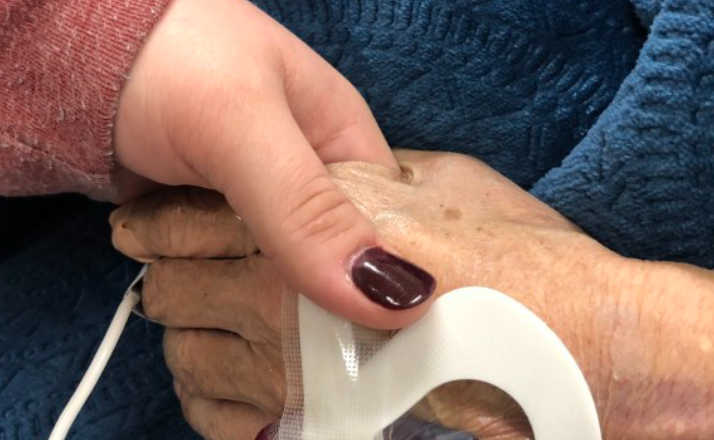 The only potential silver lining in my Mom’s last day is that we had this difficult discussion just a few months prior.

After leaving her first oncology appointment where she was diagnosed with stage 4 metastatic colon cancer, we sat down at O’Charleys and proceeded with the tear-filled conversation that her doctor instructed us to have.

“You need to go ahead and talk about your end of life wishes now, so that she doesn’t have the burden of wondering what you want in an already difficult time.”

End of life wishes. That was an eloquent way to say, how do you want to die?

At the point that I signed the paper, my mom was mostly delirious. She was hallucinating and not making any sense when she talked. She was no longer capable of communicating that she was in pain. Her liver was shutting down. She wasn’t eating. She was dying. And I had the option to prolong her dying process or let it happen naturally.

For me, it was an obvious decision to make. It was still hard, but I never had a doubt in my mind about signing that DNR.

I prayed for a miracle but I also knew that God’s definition of a miracle and mine were not currently aligned. My mom was dying and whether I allowed them to place a feeding tube or resuscitate her, she was still going to die. In my heart, I knew that.

Even though my mom and I had what we thought was a thorough conversation about it, there were a lot of things that we didn’t talk about, simply because we didn’t know.

So, I want to encourage you to have the conversation now.

Talk to your parents, siblings, etc. now. I don’t care if they’re only 50 years old and in perfect health- so was my mom.

And it’s not just for your parents and loved ones, but for you. What do you want? Do your family members know?

Give them the blessing of knowing your wishes so that they have one less burden to carry while they’re grieving.

Call up your parents and say, hey, I just read an article on Facebook and want to ask you a few questions. And just get it over with.

Do it now so that when you’re already completely broken and overwhelmed, you don’t have to think or worry simultaneously. You’ll know what they want. You’ll have peace with your decisions and you can move on quickly from that aspect of their death.

A simple search of Advance Health Care Directives will give you an idea of what you need to ask/tell/think about. A great list is here on the Everplans website.

Death is inevitable. And it will be devastating regardless.

But because I knew my mom’s wishes, I’m simply grieving her death. I’m not in anguish over any medical decisions that I made, because they weren’t mine to make. I knew what she wanted and while the cancer took her away before she was ready, I was able to give her the gift of, at least, controlling what those last days looked like.

When it comes to optimal health, there are all sorts of immune-boosting supplements on the market these days. Social media … Read More