I was never concerned with the gender of any of my babies, except while pregnant for a second time.

We already had one beautiful girl so naturally everyone assumed we wanted a son. Seriously, every single person we encountered said, “I bet you are hoping for a boy!”.  (My husband might have answered with an enthusiastic, “Yes!”)

I always nonchalantly said we would take either, but secretly I was hoping for a girl. I was worried if I said it out loud I would jinx it because I clearly can control the universe in this manner.

And I still can’t.

My sisters shaped pretty much everything about who I am today. It was no surprise to me when scientific evidence started being shared around the interwebs stating what, to me, is completely obvious – people with sisters are happier. Apparently they are also kinder and more empathetic which makes me want to hug my sisters even more because if I am kinder it is because they have rubbed off on me. I was the oldest you see and MIGHT have been a little bossy.

I’m sure there are many times my parents didn’t see this kindness and empathy while we were growing up. I’m sure they wanted to strangle us during the inevitable sister wars over stealing each other’s hairspray and clothes. And over who messed up which part of our bedroom. And over whose turn it was to sit in the front seat or take the car on Friday night. It’s not always smooth sailing, nothing worthwhile ever is.

And I feel their pain now that I am raising daughters who are sisters. Seriously, if there is one thing you learn quickly once you become a parent it’s that payback is never fun. I’ve mediated arguments over stuffed animals and who had “the good spot” on the couch and who took whose shoes without asking to the point of wanting to just put them all back on the naughty step even though a few of them are now as tall as me.

But the memories of the arguments I had with my sisters while growing up are now so very hazy, as I know they will someday be for my girls.

My good memories on the other hand are crystal clear. Memories of endless days building forts in the backyard or in the basement. Memories of playing Barbies for days on end. I can remember not only which Barbies were mine but which were theirs and the stories we would create as we played.

Memories of forming imaginary rock bands and reenacting movies we had seen….singing the same songs over and over at the top of our lungs so badly, but thinking we sounded just amazing.

Memories of endless card games spent eating cookie dough and whole bags of Doritos washing it all down with this new soda called Cherry Coke.

Memories of swimming in the pool and walking in endless circles to make the water swirl around us, using only the strength of our super small calf muscles. Memories of keeping each other’s secrets and knowing all of the ins and outs of each others bedrooms and wardrobes and lives. 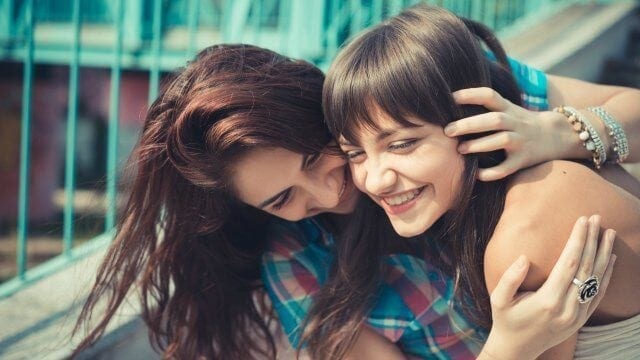 And what came out of these years growing up with sisters is what I have now. It’s what I dream for the sisters I am raising. It is a group of people that make my life richer and know me in a way no one else does.

I believe the bonds of sisterhood stretch and grow in a way that is stronger than pretty much anything other than maybe parental love. These bonds go beyond disagreements and differences. The four girls in my family couldn’t be more different in so many ways, but no matter what goes down, my sisters have my back in a way no one else ever will.

Now to remind the girls I’m raising that they will be glad they didn’t kill each other someday, and not only that they should thank each other for making their world a better place. They may just have to trust me for now because I’m pretty sure there’s about to be another fight over the front seat. Or shall I call it another chance to practice their conflict resolution and build empathy? Either way, sisters for the win.