Like most mothers, I feel hyper-aware of how others treat my children. When my kids are included in activities and made to feel important and welcome, I notice that I feel grateful.

And when they get excluded, as can happen sometimes, I notice that too and I usually bite my tongue because I never want to make a scene.

Instead, I talk to my kids when they react to being excluded.

But one woman on Facebook noticed a very public display of her sister, Morgyn, being left out and she wrote about it in a now viral Facebook post.

Jordyn Poll from Toronto, Canada, posted two seemingly identical photos of a junior high school cheerleading team in Utah that her sister, Morgyn, is on.

Jordyn told ABC4 that she was “heartbroken” to see the exclusion of her sister, Morgyn, who has Down Syndrome.

The first one shows 26 beautiful, smiling girls in cheering uniforms.

The second one shows 27 beautiful, smiling girls in cheering uniforms. The difference?

The first one was printed in the annual school yearbook, and the second photo, which included Morgyn, was not. WTF.

Poll wrote about the incident with her sister in her now viral post,

“I’ve sat and thought about what I wanted to say, and honestly, nothing I say will ever make this okay.”

She explains that the students shown in the image are the “cute junior high cheer team.”

But, the photo that included one girl, Morgyn (found front and center), didn’t make it to the final printing. What’s worse? She wasn’t even mentioned. Literally, the team didn’t have her name printed as being a member of the cheer team.

“I hope that no one ever has to experience the heartbreak that comes when the person they love comes home from school devastated and shows them that they’re not in the picture with their team.

I hope that no one ever has to explain why people deliberately choose to be exclusive,” Poll writes.

She points out that the school had multiple opportunities to avoid this exclusion.

No one just takes a photo, and BAM, it gets printed in one fell swoop. A yearbook is a huge undertaking that requires pulling together tons of images and text, and surely, there are editors watching over the process to ensure that things such as tone and accuracy are nailed. But, no. Apparently, not.

“There were two photos: one with Morgyn and one without. A choice was made on which photo to submit, a choice made MULTIPLE times, and a choice that excluded Morgyn EVERY. SINGLE. TIME,” Poll writes.

She goes on to explain that this isn’t the first time that the school has left Morgyn out.

Three years ago, according to Poll’s Facebook post, Morgyn was totally left out of the yearbook. Her name wasn’t even mentioned.

“We contacted the school administration this year, and the answer we got was as ignorant as the photo.

To the Shoreline Junior administrator who blatantly said they didn’t know what we were expecting of them & there was nothing they could do, I hope you can take this away – you can be better, and I expect you to be better,” She writes.

Guess what the front of the Shoreline Junior High School yearbook has printed on it? Poll writes reads,

“I don’t care how insignificant you think you are, one person can absolutely make a difference.”

I’m sorry, is anyone else cringing right now? Because I am. The audacity.

Poll finished her Facebook post with a serious takeaway that I hope everyone is paying attention to,

“Please, be the one person whose actions are inclusive. Be the person who stands up for what’s right and makes a difference. Teach those around you, kids and adults, to look around and see the Morgyn’s being sidelined. We are better than this. It’s about time we start showing it and it’s time we hold each other accountable for it.”

Her post is quickly grabbing tons of attention because no family wants their children to be excluded.

In 24 hours, it has been shared 5K times and attracted more than a thousand comments.

One Facebook user wrote, “They took two separate pics with the intention of leaving the child out of the picture in the yearbook. Total crap and whoever did this should be ashamed.”

Another agreed, adding “They should have to eat the cost of reprinting the yearbook correctly!”

And others are downright pissed about this level of assholery.

One person wrote, “Now you have to be a real sumbitch to do that. Prayers for the souls of those that thought that was going to slide.”

Some people, however, missed the entire point of this and took umbrage with the fact that Morgyn isn’t wearing a uniform.

They missed the part where Poll explains that she went to every practice, learned all of the dances and moves, and passionately cheered on her team, which is, you know, the point of cheerleading.

The fact that Morgyn has Down Syndrome, and therefore has special needs, just makes this story even more horrible and awful.

But no matter who the child is, no school should be excluding any child for any reason. Poll also shared an update that the girls in the photo are Morgyn’s friends, and the problem came from the administration, not the girls themselves.

However, this girl worked hard and was an equal member of the cheering squad, but the school decided that that wasn’t good enough to be mentioned in the annual yearbook?

Isn’t a yearbook a culmination of all the effort and spirit that it takes to make a school great?

Shoreline Jr. High in Utah wrote an apology on their Facebook page as follows: 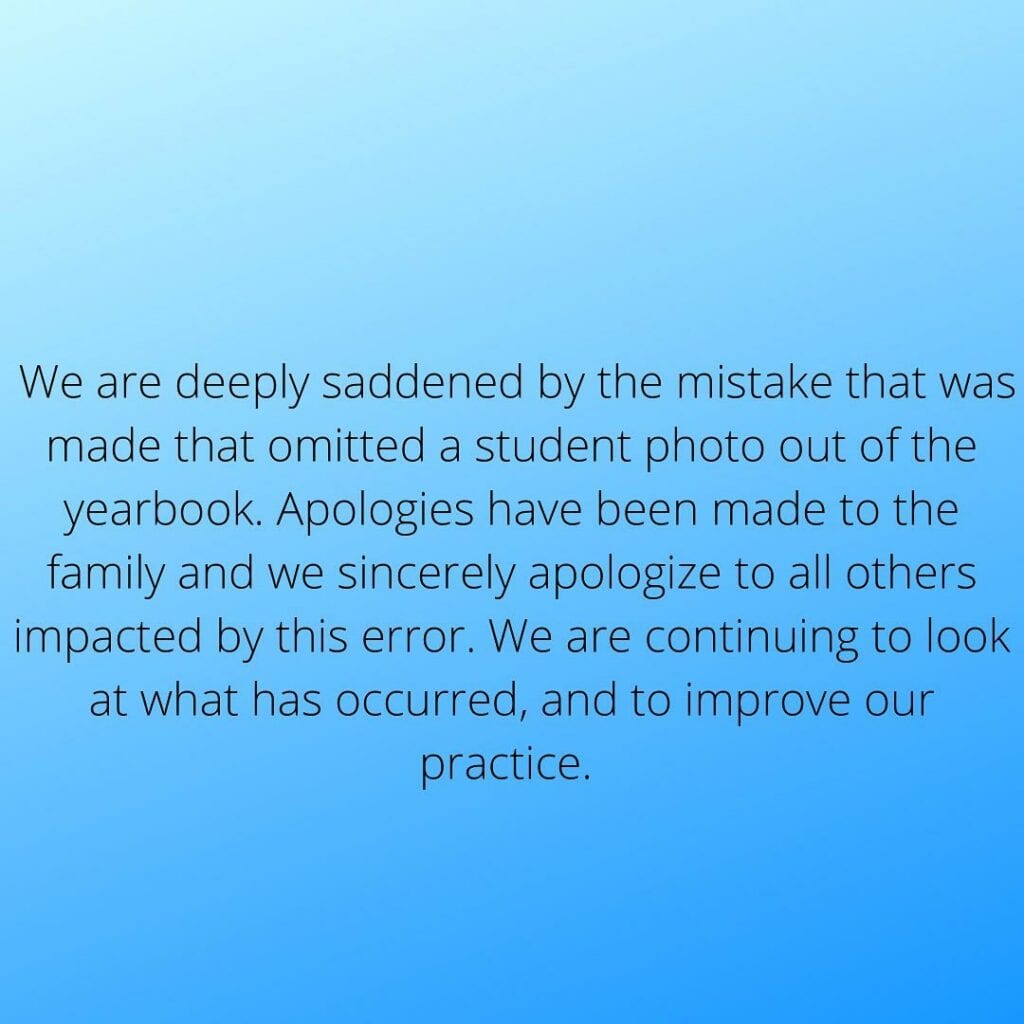 I for one, hope that the school Administration does the right thing and apologizes and reprints the yearbook on their own dime.

Morgyn deserves to be treated as an equal. And honestly, after this fiasco, she deserves a full page in the yearbook in our opinion, because it’s obvious by the community outrage that she is truly loved and was most definitely part of the team.