I was five the first time I watched a scary movie (I have my babysitter to thank for that.)

It was some campy, low-budget film about a group of teenagers on a small island, hanging out in a graveyard, in the middle of the night (and we allll know how this one ends) called ‘Children Shouldn’t Play With Dead Things.’

By the time those zombies boarded a boat and went off into the world? I was good and fully traumatized.

While my babysitter may have thought it was a good idea to expose me to my first horror flick at the tender age of 5, not everyone would agree.

Elissa Hope Andersen, who according to her Facebook profile is a “children’s director, aunt, sister, and dog mom,” is firmly against exposing young kids to all things scary and she’s not afraid to speak out about it.

In a Facebook post that has gone viral with over 15K likes, 55K shares, and nearly 7K comments, Andersen argues that it’s a parent’s job to “protect the innocence of the child.”

That includes not letting them watch Stranger Things or Dr. Strange, apparently.

She starts out by saying:

“Parents, hear my heart: don’t expose your kids to scary things. Your eight year old does not need to be watching Stranger Things, your 10 year old doesn’t need to see It 2.

She explains that “fear is a dangerous thing.” Adults may be able to separate fact from fiction, but kids have a harder time differentiating between the two.

As someone who works with kids, Andersen says that kids share with her about having nightmares and not being able to sleep because they’re scared.

And they’re scared because of something they’ve either watched or played.

“I always ask “what made you afraid?”

The answer Every. Single. Time. Is something they watched or played.”

“A parents job is to protect the innocence of the child. Letting them play Hello Neighbor is not protecting them. Letting them watch Doctor Strange: Multiverse of Madness is tearing away their innocence.”

She ends with a plea for parents to censor what their child watches and plays.

She asks parents to ignore the whining, the complaining, the crying and begging when it comes to kids wanting to watch what their peers are watching, and to take a hard stance.

“It’s so hard for a child to overcome fear.

They already feel like there are so many things they can’t control.

Emotions are hard to navigate as a kid. Don’t make it harder on them by allowing fear into their lives.

Adults need to do the hard things so kids don’t have to.”

Based on the comments, the post has people divided.

On one side are all of the people nodding their heads in agreement. On the other, all those in favor of scarring their children for life (I jest).

Many of the commenters simply said, “Amen!” and “I agree” and “Truth,” including a 5th-grade teacher who can’t believe the things her students have been exposed to.

Others took the opposite view and see no issue with exposing their young children to scary things:

As for what parents should be doing in lieu of shielding their children from the Walking Dead? According to this guy, you should try teaching them to overcome their fears instead.

Look, I get where Andersen’s coming from.

I have three young kids. Do I monitor what they watch and play? Absolutely.

Are they snuggling up with me on the couch while I binge-watch the latest season of Stranger Things? No. Did they watch Squid Game? Also, no.

Are we watching Thor: Love and Thunder and the latest Jurassic World Dominion movie? You bet we are.

I’m a product of the ’80s and all the cult classics that go along with it. By the time I was 9 years old I was going to sleepover parties where Freddy Kruger and Jason Voorhees were the main headliners.

I stood in the bathroom at school countless times with my girlfriends, giggling and terrified, as we turned off the lights and dared each other to say Bloody Mary three times.

I heard the Jaws theme song every time I entered a lake or pool.

Forget Sweet Valley High, I was reading Flowers in the Attic and Stephen King novels when I was 12.

And I live to tell the tale. But do I still run up the basement stairs when the lights are off? Yes, yes I do.

Personally, I think you know your children best. If you feel that they can handle a jump scare or two, go for it. If they seem to be sensitive to it, you may want to hold off until they are older.

What do you think? Are you team scary or not? 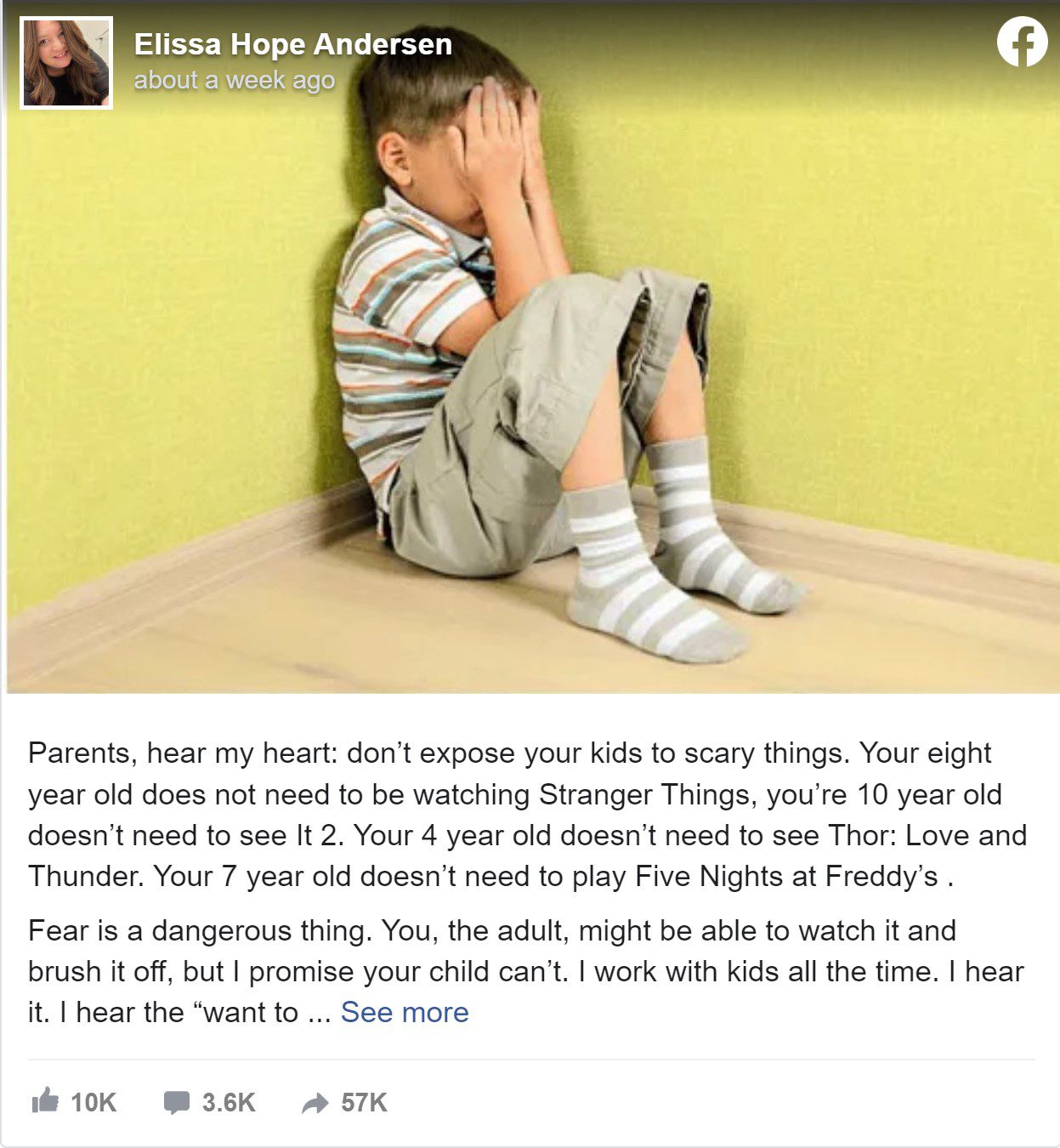 The school year has barely begun and already school dress codes are having a moment. And not a good one … Read More

FB Clothing Ad Has Us Wondering How…

There are times when I swear to God, I will be saying something in my house, and my phone will … Read More