I’ve spent most of motherhood on the sidelines. Have you?

Sometimes it was simply because I was tending to the needs of my children, making dinner, folding clothes, or any number of countless other obligations that tend to fall under the banner of ‘mom will do it’.

But sometimes I’ve found myself watching instead of participating out of fear–of what others might think or how I might look.

If I could still do at 30 what I did at 17 or even if I SHOULD be doing it because I can’t even dress myself for my age because there is no Forever 37 shop.

So today I decided to shun the onlooking Judgy Karens and jump in. Both feet, socked and sweaty, I took our extreme child to his choice of reward for a great week at school. Instead of eating ice cream or sitting at the movie theater, I made the conscious decision to jump.

That hour at the trampoline park yesterday was the hardest we’ve laughed together in as long as I can remember. 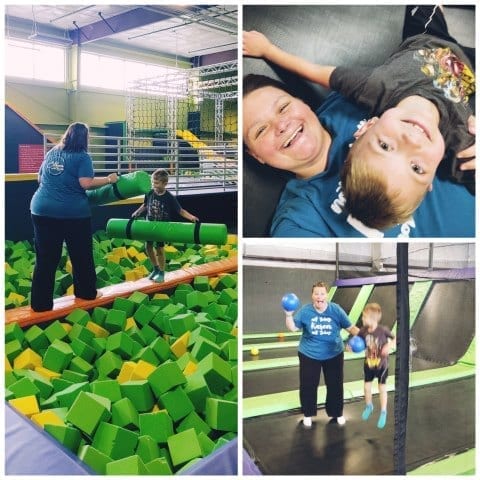 It wasn’t a pity laugh. He wasn’t embarrassed of his mama.

This was real, live, unadulterated belly laughing of the best kind. And friend, you don’t get that kind of cardio from the sidelines.

I know that being an adult is weird and being a mom is usually far from glamorous.

I know that I’m far more likely to be found in a messy bun and yoga pants than anything you’d find not paid for through Prime.

But let me tell you a secret.

Being there yesterday–I mean really being present with my boy–brought me more joy than any fear or worry was ever worth on the sidelines.

We jumped, we bounced, I DOMINATED about six young children in trampoline dodgeball because obviously I felt a moral obligation to impart the spiritual wisdom and life lesson that comes from losing to a mom bod who is closer to retirement than her teenage years.

So friend, make the choice today to show up, be present, and jump.

Stop being a bystander in your child’s life because they won’t remember your clothes or if you had to fix frozen pizza because it was too late to make a meal from scratch.

They will remember you sledding with them or coloring pictures, puddle jumping in the rain and diving into a trampoline park with both feet because their memories are made in those moments of sheer joy and laughing with reckless abandon…and you deserve to live those moments, mama.

I've spent most of motherhood on the sidelines. Have you?Sometimes it was simply because I was tending to the needs of…