I’ll admit it, I was naïve. Very naïve.

I imagined it would be the same as it was when it was just the two of us, only with a tiny little third person thrown into the mix as a finishing touch.

Like the cherry on top of the cake. That light cocoa dusting on the tiramisu. The mint garnish on a perfectly mixed mojito.

My partner and I had a brilliant relationship and having a baby would make it even better.

We’d lovingly gaze at each other and then at our child. We’d go for walks in the park, the three of us. We’d snuggle up on the sofa together. One happy family. Just like you see in the movies, on Instagram and in those commercials for changing units, strollers, wet wipe preheaters and all that other overpriced baby-related crap you don’t really need.

Oh, how stupid I was. Having a baby didn’t make it better. Not at all. It almost wrecked my relationship.

It wasn’t even the baby’s mistake.

Our little daughter didn’t do anything apart from being, well, a baby. Although I do have to say that dealing with poo explosions, projectile vomiting and spending hours and hours pacing back and forth in the living room with a screaming baby who’s suffering from colic didn’t appear in my picture perfect daydreams. (Yes, I was naïve). 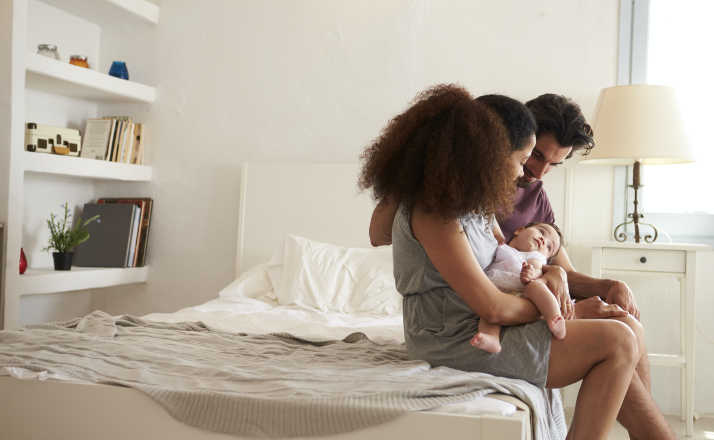 Mainly it was me.

I’d resent him for not having boobs, so I was the one who had to get up in the night to feed our daughter. For coughing too loud which woke up our baby just after I’d spent half an hour getting her to sleep. For not smelling that she had a soiled diaper.

For leaving the soiled diaper on the bedroom floor after changing, instead of properly disposing it in the nappy bin. For his utterly useless attempts at trying to carry her in a sling, until the point where I’d take over and did it myself.

Just like I did with comforting her, bathing her and putting her to bed.

We’d always divided everything equally, from paid work to housework, but now it seemed like this little new addition to our family was for 90% my responsibility.

On top of all my other jobs. I wanted to scream at my partner for having the complacency to sit down on the sofa and chill when our baby finally slept, rather than cleaning the house, washing the dishes or loading the washing machine. Or doing one of the billion other things that needed doing.

Gone were the nights we’d drink bottles of wine together until midnight, talking about our dreams to travel the world and laughing at stupid TV shows.

Since the day she was born, all our conversations were about our daughter: when was the last diaper change, did she already have her vitamin drops today and where the f*ck did you put her dummy because I can’t find it and she’s screaming so loud the neighbours might complain.

In the evenings I was so tired I fell asleep before even turning the telly on.

Night after sleepless night the resentment built up.

There was so much resentment and I didn’t know where it came from. Probably from a lack of sleep.

I became furious to the point I’d have hit him if I’d hear him snore one single time more.

That’s the moment he moved to our living room sofa, where he’s been spending every night since. Sleeping in separate rooms is not good for your sex life.

Just as extended and responsive breastfeeding isn’t good for your sex drive. Getting your tits out whenever your baby is hungry might sound very sexy. Trust me, it isn’t.

Neither are the oversized granny pants (the only thing you can wear after a vaginal birth with episiotomy and infected stitches) or the maternity bras. What’s also not sexy is wearing a t-shirt that’s covered in baby vomit and still smells of breast milk gone sour.

It wasn’t just the sex – read: the lack of it – but also the fact that I’d prioritise my baby’s needs over his.

When on my way to the fridge to get him a beer I’d hear her cry out for milk, well, guess who gets their drink and who gets told to ‘f*cking get his own beer because can’t you hear I have something better to do?!’

I wouldn’t listen to his stories anymore. An important work project he’d finished? To be honest, I couldn’t care less.

I was so focussed on our baby’s milestones; from her first smile to the moment she first managed to roll over to her tummy, that I forgot to give my partner any attention. Meanwhile, we drifted apart.

There was no ‘us time’ anymore, as it was always the three of us.

When she’d sleep during daytime, I’d work. At night, I’d also be asleep. Date night? Excuse me, did you seriously suggest I’d manage to and stay awake after 9pm? And leave my baby in the care of someone else? No way – what if something would happen?!

A friend once told me couples should be forbidden to break up in the first three years after getting a baby, because you’re just not yourself. She’s right.

The combination of hormones, new responsibilities and a huge lack of sleep f*cks you up big time. My partner and I will get through this.

When we finally get to the point of being able to sleep more than four hours in a row, I hope we can become this happy loving family. The cake with cherry on top.

One thing, however, will never change and it scares the hell out of me.

The most important reason that having a baby didn’t improve our relationship, is that I love her so much. I love her more.

More than I love her dad.

Even though I love him loads, it’s her I easily love a million times more.

My partner comes in second place, which isn’t a nice place to be in a relationship. Should I have to choose between my daughter and my partner, my child would win hands down.

How Much Damage Does Lockdown …