What do I want for Mother’s Day this year? Oh, honey, you’re so sweet to ask but you and the kids are all I need….JK!

Guys, if you think you’re getting a pass this Mother’s Day, you are sorely mistaken.

Mother’s Day is one of the only thing we taken-for-granted bitches have going for us. And you better believe we’re gonna milk it this year because we’ve been the glue that has been holding this past shit-show of a year together for our precious loved ones.

That’s right, our day is almost here, guys. And you better not blow it.

If you think a sappy card is enough, you’re wrong.

If we tell you to your face that we don’t need anything special, don’t buy it… it’s a trap!

Whatever it is we’re not telling you to buy, we want it, we need it and we’re gonna be pissed if you don’t figure out what it is and give it to us.

Am I understood? Homemade cards and Mother’s Day Eve shopping at the neighborhood Walgreens isn’t gonna come close to cutting it this year.

So you better be planning ahead.

And while all moms are in need of some major love, there are some moms who need to be spoiled a little bit more this Mother’s Day:

Obviously. But that was basically every mom during the pandemic so now we’re all looking for bigtime reparations!

After taking care of business from 9-5 at the office, she has comes home and cleans up your messes. Regardless of her title at work, at home she’s more than likely the family CEO, responsible for managing the budget, the crazy, ever-changing schedule, and the handling of the day-to-day everything for you and the kids.

Don’t overlook her! She may not have popped out your pride and joy just yet but she is literally making that baby inside her badass body and toting it around while you go about your regular business.

Plus you realize that she’s super hormonal and everything is already your fault so you better treat her right on Mother’s Day… starting now! 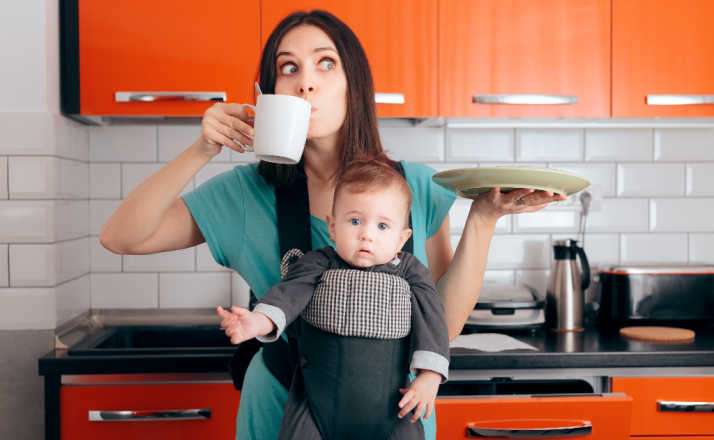 The Mom of Littles:

Bless her heart, she is in the thick of wiping butts and taming tantrums. The kids are stuck to her hip all day and they wake her up all night because they’re thirsty.

Or have to go potty. Or had a bad dream. Or just because they need a hug.

Girlfriend can’t catch a break so she really deserves a whole lotta love from you this Mother’s Day because she’s got a long road ahead.

The Mom of Teens:

She is uncool, underappreciated and super lame. Just ask her teens, who –when not behind closed doors – spend most of their time eating everything she just bought at the store, asking her for money, or rolling their eyes at her.

The poor thing spends weeknights cramped behind the wheel, sitting forlornly in dark parking lots so that you can live vicariously through your kids on the weekends as they hit homeruns or score goals. Not to mention that she spends weekdays navigating the school drop-off lane full of morons … enough said?

If you happen to be dating a single mom than by all means make sure that she is treated like the queen she is. She is shouldering a lot in this role and if her ex or her kids aren’t showering her with love on Mother’s Day, than you better step up!

You may think she has it easy now that her own kids have grown and flown. But she has been there, done that and earned the respect of all of the moms described above.

Sure, she can “borrow” your kids and then return them back a few hours later and do whatever the hell she wants. But she has totally earned that right.

She took care of her own kids, no doubt lost hours of sleep worrying about them and dealing with their shit, and now she has come out the other side. Respect!

Guys, do you see a Mother’s Day theme forming here?

Just in case you’re still digesting, the takeaway here is that every type of mom needs and deserves much love on mother’s day, no matter what phase of motherhood she’s enduring.

So, if you suggest making brunch reservations and she pooh- poohs it, call the restaurant anyway.

If she tries to tell you the spa appointment is too much, book it regardless. If you insist that she sleep in while you wake up with the kids on Mother’s Day, then you’re finally catching on. (But you should be doing this every weekend!)

We’re pretty much down to the wire here on the Mother of All Mother’s Days, guys. We get that we’re putting a lot of pressure on you this year.

But can you blame us? Besides, we know you will deliver. And if you treat us right, we won’t forget that Father’s Day is just around the corner.

Strong And Meaningful Boy Names To Consider For Your Baby

Pregnancy Test Calculators Can Help You Decide When To Test