I never gave much thought to car seats until I was pregnant and preparing to welcome my first child. At that point, I found myself deeply immersed in websites, consumer guides, and safety manuals. That’s when I first learned that car seats expire!

Prior to that, I assumed expiration dates were pretty much exclusively for food. I knew we wanted to have several kids. I was hoping we could use the same car seats for each of them, so I wanted to know: How long are car seats good?

As it turns out, the answer varies by the manufacturer (and even within a particular manufacturer). Still, I learned that if I wanted to have several kids share the same car seats, those kids would need to be relatively close together.

How long are car seats good?

For Britax, their expiration dates seem to vary a little more widely. The quickest expiring seats are infant seats. Those car seats are generally good for six years. Their click-tight convertible seats are good for ten years. And of course, they have several other car seat options that expire in between those two.

Chicco gives no generalized guidance on its website about its car seat expiration dates. It solely refers you to the date printed on your seat. Still, for general planning purposes, it’s probably safe to assume the lifespan of a Chicco car seat is similar to the others already discussed.

Evenflo states on its website that nearly all its car seats expire six years after their expiration. The only exceptions are some of their all-in-one or combination seats, which are good for eight years.

As you can see, it’s hard to establish a hard-and-fast rule for a car seat’s expiration. Nevertheless, if you haven’t settled on a specific model and need to do some general planning, six years is a good rule of thumb.

Why do car seats expire at all?

Car seats expire because safety features change. Manufacturers are constantly updating the materials and technology they use in car seats. At a certain point, what was once considered a cutting edge, very safe car seat, will become relatively obsolete.

This is true of any technology, but car seats hold our most treasured people during their most dangerous activity. (Automobile accidents are the number one cause of death for children.)

Aside from the evolution of safety features, there’s also the possibility of mechanical breakdown. Car seats may become less effective over time. Their padding may wear down, the straps may weaken, they may crack or corrode, depending on how carefully they’re used, stored, or transported.

There are good reasons these car seats expire. They’re not safe to use indefinitely. 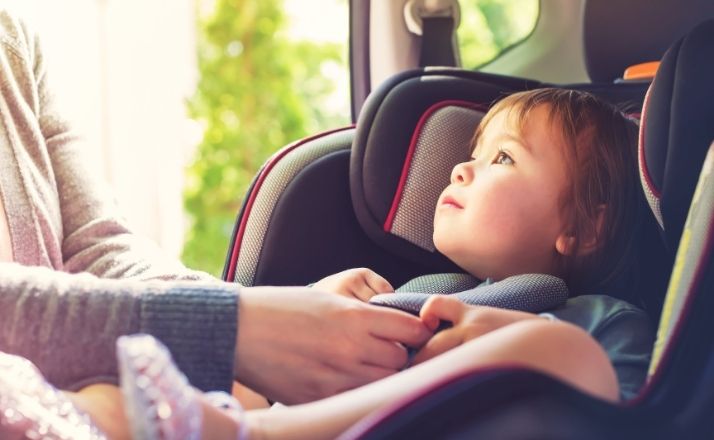 How do I know if my car seat is expired?

Most car seats will have a little sticker on the side or bottom. It will tell you either the date it was manufactured or the expiration date (or both!).

Honestly, it’s a real pain when the company only prints the manufactured date because then you have to turn to Google to find out how long the car seat is good.

Using the internet, dig up the manufacturer’s website or an electronic copy of the manual (unless you still have yours, in which case, I salute you). They should tell you when your particular car seat model expires.

Is it safe to use an expired car seat?

In short, no. As previously discussed, expired car seats may have outdated safety features. The safety features they do have may be compromised due to the age of the materials.

On that note, I also live in the real world. If your only choice is between using an expired car seat and no car seat at all, those are generally a crappy set of choices. Maybe you’re out of town and the rental car company left you high and dry. Maybe you, unexpectedly, need to transport an extra kid you weren’t planning for and no one can lend you one.

Whatever the circumstances, in a situation like that, personally, I’d use the expired car seat. But then I’d use that expired seat to drive myself and the kid(s) to Walmart and pick up a bare-bones, unexpired car seat. It may not be the Rolls Royce of car seats, but Walmart sells a basic Cosco brand for around fifty bucks.

What to do with an expired car seat

You shouldn’t sell (or buy) an expired car seat. In fact, many car seat technicians recommend you cut the straps before you dispose of an expired seat to make sure no one else attempts to use it.

A great way to get rid of an expired car seat is to participate in a car seat trade-in event. Over the years, I know Target, Walmart, and Babies R Us have hosted these trade-ins (other stores may have them too).

You bring in the expired seat and the store will dispose of it, as well as give you a 20% coupon (although the discount may vary) toward the purchase of a new car seat.

It may feel like a drag to get rid of a car seat that still looks perfectly good. However, you really don’t want to take chances in this area. A well-appointed, up-to-date car seat is essential to your child’s safety in an automobile.