My son sleeps in “the Big Bed” every single nap time and most night times, too. He’s not a newborn and I’m no longer breastfeeding. He is four years old. Yes, I’m a cosleeper. But more like an unintentional cosleeper.

How did we get here? I certainly never would have thought I’d be the mom with the four-year-old still in her bed.

It’s not even a king-sized bed. And my son isn’t the most serene of sleepers. My husband calls our boy’s nighttime movements “JiuJitsu.” As in, “he was jiu jitsu-ing me in my ribs all night.”

Yet I’m not reading up on methods of getting your child to sleep on his own or scouring the internet for a solution.

There, I said it.

I never thought I’d be called an attachment parent, but I guess that is sort of what I turned out to be. 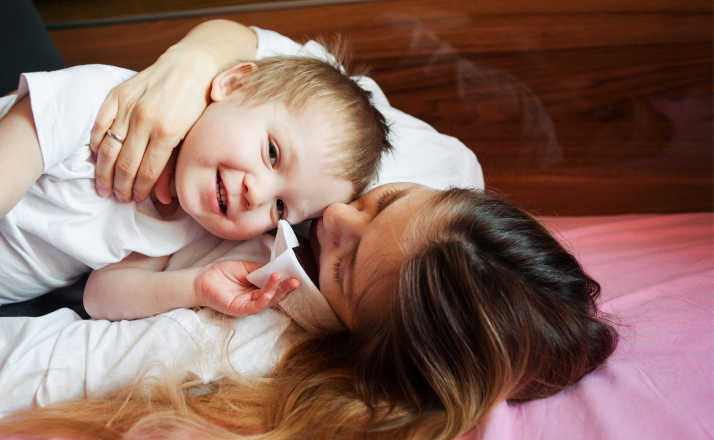 While I always planned on being a mom and knew I’d love my children with all of my heart, I couldn’t have possibly imagined the full body and mind sort of love it is.

I’ve never been able to find the words to describe it. The closest experience I can use compare it to is the infatuation of first love. It’s like how you felt about that first boy–the one you couldn’t stop thinking about during math class. The one whose stinky soccer jersey you took home and slept with, just so you could smell him.

That’s one facet of how I feel about my son.

And so I don’t mind at all when he jiu jitsus me through the night. I just want to feel the weight of his warm little body there and be able to kiss his forehead whenever I want.

I don’t know if I would have felt the same way if I became a mom in my late teens or twenties.

Back then, I worked as a nanny and am ashamed to say I would have been judgmental about a mama whose boy still slept with her every night.

But I didn’t have him until my mid-thirties when starting a family was a very deliberate decision. And it wasn’t an easy road. My husband and I had some struggles and a major loss on the way. I think that’s part of the reason why I want to savor every moment with him, even while we’re sleeping.

So, tonight when he squints his eyes, cocks his head, and asks so sweetly, “Can I sleep in the Big Bed?” I know I’ll give in yet again.

I’ll worry about it when he’s a teenager.