I stood at the edge of a dusty field in Southern Utah watching as Tim, the baby-faced social worker, passed out blindfolds–thick black ones–the kind the Taliban probably uses on their prisoners.

All around all of the other parents were putting theirs on, calmly agreeing to seal off their visual channels for who knows how long.

I‘d never heard of wilderness programs until our daughter Ellie came out here.

On the telephone, the sales rep said that the program had an eighty percent recovery rate.

It was much later that I learned that the success rate was probably closer to thirty-three percent and that even the successful kids relapsed.

I also found out that ten kids who died in these programs, the best known being fifteen year old Aaron Bacon, who starved to death in 1994, in the same place where I was right now.

As I stood here, blindfold still in my hand, all of this information scattered through my mind like so many snowflakes inside of a paperweight.

Then Tim shot me the kind of look kindergarten teachers reserve for the kids who won’t sit still at circle time.

I was too wiped, from flying out of New York at three a.m. and, besides, I don’t need a blindfold; I’m already physically and emotionally visionless

When Ellie was twelve she threatened to scissor her school uniforms into ribbons. I swiftly transferred her into another class and then another school unwittingly turning her into a tween pariah who found her home on the streets.

It was only after Ellie came out here and wrote her “letter of responsibility,” a confessional the kids are forced to write, that I learned that she’d been a shoplifter, a drug dealer and an alcoholic binge drinker.

Tim’s eyes were now trained on me like spotlights. I took my blindfold out of my hand and tied it on.

It trailed beneath the slope of my nose almost dangling into my mouth.
”Could I have a smaller size?” I started to say, but then I stopped myself. From the program’s parent reeducation CDs I knew that request would brand me as “entitled.”

Now Tim was ordering us into single file like a choo choo train. Dave took his place near the front.

I stayed behind–the caboose. We were going to walk across this field, the size of four city blocks, linked together in dark silence, the way our kids did when they were first brought here.

This blind walk, with its gulag overtones wasn’t in the promo video with its breathtaking landscapes and smiling, sunburned kids.

How did Ellie survive this in her mini skirt and flip flops?

Tim gave a walking lesson. “Lay your hand on the hand of the person in front of you and follow the rhythm of his steps.”

As I mimicked his movements, a hand reached toward me.

I crossed my eyes downward toward the tiny pocket where my blindfold bubbled up from my skin until I saw blue. Blue denim. The blue of Cyndi’s Ralph Lauren jeans.

I’d met Cyndi at this morning’s orientation. She was a skinny blonde, married to a stout, mustachioed car salesman twenty years her senior. At break time Cyndi’s hubbie told our group that one wrong move and he’d be sending their son to military school.

While the other parents swooned in horror, I quietly cheered. Miss these kids? No way.

At night, as Dave and I slept, Ellie took my car. She was fourteen. No license. No learner’s permit.

She did this every night for almost a year, until we caught her pulling into our driveway at dawn.

As we lumbered across the field, Cyndi’s hand felt soft, and warm, surprisingly maternal.

The walk was doing its job. My mental focus had narrowed to my feet; where to place them, so that I wouldn’t end up in traction.

Then I heard Tim telling us to remove our blindfolds. As I peeled mine off, the noonday sunlight flew into my pupils, but once my eyes adjusted, I could flowers marigolds, poppies, heliotrope, primrose and more, a desset blossoming with life.

Now Julie, a willowy woman-girl with a folksinger’s honey voice stepped up to the rock podium to read us a poem authored by a teenager.

The poem was about living in the moment, a good message for me with a mind like a haunted house.

Tim’s bullhorn voice shocked me out of my day dreaming. He was yelling telling us that the big moment was approaching. 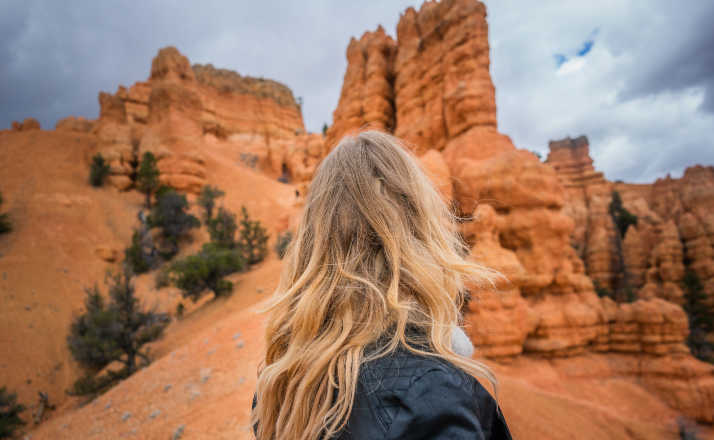 “There are your kids,” he said, pointing to a series of black specks on the next hill. All I saw was an undifferentiated smear of black.

Was Ellie really there?

I bit my hangnails and mouthed a prayer. Ellie and I hadn’t exchanged one word since she left six weeks before. Every week she faxed a letter home, but that was only because the program required communication with parents.

Otherwise, she’d forfeit some privilege like brown sugar on her oatmeal or spices for her rice and beans.

Every day, I responded with a bubbly “miss you darling” note, as if she were away at summer camp.

On Wednesday nights we got an update call from Pam, Ellie’s Wilderness therapist. Dave and I huddled together over one receiver, hanging on every word as Pam made us feel glad that our daughter was living in a place without beds, bathtubs, toilets, or toilet paper.

I loved Pam, her quiet laid back style and her Zen-like way of being soft and firm at the same time.

“Ellie was sassy, real whiny,” she told us one evening. “I said she needed to make her tone match my tone. “

“Make her tone match my tone.” I memorized that phrase, repeated it to my other kids, even affecting Pam’s drawl. On good days, I told myself that Pam was the reason Ellie had to come out here, the hidden blessing in this mess.

But now my faith was weak. I bit my hangnails as my stomach churned up sour juices and under my breath I prayed.

“Hug ‘em hard. Show ‘em all your love,” Tim yelled, his cheeks red and puffy like a football coach before a big game.

Suddenly, I heard a thundering whoop as if a herd of buffaloes was stampeding across the plains. It was them, two dozen teenaged boys and girls racing at us all wearing identical, dusty chinos and faded black T-shirts, as if they were members of one tribe.

This was the “run in,” the kick off event of the three-day long graduation.

Though this scene recurred each week–the program had rolling admissions and there were at least forty graduations a year– I felt like the first Mom in history to witness this moment.

All around me kids were running wildly toward their parents and families were dead-bolting in embrace.

Moms and daughters and fathers and sons were falling into each other’s arms, their voices forming a stereophonic chorus of “oh honey’s” and “I love you’s” and “I missed you’s.”

Some parents even took photographs, as if this was a scene they wanted to remember:

Here’s the place we sent junior when the only other choice was jail.

I expected to see piercings and tattoos, dreadlocks or Mohawks or blue hair, or all of the above, but these kids looked clean-cut, as if they could be honor students at some tony, suburban high school. The only exception was one obvious stoner, a sallow-faced boy, who wore his wooly cap down to his eyeballs in the mid-August heat.

After a few minutes the running stopped. The noise faded out as families dispersed, each heading to their own campsite.

Dave and I found ourselves alone.

“Probably behind some rock hoping we won’t find her,”

“Fat chance. They’ve got a staff to student ratio of one to one.”

“Yeah, but what if they really don’t find her? What if she ran away?”

All of a sudden Ellie appeared glowing like a movie star who’d walked off the screen or a baby who had just been born.

Her cheeks were ruddy, her thick, blonde hair was woven into two braids. She was bigger now. I couldn’t figure out how she had gained weight hiking all day and eating K-rations, but she had grown from nearly anorexic to almost pleasingly plump.

Earlier in the day, Tim warned us that our kids would stink because they rarely showered and weren’t allowed to use deodorant.

Ellie looked beautiful; her smell was as sweet as the wildflowers around us.

As she threw her arms over me, I felt like I was holding the old Ellie, the girl who wore frilly pink night gowns and drank chocolate milk instead of Vodka with Red Bull.

Then Dave hugged her, his glasses fogging up with tears.

Initially, Dave hadn’t even wanted to come. “You go. Represent us both, “he told me, but Pam applied gentle pressure, coaxing him into making the trip. Ellie knew about that.

“I’m so glad you are both here,” she said. Her grey eyes were wet.

Then the three of us linked arms and walked across the field to the place where Ellie had made camp.

How long would this moment last, all of us together and happy.

I didn’t know and I wouldn’t think about it. Not now.

Right now, I would just be in this moment, right inside of it.