These words describe how I feel as the mother of a child with limited verbal abilities who is inexplicably wasting away before my eyes, refusing to eat and unable to tell me why.

Evie is my five-year-old daughter on the Autism spectrum, and she’s been thriving in Kindergarten this year, making progress in many areas despite the mess Covid has made of things.

How is it possible that a problem like this can pop up so suddenly and coexist among all these milestones we’re meeting?

We’ve put in our dues, we’ve done the time, we played the game, we battled through disordered sleeping, sensory seeking, communication challenges, eloping and we came out on top.

We finally found our footing, we just hit our stride. We were on a roll!

The progress we’ve had recently makes this situation that’s unfolding even harder to swallow, makes it harder to acknowledge it as the impending crisis that it is.

A phone call from Evie’s daycare yesterday moved me past the denial stage and into action.

‘Evie is having a hard afternoon; she’s been crying for a stretch of time and we can’t console her. She’s tapping her head like she does when she’s hurting and when we ask if it hurts, she’s indicating yes. We’ve run out of ideas and when we ask if she wants Mom, she cries out in what seems like a yes. I’m not sure what to do, or what you want us to do, but she’s not herself.’

One can only exist for so long on goldfish crackers before it catches up to them.

There’s no more denying it, Evie hasn’t been herself these days because she’s malnourished.

She outright stopped eating a few weeks ago.

It was a Thursday last month that I realized Evie hadn’t eaten ‘meal food’ in days, not since the weekend before. 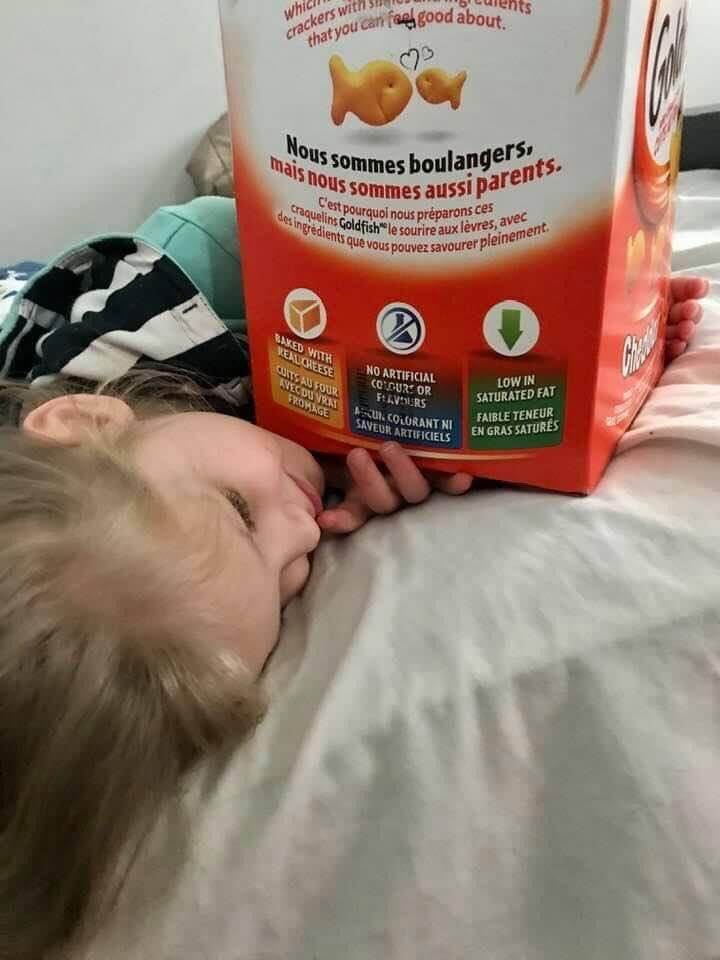 There are only two ‘meal’ foods on Evie’s list as it is, pepperoni pizza and chicken fingers or nuggets.

If you think that sounds limited, there’s more.

Brand, cooking method, texture and appearance matter to Evie, so getting a bite of her favorite Vern’s double-double pizza that’s too sauce heavy, or a bite of a chicken finger with too much batter can turn her off of eating altogether right in that moment.

She’ll refuse to take another bite, sometimes needing days to work up to giving that particular food item another try.

In hindsight, the elimination of food from her diet happened gradually; we’ve been on a path leading us to the place we’re at for a while.

First the ‘meal’ food went, then shredded cheese and drinkable yogurts. Pretzels, pickles, potato chips, and strawberries were crossed off next, followed by smoothies, milk and treats like ice cream.

Finally, the beloved green apple, the only fruit Evie has consistently eaten for years, was exiled.

With that we had arrived, our path had inconspicuously led us to a foreign place.

This place is filled with restlessness, with tummy aches, with sudden bouts of crying out in pain and discomfort.

This place is overrun with confusion, frustration, with hundreds of dollars of food purchased and left sitting untouched.

In this place, Evie wanders from cupboard to fridge with a pale face and tired eyes, always searching for something to satiate her but never finding it.

I’ve never felt so underqualified in my life.

Until now, my intuition as a mother has been my guiding force.

Listening to my gut has never led me astray, it’s the reason I was able to get such an early Autism diagnosis for Evie and has been a major asset in sorting out her mysterious behaviors and challenges.

Today, there’s a void where my intuition used to be, and no matter how hard I listen for that little voice that tells me what to do, nothing is resounding but questions that I have no answers to.

Am I blowing this out of proportion?

Is she coming out of a growth spurt that’s reduced her appetite?

Is she growing her molars?

How long should I wait to see if this is a phase that will pass?

Should I withhold goldfish to see if it will force her to eat something else?

Is this related to the tooth infection and dental work she had done in October?

Does she have a food allergy or intolerance that we don’t about?

Is she fighting some sort of bug that’s affecting her appetite?

What is the first step to getting some answers?

Is this a question for our family doctor or do I reach out to therapists we have worked with in the past?

What services and supports are out there when it comes to something like this, and will there be wait lists?

Are services on standstill because of Covid?

If feeding therapy is needed, how would we get Evie to the city for appointments with both of us working full time?

Will Evie need to get bloodwork done?

Will they have to put her under anesthesia again like they did for dental?

Is this her way of managing anxiety or stress?

How do I supplement her nutrition?

Evie won’t take multivitamins in any form including gummies, she can pick out flavors masked in drinks from a mile away and won’t touch meal replacements like Pediasure with a ten foot pole. She won’t even drink chocolate milk!

So I pulled out all the stops last night and did what every Autism parent has done or will do at some point on their journey.

I emailed and called everyone and anyone I could think of who might be able to offer ideas. I set up appointments with our family doctor, Evie’s social worker, Special Ed teacher, the Preschool program coordinator.

I posted on my Coops Troops supporter group to rally other Autism Mom’s for help, and I shared our troubles on my blog.

I connected with friends who might have specific insight or related experiences.

Maybe this silence is my intuition, after all, reminding me that motherly instincts aren’t my only asset.

Sometimes I forget that I’ve got an army of support at my disposal, both locally and virtually, and strength lies in numbers.

Perhaps the greatest asset of all is knowing when to ask for help.

For an update on how Evie is doing now, go here.