I’m no parenting expert by any means, but I really need to get something off my chest once and for all…

If you aren’t familiar with what the hell a lawnmower parent is…imagine the mom at the park that wipes down the beads of water from the previous night’s rain from the park slide before her kid can go down for his first run. Or the dad that won’t let his daughter eat off of the food court table without totally disinfecting the entire thing before she can dig in.

Think of what a lawnmower does….it clears the way.

It cuts down the obstacles so that anything following it’s path has an easier time.

In this case, the parent does whatever is necessary to remove any obstacles or hurdles their child may face for them, so that they don’t have to deal with anything too hard. In theory, this type of parenting is centered in trying to save the child from unnecessary stress and possible harm.

Listen, I totally get the desire to want to shield your kid from possible harm or doing what you can to protect them, what parent doesn’t feel that way after all? But, lawnmowers take this to the next level!

I have a few friends that are lawnmower parents.

One in particular is an extreme lawnmower parent. Let me just start by saying that I think the world of this friend. She’s a kind, loving and sweet person.

But, she is ruining her kid.

I’ve spent a ton of time with her at the park and have gone to play dates at her house with my kids, and to say that her child is out of control is an understatement.

When her daughter cries, my friend drops everything she is doing and runs to her side. I’ve seen my friend finally sit her ass in the chair to have a coffee with me, while my kids are running about, and her daughter will want the most random thing and my friend bends to her every whim.

Her coffee is always cold. The previously mentioned parents, yeah they are based on her. I can’t say that I’ve ever seen her daughter just left to have a tantrum and work things out on her own.

And while I love that little girl just as much as I do her mama, she is a brat. Not only does she expect my kids to cater to her, but she is like that with every other person I’ve seen her around. She’s a bully at the neighborhood park.

She has her snack served on the climbing apparatus on demand. She refuses to share with other kids that want to play with any of her toys (after asking nicely).

Why? Because she is not being encouraged to do any of these things. This includes forcing her to solve conflicts with other kids on the playground or learning to control the emotions that can only come with an occasional temper tantrum.

They need to fall down so that they can learn to dust themselves off and get back in there. They need to be allowed to problem solve with peers their own age, without their mom stepping in and doing it for them. These are all life skills that begin on the first play date and the playground. 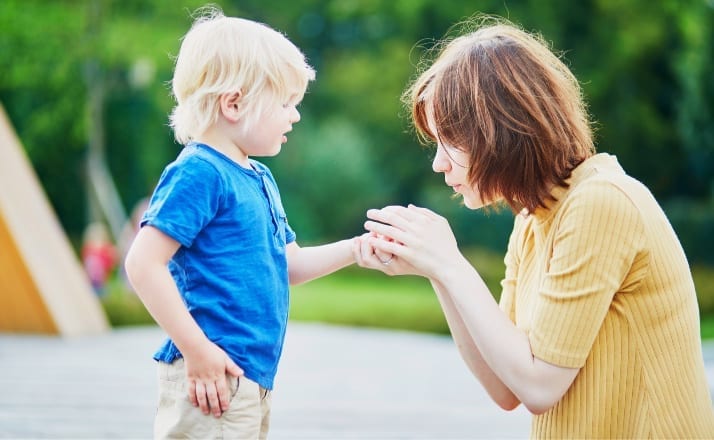 Being a lawnmower parent hurts us all.

It hurts my kid when your kid cries because he wanted to play with her toy and she couldn’t handle the idea of sharing so she screamed bloody murder and left him wondering what he did wrong.

It hurts your kid’s preschool teacher, who will now have to teach your child many of these problem solving and conflict resolution methods that you are not exposing her to as a lawnmower parent.

It hurts your spouse, who is not a lawnmower parent himself, because you are undermining his authority with the child you share together because she knows that if daddy says no, then she can just go to mommy (the lawnmower) who will of course say yes.

Above all, you are hurting your child.

No, I don’t think you are a child abuser or a terrible parent. Not at all. In fact, you are likely a better parent than the rest of us for your tireless dedication to your child’s happiness.

But, you are going to set her up for a lifetime of hard falls and disappointment if you are not letting her experience the minor bumps that she needs now as a young child, to learn coping mechanisms and how to deal with not getting things her way all of the time.

Plus, you are burning your candle at both ends here. While it’s important to put your child’s needs at the top of your list, it’s also important to look out for yourself too.

Your kid will live if she eats her lunch off of a food court table (with a tray) or if her butt gets wet on the playground slide. However, you need to back off and spend a little more of that effort on caring for yourself once in a while.

Please! For your own sanity, for your child’s development, for her future social life, for her ability to be resilient and responsible…stop with the lawn mowing already.

Having A Bad Day? Bring Along …

As parents, there are a lot of things that scare us about raising kids. One of the worst fears, of … Read More