We’ve all joked about the long hours trapped in our houses with our families while we collectively attempt to ride out this coronavirus pandemic in order to flatten the curve. But one serious note about lockdowns and stay-at-home orders from various state and national governments is the potential for a surge in domestic violence, which is no laughing matter.

So, when Malaysia dropped a hella tone-deaf campaign on Facebook this past week that warned women to “not nag your husbands” during the pandemic, the virtual shit hit the fan.

Malaysians, and world citizens alike, clapped back HARD and the ill-thought-out ad campaign has since been removed.

According to NPR, Malaysia’s Ministry for Women, Family, and Community Development plastered their social media channels with memes of how women should behave during the Covid-19 crisis. Using the hashtag #WomenPreventCovid19, the government body directly placed the responsibility and blame on women for how the pandemic is going.

Not only are women being asked to wear makeup and “dress neatly” but they are “to refrain from being sarcastic” while asking their husbands for help with housework. 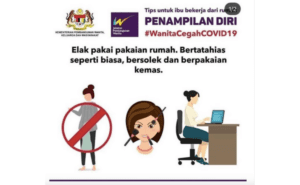 Twitter user, @honeytan was quick to point out the hypocrisy of the terrible messaging by the very government agency meant to protect families.

Avoid wearing home clothes. Dress up as usual, put on make-up and dress neatly. OMG! This is what Rina, our Minister of Women, Family & Community Development thinks is important during the #COVID19 lockdown? No tips on how to deal with #DomesticViolence? Just state DV is a crime. pic.twitter.com/FfswtPBIPH

The issue of spikes in domestic violence is so serious that in Spain and France, women are using code words to alert pharmacy workers they need immediate help.

CNN reported that during the Covid-19 lockdown in Paris, the city has seen a 36% increase in police interventions. In response, the French government is paying for 20,000 hotel rooms to help victims of domestic violence escape while also remaining safe from the pandemic.

In response, they have introduced an AUD $150 million (USD $92 million) package that aims to lend support to victims of domestic violence and sexual violence.

But, please, Malaysia, tell us more about how to please our husbands. FFS.

On March 18th, the Malaysian government told everyone to stay home but anyone had to go out for groceries or essentials that only the “head of household” is allowed to go. And while they did not specifically say, “only dudes allowed” it was apparently read that way.

Hordes of “heads of households” showed up at grocery stores looking baffled by how to shop or how to read a grocery list.

Suddenly, Facebook was flooded with snapshots of men standing in aisles staring at nothing or talking in a frantic way into the cell phones as they tried to figure out what the hell their wives were asking them to buy.

The situation got so bad that one major grocery chain in Malaysia posted a “How to Shop” guide for men.

You guys. This is something else…

To all the ketua rumah, we understand that things may get confusing at times like this. Use this handy guide for your…

As funny as this may be, the reality is that women are being told to be subservient to men during lockdowns in order to keep their husbands from flipping out and hurting their families.

Blaming women for their own abuse by placing all responsibility on them is both disgusting and does nothing to help women or to end a culture of violence.

If you or someone you love is a being abused there are ways to get help. Please check out this comprehensive list of resources listed by The Office of Women’s Health.