As parents, there are a lot of things that scare us about raising kids. One of the worst fears, of course, is your young child going missing.

Have you ever had that split-second moment of utter panic while shopping as you looked down, expecting to see your daughter at your side, and she wasn’t there?

Or how about that heart-pounding fear when your toddler son is nowhere to be found in your house. You run from room to room, frantically screaming his name, debating when to call the police… only to discover him sweetly curled up under the basement futon, fast asleep?

But there are those longer lapses of time when you can’t find your child, and the horrifying possibilities are enough to break you.

A mom wrote a Facebook post describing the harrowing experience of her son going “missing” for several hours recently, and every parent can relate to her heartbreaking panic.

For Kate, creator of the blog Finding Cooper’s Voice and mom of three boys, the dark late afternoon last Monday started out as a fairly ordinary one. Kate was loading the dishwasher and feeding the baby, no doubt in the typical pre-dinner-hour busyness that we’re all familiar with.

Her son Sawyer, 6, left the house at 4:17pm to play across the street.

It was still an ordinary day at this point, and as moms we’ve all been here, but in light of later events, these are the moments we beat ourselves up over. As Kate detailed, prior to Sawyer leaving, they had argued:

We had just finished an argument about Pokémon cards. I told him he couldn’t take them out of this house. He disagreed.

I yelled. He yelled back.

It was one of those classic mother-child power struggles, and as Sawyer left the house, Kate felt a moment of relief. It had “been a day”, as Kate put it, and the silence after the heated Pokemon debate was welcomed.

But as Kate later reflected on the day in her post, her mom-guilt was hitting her hard.

In the chaos I forgot to tell him to put on his Gizmo. My fault. I should have reminded him.

(For those that are unfamiliar with a Gizmo, [This is an Amazon affiliate link. If you click on a link, Filter Free Parents may receive a commission. See our full disclosure policy HERE.] it’s a kid’s watch that also has GPS tracking installed, so that you can locate your child if needed.)

Once dinner was ready, Kate sent a text to the parents of Sawyer’s friend to send him home, but he wasn’t there.

More calls and texts to several neighbors came up empty, too- still no Sawyer.

Neighbors gathered. Kids and parents went door to door. My sister-in-law came to watch the other boys. I started searching. On foot.

If you’ve ever been in a situation where you’ve realized that your child is missing, it’s a primal fear. Every fiber of your being NEEDS to find your child.

And your brain begins -despite not wanting it to go there- to imagine the worst possible scenarios of what could have happened to your precious child.

You can almost visualize Kate stumbling around in the cold, her flashlight narrowing lighting a path in front of her in the dark, as the thoughts tormented her:

I thought of the pond behind our house. I though of every ditch in our neighborhood. I thought of strangers and bad people and Jacob Wetterling. I thought of him in the back of someone’s car scared.

The worst possibilities, and as a parent, you know them, too. Has my child accidentally drowned? Is he or she lost somewhere out in the cold, frightened and missing me? Has he or she been kidnapped?? What could a kidnapper be doing to my child??

They are the most gut-wrenching, horrible thoughts, and no one wants to have them. But when your child is missing, you can’t help but fear the worst.

And then finally, the call to 911. Because Sawyer still wasn’t found, it was dark, and hours had passed. The operator asked Kate what Sawyer had been wearing… and that’s what nearly broke her:

I called my friend who is a police officer after. I said it was my fault.

And we all do this. As parents, we automatically blame ourselves. “I should have-” “I could have-”

But thankfully, Sawyer’s story has a happy ending. It turns out that he was playing in a friend’s basement quite nearby, just not the friend that Kate assumed he meant. He was right there, nearby, the entire time.

And he was SAFE.

While Sawyer was a bit nervous that he was in trouble (since the police located him), Kate was beyond relieved. She swept her boy up into her arms and hugged him tightly: 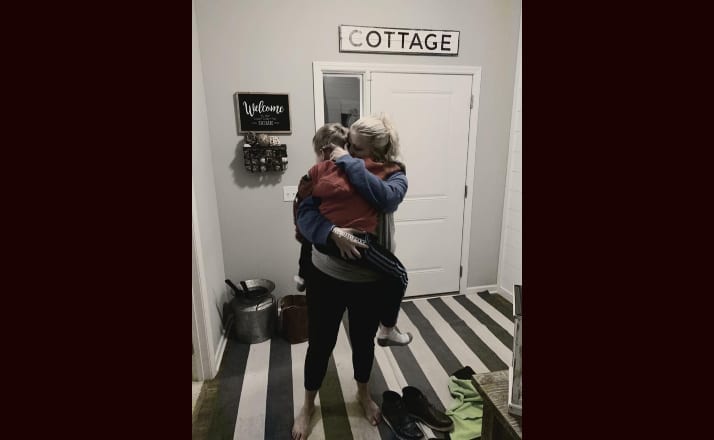 This is one of those hugs where you never, ever want to let go.

Kate’s vulnerability in sharing her experience should be commended, because it’s raw honesty. It can be tricky at best to share your parenting struggles or crisis without at least some judgement or criticism from fellow parent-shamers.

Sure, there are things Kate could have done differently. But I’ve been in the same boat as a parent, too.

So have the majority of you. While we’re not careless with our children, there are those micro-moments of distraction or busyness -LIFE- that can result in these types of situations.

We question every moment /decision of ours that led up to whatever child-related crisis we’re dealing with, & we blame ourselves.

No outside criticism is needed, because believe me: the parent beats him or herself up far more with self-imposed guilt than social media critics ever will.

If you read Kate’s post with the heart of the parent, you don’t dwell on the “should-haves”. You feel her fear. You imagine the worry as she searched, and maybe envision yourself searching for your own child.

You also feel the overwhelming relief she must have felt when Sawyer was safe in her arms.

Kate concludes her post with a poignant, valuable lesson for herself, which is also a lesson to all parents:

And it was a red sweatshirt by the way. I will never not know what my child is wearing. Not ever.

Beyond clothing awareness, there are several helpful steps you can take should your child go missing.

The Office of Juvenile Justice & Delinquency Prevention (OJJDP) provides a helpful checklist on what to do (and not to do) if your child is missing. May you never need to actually take these steps, but knowing them could be vital.

Kate’s post received massive support from fellow parents, & for good reason. We’ve all had moments of crisis & fear in worrying about our child, & we can all rejoice in knowing that in this case, Sawyer ended up safely back in his mama’s arms, right where he should be.

The scariest moments of my life happened tonight. On a Monday in November. A normal day. A dark night. Not too cold….