Filter Free Parents
Home Health + Wellness Mental Health Motherhood Broke Me. We Are Failing Mothers When It Comes To Postpartum...

I am one out of nine. Two years after giving birth to my son, my world stopped. It felt impossible to continue living with the overwhelming urge to stop his cries and to end the chaos in my mind.

The intrusive thoughts were obsessive. I was on the edge of psychosis.

This is not what I thought motherhood would be like when I decided to start a family. I didn’t imagine there would be so much suffering.

I remember the exact moment that I decided I wanted to become a mom. My partner and I were in bed. I rolled over to my side, taking the comforter away from my mouth so that I could talk to him.

My eyes waited for his response. I’m not really why there was such a strong desire to have a baby.

Growing up, I never dreamt of being a mom.

Maybe it was a biological response? We had been in a committed relationship for over two years. I guess the timing felt right even though I was only twenty years old. At that time, I didn’t question my decision.

Little did I know how much darkness there would be.

He agreed: we started trying for a baby right away. It was our little secret.

We weren’t going to tell our family that we were actively trying to get pregnant before marriage.

They were still adjusting to the fact that I was living with him. Plus, I read online that it took months for couples to get pregnant.

Two months later, I was pregnant.

Pregnancy was spectacular: I radiated with joy and felt like a goddess. I didn’t have any morning sickness. It was amazing.

And, surprisingly, my family was happy and supportive. While I was four months pregnant, we decided to get married. My husband and I didn’t argue over nursery themes, baby gadgets, or names. That year was magical. Everything pointed towards bliss.

Then, everything changed when I went into labor. My son was eight weeks early.

I knew there was a possibility of having him prematurely, but that wasn’t something I believed would really happen. Birthing him was hard and traumatic.

He was suctioned out of my birth canal after being stuck for what seemed like too long. After giving birth, they rushed him away.

It was four hours before I was able to hold him for the very first time. Luckily, he was okay. I held him against my breast, smelling his scent, not realizing that in months to come, I would regret being his mom.

At first, I wouldn’t sleep. I was afraid that if I did while he was sleeping that one of us would never wake up again.

Or I would miss his struggle to breathe, and his death would be on my hands.

My exhaustion brought paranoia. He couldn’t wear anything without it being washed.

I believed there was some sort of toxic residue that would eat away at his flesh.

The fear of his death morphed into my mortality.

I started to wonder if random bruises meant I had HIV. Was the pain that I had in my calves a blood clot?

Daytime would silence the fear of death.

I masked the paranoia with playdates, adventures, and get-togethers. As the sunset and friends returned home, loneliness crept in. I would lay awake, in total darkness, staring at the ceiling.

I didn’t want to be his mom anymore because I was so tired of the constant worrying. I wanted it to stop, all of it. It was pathetic that I couldn’t handle motherhood.

My destruction was unraveling in front of others, and my mask was breaking.

I started to become angry at my son when he cried out for me.

I couldn’t take it anymore. I laid in a fetal position on the carpet at the end of my bed and just screamed. The cries escaped with no fight. Motherhood broke me. 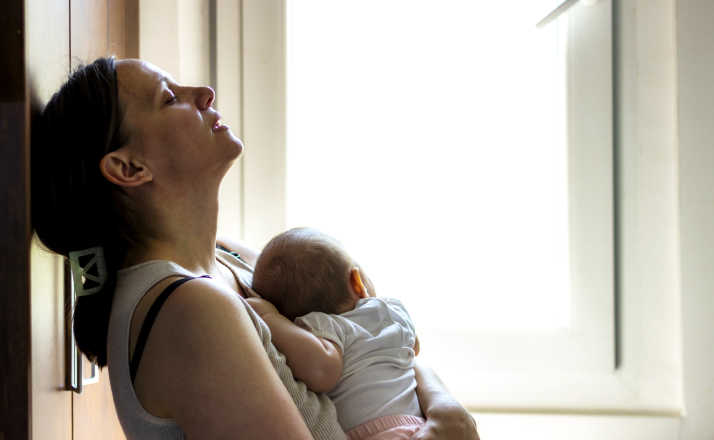 I wish I could write about what happened those days after my breakdown.

I remember feeling lethargic like I was underwater fighting against the current. Days later, I was sitting on the couch of a psychiatrist. My body shifted at the weight as my husband sat down beside me. I placed my hand within his grasps. The psychiatrist was a small, framed woman. Her desk was a shrine of paperwork for the people she fought to help. I exhaled.

My eyes closed. My chest vibrated against the labored breathing. My husband’s hand tighten around mine.

“I can’t do this anymore,” broke through my lips.

My head dropped in shame, afraid of what my husband or the doctor would think if I told them what was on my mind.

But, I couldn’t hold it back any longer. It was as if that simple question unlocked the gate of suppressed thoughts and emotions.

I told her how much I feared death and how I saw it everywhere.

I told her that motherhood was horrible, and I found no joy because all I felt was anxiety.

I told her that I didn’t know how difficult this journey would be, and I felt like a failure because I couldn’t handle it. And, I told her about the intrusive thoughts of wanting to silence his cries and end my life.

She connected the pieces to reveal that I wasn’t a failure. I was sick.

She stood up from her desk, walked over, and sat beside me on the couch. She placed her small hand on my shoulder to comfort my cries. Calmly, she explained that I had Postpartum Depression.

Even though I felt that these intrusive thoughts were unnatural, it was okay. In fact, they were normal. But because my thoughts became obsessive, I wasn’t able to see that they were irrational. They felt real and harmful.

I was told that there was a medication that I could take to help lessen the fears associated with death and motherhood.

Along with therapy, I would be able to manage the depression.

It wasn’t an instant fix, but I was able to enjoy life again. Most importantly, enjoy being a mother.

Unfortunately, during my pregnancy, little emphasis was placed on the importance of understanding the signs and symptoms of Postpartum-Depression, from my health care providers. I don’t recall a single conversation during my pregnancy about PPD.

There was more concern about the weight I gained than my mental state.

I remember as I signed the discharge papers at the hospital after giving birth, I was given a brochure about baby blues that they tucked away in a folder with perinatal care instructions. I never looked at it again.

During my six-week follow-up appointment, I was asked if I felt sad. I answered no.

At that time, I was tired, worried, irritable, and scared. But I didn’t feel sad. I don’t feel like there was any concern for my mental health.

The main priority at that appointment was my physical health and if I was healed enough to have sex again. During that time, I was too tired to question my mental wellbeing. And that was my last appointment with my OB-GYN. It was the end of my pregnancy journey.

For the first year of my son’s life, I saw his pediatrician frequently.

Every appointment, I was proud of how well my son was growing. Yet, I hid what I was dealing with because why would they care? It was his doctor, not mine.

And truthfully, I was too exhausted and ashamed to say anything. But, maybe, if just once, someone looked at me and asked if I was okay, it would have started an important dialogue.

The system failed me. The doctors responsible for my wellbeing, and my son’s, neglected to asked key questions about my mental health.

There were so many opportunities to discuss this, yet it never happened. Why is it the mother’s sole responsibility to diagnose herself with PPD?

Most of the time, she can’t even brush her teeth, let alone search for the answers that doctors can easily see.

There is a system in place that has the opportunity to provide education, access, and support, and it needs to be better.

As a society, we are failing mothers.

Postpartum Depression is not this rare phenomenon. It is as common as catching a cold.

But, unlike a common cold, postpartum depression can have severe and lifelong impacts on the mother and child. Mental illness does not discriminate. It affects one in nine moms.

That means there is a likelihood that someone you know has suffered at the hands of postpartum depression.

I was lucky enough to have a partner take me to see a therapist when I reached rock bottom. However, if that support from the team of members surrounding myself and my son was more vocal about PPD, I don’t believe I would have ever reached the depths of psychosis.

Open your eyes and pay attention to new mothers. If you suspect anything, reach out to her. Be her voice during doctor’s appointments. Help her.

Most importantly, to all the future mothers or new moms that cry in silence, there is a community here to support you. It is filled with other mothers that have sobbed in the dark, questioned their worth and value as a mother.

To find resources and information, head over to https://www.postpartumdepression.com to learn more.

Do you ever read about some wild antics in the news and think to yourself, what the hell was that … Read More

Kids will swallow the craziest sh*t. Since becoming a mother 12 years ago, I have called Poison Control a handful … Read More