I remember first hearing about the option of taking out a student loan to fund a portion of my college degree studies. You mean I can actually go to college? And not have to pay that hefty sum back right now, but some time in the way distant future when I’d be gainfully employed (rich, maybe? Did I assume I’d be rich??)?

NOW, many years later and many dollars lighter, those same two words “student loan”- evoke a mixture of disgust, stress, and the sinking reality that I’ll likely need to sell a kidney on the black market to pay just the interest on those suckers.

Thankfully, I’m not alone in the dollar-poor-pity-party that are those feeling oppressed by their excessive student loan debt.

In fact, there are those that would be willing to make big sacrifices if it meant their student debt could be wiped out of existence.

Based on a recent study, those in student loan debt are already making sacrifices due to their debt, & would be willing to do almost anything, including spending a week in jail, to eradicate their debt.

Your immediate reaction to the jail possibility above correlates to how much loan money you currently owe. If your first thought (like me) was, “Sign me UP!”, chances are you owe a nice big chunk of change to your student loan provider.

And you likely know who your student loan provider is quite well, based on their frequent reminders that your current bill is now due.

No shame- been there, my friend. Still there. 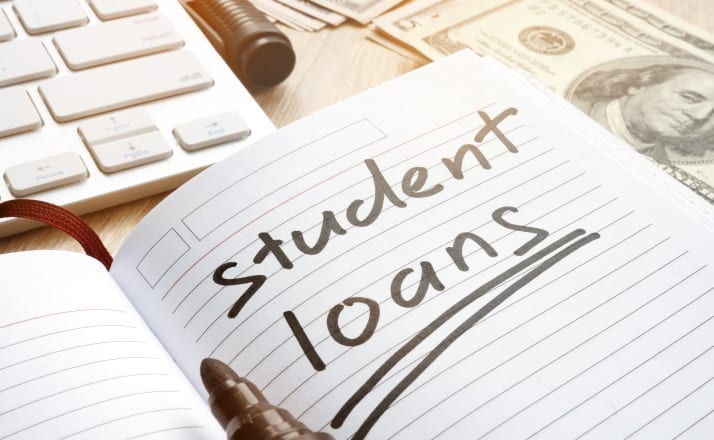 The study was recently conducted by OnePoll on behalf of their client, Splash Financial. 2,000 applicants participated: 1K undergraduates and 1K post-graduates.

The intention of the study was to grasp the impact that considerable student loan debt has on people’s lives, and the results were what you’d expect.

The participants completed a survey that detailed the types of sacrifices those in debt have had to make. Some of them are typical: 38% of respondents mentioned having to develop a very tight budget in order to afford their student loan payment.

Others, according to the survey, require further measures:

39% have skipped a social event in order to save money.

Ok, not the worst thing. We’ve all had times when we needed to curb our spending in order to make ends meet, loans or otherwise. But…

39% have also worked a side gig or second job in order to earn supplemental income to augment their salary in attempts to pay their loans.

Now we’ve got people working two jobs- simply to be able to pay their student loan bill. and the irony of the loan payment? The more money you make, the higher your monthly bill typically goes.

Here’s where it really starts to hurt, and not just the wallet:

43% called buying a house at some point “a financial impossibility” due to their loans.

35% could not see being able to afford to get married, or to raise a family.

The really painful one:

29% stated that due to exhaustive student loan debt, moving out of their parents’ house was not a financial possibility.

The reality: a whopping 89% of the 2000 people surveyed see their student loans as an overwhelming financial burden.

The study revealed a sad reality: 4 out of 5 people with student loan debt think of their educational debt as a life sentence.

So speaking of life sentences…. when it comes to ditching the debt, people are apparently willing to do whatever it takes to alleviate the post-grad payment pressure.

Those surveyed were given “alternatives” to paying their loans. If you could do “xyz” to eliminate your student loan debt, would you? Here are the options that were given in OnePoll’s survey, as shared by the New York Post:

While I’m vain enough to like my hair, if shaving it meant no more loans hanging eternally over my head, then bring on the bald- and 51% were willing to Sinead it with me! Hair is temporary, but student loan debt is (apparently) forever.

Ohh. Ohhh boy. This one hurts. I mean, a lot, since I’m pretty sure my personality IS caffeine. But not paying back nearly $100K could buy me a lot of decaf Starbucks lattes, so I think I could adapt.

Sure. And while I’m at it, I’ll skip dating what’s-his-name, work harder on my college applications, and use less Aqua-net hair spray. Debt-free and all the wiser: sounds like a solid deal!

(Besides, high school me & current me needs to have a nice, long financial talk about the implications of taking out student loans. High school me clearly needs a clue.)

I’m a mom that works from home, so I feel like I’m pretty much living this anyway. And if continuing to do so would give me loan forgiveness? Bring it on!

Ok, ok, this one was the least favorable option, drawing in a mere 39% of those surveyed. I get it. I’ve watched enough Orange Is The New Black to know that jail life is not for the faint of heart, but if Martha Stewart could cut it, so can I.

Not to mention, a single week of jail releases me from the life sentence of student loan debt that I’ve saddled onto myself. I’d say that’s still a personal victory, no??

While the debt-forgiveness propositions are of course in jest, the point is sobering. People that are carrying massive student loan debt feel worried and overwhelmed enough about it to be willing to go to great lengths to ditch it, if they really could.