Car seats are at the top of the list when it comes to essential baby gear. You can’t bring your baby home from the hospital without one.

And this is just the beginning.

For the next few years of your life, every time you want to drive anywhere with your child in tow, you’ll be strapping him into that 5-point harness. Good times.

But before you can even get to the buckling, you actually have to get your beloved offspring INTO the seat. Which, speaking from experience, can be its own little slice of hell.

If you know, you know.

If you’ve ever had the pleasure (and by pleasure I mean PAIN, so much pain) of trying to wrestle a child into a car seat who suddenly has the strength of a heavyweight champion and the abs of Jason Momoa and can hold a plank from now until eternity, my condolences.

Think reasoning works? Think again. There is no reasoning. There is only planking.

Sometimes with a side order of screaming.

As for cajoling, begging, pleading? Forget it. Bribing? Also a nope. None of it matters to your beloved offspring who has suddenly petrified into a slab of solid stone.

So what’s a parent to do? (I can guarantee you the answer isn’t in that 3000-page car seat manual.) Well, turn to the internet, of course.

New parents, Ben and Lex, took to TikTok looking for advice on how to get their 6-month old baby, Bennett, into his car seat.

And boy, are we glad they did. Because the answers are pure comedic gold.

The video shows Ben attempting to get Bennett into his car seat, and that sweet little baby is having NONE.OF.IT.

As the camera rolls, captions flash across the screen:

“Any advice for getting your baby into their car seat?

Our baby goes full rigor mortis every time we put him in.”

You can hear his parents laughing in the background. Because let’s face it, if you’re not laughing, you’re crying.

Dad valiantly tries to scooch Bennett down into the seat which only serves to fuel the fire in Bennett’s belly. Feel the burn, baby.

He arches his back even further and resists his father’s futile attempts with the sheer force of his iron will (and abs).

It isn’t until 22 seconds in when he finally capitulates and Ben enjoys the sweet taste of victory.

Ben captions the video with “Light as a feather, stiff as a board!”

Light as a feather, stiff as a board! #TargetHalloween #carseat #uppababy

The video has racked up 19.9M views and 41K comments in just 3 days. And trust me when I say, the comments don’t disappoint.

Starting with the experts. In bones, that is.

And while Buffalo Wild Wings doesn’t have any advice per se, they do offer a glimmer of hope.

Which elicits what may be the greatest response, EVER.

BWW weren’t the only ones to reference bones (or no bones, as the case may be). Just ask Noodle The Pug what kind of day it is.

Today is obviously a bones day.

…Or they could always try the microwave. That works too, apparently.

If microwaving isn’t their thing, they could just try leaving him out to thaw.

Or put him on rice. 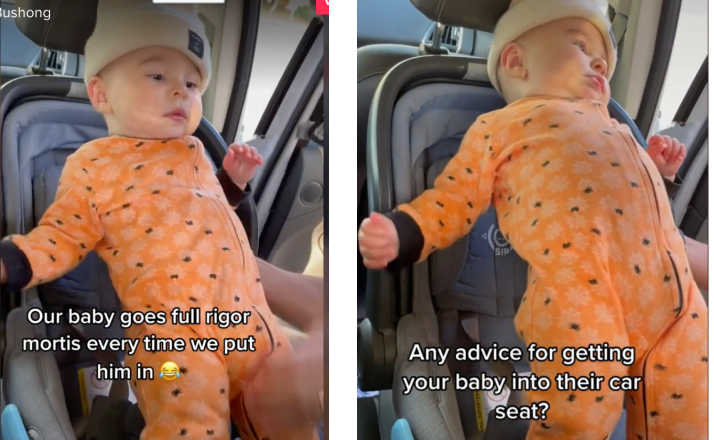 If all else fails, there’s always the old tried and true method: turn him off and back on again to reset.

Oh, and maybe check the batteries.

And if he still doesn’t work? It might just be time to call 1-800-got-bones and ask for a refund.

Providing he comes with a return policy that is.

And be certain to ask for the boneless variety this time.

And while they’re at it, bendable joints are a good idea too.

All jokes aside (mostly), many commenters do attempt to come to the rescue and offer some real advice.

The number one recommendation? The folding method. But you have to activate it first.

And when it comes to proper folding technique? It matters.

And the “tickle til they fold,” fold.

No mention of the taco fold though. Which, admittedly, is a bit surprising.

Others second the tickle method.

And if tickling doesn’t work? Just try chopping. Or bopping.

Or blowing. That works too.

While the majority of commenters are obviously joking, anyone who has ever had a baby that goes into a full-on swan song to avoid his car seat knows, the struggle is REAL.

As for which method Ben and Lex are partial to? That remains a mystery. But one thing’s for sure, when it comes to hilarious “advice” on how to make the car seat happen, TikTok definitely delivered.

What is Vabbing? One TikToker …