I’m in a hard season as a stay-at-home mom.

The thing is, there’s no one specific issue that’s making it particularly hard. There’s no looming physical illness, no pressing financial stress, no urgent marital crisis.

More often than not, by dinner time each day, I feel completely spent. Not just tired — but completely exhausted. Wiped. Tapped out. Like I can’t take one more minute of this stay-at-home-motherhood gig.

When I try to explain to my husband why I feel this way, I feel a little ridiculous.

“The toddler peed on the couch.”

I mean really, is that so bad? A little pee on an old, crappy, discount couch?

But that one-liner doesn’t really tell the whole story.

It’s that the pee on the couch came after I had dropped everything and rushed said toddler to the bathroom six times in a row, at his insistence that he needed to, “GO POTTY!!!” It’s that all six of those potty-trips yielded nothing. 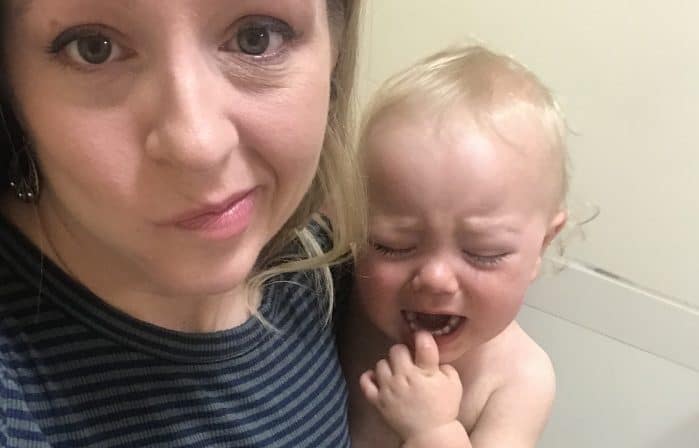 It’s that the pee isn’t on an easily cleanable cushion, but all over the base of the couch itself, because my kids, after being specifically told not to, had taken the cushions off the couch just a few minutes prior to said couch-peeing.

It’s that all of this took place right when we should’ve been leaving to pick up one of my other kids from school, so I had to race like Cruella De Vil to make it on time, with my car full of half-dressed, pee-and-milk-soaked children.

It’s that all of this caused me to lose my temper a lot when my kids only deserved it a little.

It’s that, out of a twelve-hour-day here at home, all of these events took less than fifteen minutes to transpire, leaving countless hours remaining for new, mind-numbingly frustrating shenanigans to evolve.

Finally, it’s that all of this takes place on an empty tank — when I’ve already fed everyone, clothed everyone, refereed umpteen fights between everyone.  I’ve already divvied up chores, packed school bags, and signed school folders. Plus, I’m already too-many-years-deep into a sleep-deprived existence.

I’m sure one day, I’ll be able to look back and chuckle at the sheer ridiculousness of it all.

One day, I’ll be nostalgic for these insane days with my kids, when I was their whole world.

But today? Today, being their whole world feels a little bit like death by 1,000 papercuts. No one little thing is too much, but all of it combined feels like it might finally do me in.

I know there are people out there with real problems –people walking through incredibly difficult seasons with impossible choices. That’s not lost on me.

And yet, here I am, barely keeping my head above water.

And sometimes that’s true. We’ll have a good day, or even several in a row. I’ll think, “Yes, I’m finally getting the hang of this! We’re all going to make it.”

But then we have another couch-peeing-day and I’m back to fantasy-Googling full-time childcare options nearby.

I’m not sure when parenting gets easier, and maybe it never does, but I’m holding out hope that there are days coming, soon, that won’t feel as long.

I don’t know if I can take too many more days like this. Neither can our couch.

This article originally appeared on the author’s blog, The Wild, Wild West

Suicide Tips For Children And …

Frontier City, part of the Six Flags franchise, is under intense fire today as social media pummels it with questions … Read More