The morning started like most Saturday mornings do. The kids and I were snuggled up extremely cozy in bed, and my husband was sound asleep on the couch (willingly relocated until the kids will stay in their own room).

My phone started vibrating and I grabbed it, expecting to ignore a call from someone on the East Coast who forgot the time difference between there and Hawaii.

But it wasn’t a call, it was an emergency alert.

“BALLISTIC MISSILE THREAT INBOUND TO HAWAII. SEEK IMMEDIATE SHELTER. THIS IS NOT A DRILL.”

I stared at the message in disbelief for a minute, honestly trying to rationalize staying in bed.

After all, it really wouldn’t matter much where on this island we went; we would still be vaporized.

And what better way to die than with my blissfully unaware children cuddled up to me? But I decided I should probably go wake up my husband (who had emergency alerts disabled on his phone) and see if he knew anything.

My husband is the epitome of the anti-morning person, but when I read him that message, he was UP. He turned on the TV to see if the news was also reporting it, since the attack sirens hadn’t gone off. Then he started making phone calls to his co-workers in the communications squadron.

He suggested we shelter in the downstairs bathroom -the only windowless room in the house- until he could find something out. We carried the kids downstairs and I gave my son the iPad to distract him.

I held the baby and texted my family that I loved them, just in case. 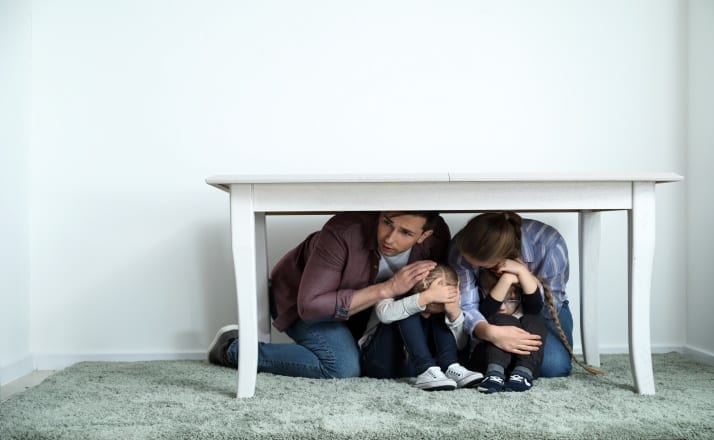 Then the sirens sounded.

I wasn’t quite sure what to do. I brushed my teeth. I grabbed a Slimfast shake (if we did survive, I would need to have eaten breakfast). I asked if we should go to the nuclear fallout shelter down the street, but my husband reminded me that it would not shield us from a blast.

I peeked out the window and saw some neighbors hurriedly piling into their car and driving off, presumably to that same shelter.

I nervously paced around, grabbing toys and a clean diaper for the baby and considering whether I should bring some provisions into the bathroom with us.

And I wondered whether it would even matter.

After a few more phone calls around base, my husband assured me it was a false alarm; I then informed my family. The “all clear” sounded a while after that, and the rest of the day’s news coverage focused on how a massive mistake like this could have happened.

The adrenaline started to wear off after some time, and I realized how frightening it had actually been to be faced with the threat of an impending fiery death; there was nothing I could do to keep myself & my family safe.

I am reminded of the scene in the movie Titanic when the woman is calmly reading a bedtime story to her two children as their room floods with freezing water. When there’s nothing you can do to avoid the inevitable, you just hold your loved ones close and try to enjoy your last few minutes on earth.

When those loved ones are children, you try to keep them calm.

This morning was, to me, an ugly reminder of the climate we are living in. Two very powerful yet unstable world leaders have had their guns pointed at each other, and are just waiting for an excuse to fire.

With my children huddled in a windowless basement, and the fear of imminent vaporization, I came to the somber realization that the rest of us—the citizens without extreme wealth and power—are collateral damage to these men.

And it hurts my heart to admit that.

I don’t know what other lesson there is to take from a moment like the one I experienced today. Maybe I am still processing it. But I do know this: even though it may sound cliche, we really are never promised tomorrow.

Partner Spending Too Much Time In T…

One of life’s greatest mysteries is not how the pyramids were built or what happens when we die. Oh no … Read More