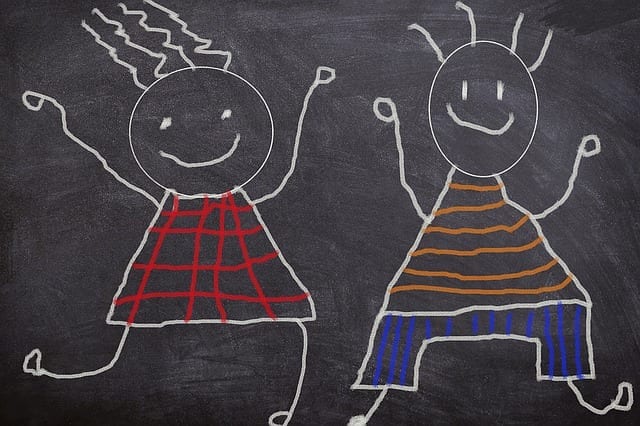 When I was in school, dress codes were always a big topic. At the beginning of the school year, the school would make a big deal about how the dress code was going to be fully enforced, no exceptions. And always within two weeks students were wearing whatever they wanted again, because teachers weren’t sure how to enforce the rules. Often uniforms would be a threat the school would throw out to scare students into following the dress code, but it never worked. I was always a lone soul wishing that the school would follow through with their threat – I wanted school uniforms.

Ever since the first time I saw a school uniform, I wanted to have one. Of course, as a young child my reasons were as silly as I thought they looked cool, but as I got into junior high and high school, I realized there were a lot real benefits to having school uniforms. Unfortunately, my schools never required them.

While very common in many parts of the world, school uniforms in the United States are not seen much outside of private schools. There are a lot of arguments against school uniforms, all of which can, well, be argued against. Uniforms are a fantastic choice that address a number of problems.

They are cost efficient

One common argument against school uniforms is that they are too expensive. If you are to look at the prices of an average private school uniform, then yes, that is true. But, if uniforms were to be implemented into public schools, the extravagant and detailed uniforms that are unanimous with private schools would not be the ones used in public schools. There are basic uniforms that are already used in a handful of public schools across the United States. These uniforms consist of solid color skirts and pants that are typically khaki, navy, or black, and then solid color polos in the color of the school’s choice. These uniform pieces can be found for reasonable prices at several retailers, and even websites dedicated to selling affordable school uniforms.

When you compare the price of a set of school uniforms with the cost of providing a whole wardrobe, it’s really a no brainer. Using french toast uniforms as an example, bottoms such as skirts and pants average $12 to $17. Polo tops average $10 to $15. Assuming at minimum you need two bottoms and 3 tops, you are looking at less than $100 for an entire school year, much less than you would pay getting several unique outfits.

They are easy to enforce

One problem with dress codes is they are often not clear, and are subject to bias and personal interpretation. Is that skirt really too short? What’s the difference between a tank top and spaghetti strap? Is the wording on that shirt offensive? Are pants hanging too low? With uniforms, it’s actually easier to enforce dress code rules because the rules are clear – colors, lengths, and clothing types are all subject to the same rules for everyone.

One of the greatest attributes of uniforms is their ability to equalize students. Often in public schools, cliques and bullying occur based on things as trivial as clothing brands and styles. If your family can’t afford these bands or styles, then you are seen as inferior. But, if everyone is wearing the same clothes, then this isn’t an issue. Everyone is wearing the same clothes, so everyone is on an even playing field. Of course, this won’t eliminate bullying all together, but getting rid of such a trivial reason to bully is a step in the right direction. Uniforms can even evoke a sense of belonging and kinship among students.

Despite the opposition, school uniforms have so many positive points. They are cost efficient for families, they make dress codes easy to enforce, and they are equalizers. With so many benefits, many public schools would be wise to switch to uniforms for their students. While a difficult change to make at first, it’s a change for the better. I know I would have benefited from uniforms in school, as my family couldn’t afford a lot of clothes, let alone the latest styles. I’m sure many students in similar situations would benefit as well.

Bio: Mila Sanchez is a writer with a BA in English Linguistics living in beautiful Boise, ID. Her ambitions include traveling the world, studying languages, and taking pictures of her dog, Baymax. Connect with her on twitter and instagram!