Today was not a good day for parenting in my world. In fact, it was downright awful and I’m kind of feeling like crap about it.

It was the kind of day where the universe says, “Psst. I bet you can’t undo years of reading about and practicing positive parenting all in one afternoon.” And I was like, “Hey universe. Hold my beer.”

A lot of factors led up to how this day played out.

We had just returned from a big FAMILY VACATION. It was incredible, but filled with completely new experiences like airports and customs and the actual flights. Not to mention a resort with totally different food, no routines and late bedtimes with super early mornings.

Some children handle a break from routine exceptionally well. My children are not those children. Lack of routine and unfamiliar surroundings are difficult things for them to process and we are still in the thick of trying to transition back to “regular” life at home. Our oldest is working extra shifts at the stable where she rides and also riding more, which requires a lot more driving. I feel like I am locked in a never ending battle with the thirteen year old over the Xbox and the all mighty FORTNITE.

The littlest ones are sick of being dragged around in the van to drive the sixteen year old where she needs to go and this has led to nonstop whining and complaining from them.
I’m also still working part time, and trying to write.

And of course there are mountains of laundry, dishes that need doing, groceries that disappear within seconds of bringing them in the door, and everything else that accompanies running a household.

With the constant planning and scheduling and coming and going and rushing and nagging, I may be here, but I’m not really present. My body is in front of them but my mind is already several steps ahead in our day and busily ticking off the boxes on my to do list.

Last night I stayed up far too late. Our youngest actually slept for a couple of hours straight with minimal waking so I worked like crazy to finish things I’ve been trying to complete for ages.

This of course meant that the six year old decided to wake up before dawn today and within minutes the fighting and whining and bickering was in full swing.

And our day began, with the driving and dragging and pushing and prodding and finally it all came to a head. 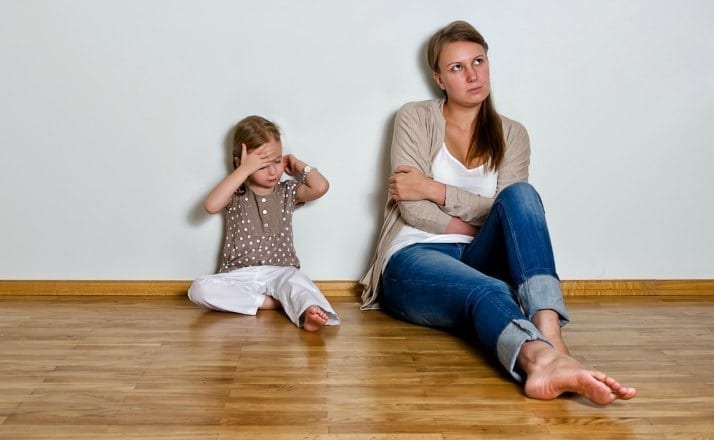 It was our four year old wild child who bore the brunt of it. She had been especially difficult all day. She just seemed to wake up looking for a fight. She had spent the morning screaming the kind of bloodcurdling screams reserved for banshees in horror films anytime something didn’t go her way.

She was testing every limit and pushing every boundary.

We were driving in the van when I refused to do something she demanded. I wanted her to ask nicely and she disagreed. I put my foot down and so did she. Actually, she didn’t put her foot down so much as she took off her shoe and threw it at me while I was driving.

And that was that. The final straw. I completely, utterly and totally lost my crap. I YELLED louder than I am pretty sure I have ever yelled. While driving through our neighbourhood…….with all the windows down.

I ranted and raged and made accusations. I put those horror movie banshees to shame with my performance. It was ugly.

By the time I calmed down, which took a little while, I apologized to her for losing my temper and we talked about it of course, but it doesn’t take it back. Was she being difficult? Of course. But she had legitimate reasons for being so difficult and none of them had anything to do with the fact that I wanted her to ask nicely for something. Her world has changed completely in the past couple of weeks, and I hadn’t given that a moment of thought.

When I told my husband about the days events he was understanding of course. But he also said something that provided some needed perspective:

“I know the days are hard right now. I know they feel nearly impossible. But soon they will all be in school and the house is going to be so quiet. And you are going to miss them. So try to hang in there.”

And he’s right. I WILL MISS THEM. A lot.

So I decided to be present. I refused to spend the evening periodically checking emails and obsessively reviewing the calendar. I gave myself permission to leave messes and ignore sticky floors. I joined the kids in second helpings of ice cream for dessert.

I even agreed to read the super long story book at bedtime. I was with them. Body and mind. And what a difference it made. No whining. No complaining. No banshees.

I certainly don’t expect to magically find myself avoiding the WHINING AND FIGHTING and general craziness that accompanies having kids. However, I can control how and what I contribute to that craziness.

For now I am watching the wild child as she sleeps, trying to forgive myself for today, and so incredibly grateful that I have the opportunity to do better tomorrow.

This post originally appeared on Is That Chocolate Or Poop?

There are good people in the world, and then there are GOOD PEOPLE. Ones who can only be described as … Read More