I don’t know about you, but my newsfeed is saturated with news coverage of the unprovoked Russian invasion of Ukraine.

And while I am rooting for all the underdogs in this vicious fight it’s the stories about kids and pets that are making me lose it and cry.

One young, Ukranian girl has captured hearts and moved people to tears in the most heartbreaking way.

On March 3rd, Marta Smekhova posted a heartbreaking yet still inspiring video of a young girl named Amelia singing her heart out while hiding in a bomb shelter with her family.

In less than a week, it has attracted more than 96K reactions and has been shared 117K times. The comments are in languages from all over the world.

According to the post, which was initially composed in Ukrainian by Smekhova, a person who filmed the girl as a passerby, possibly also in the shelter to hide from the shelling and bombings outside in the city of Kyiv.

While there is some information lost in translation, the message is clear – this is heartbreaking for the children. The post begins:

“Seeing in one of the Kyiv bomb storage, how children draw bright pictures in half-darkness. I, of course, couldn’t silently pass by.
I stopped, praised, offered to do a little exhibition to somehow decorate this not so happy place,”

Smekhova explains how she met the young girl named Amelia and chatted with her about the drawings she and other children were working on to pass the time.

Amelia told Smekhova that she wants to be a famous singer when she grows up, and so Smekhova encouraged her to sing a song right there, on the spot.

According to the post, Amelia was worried that no one could hear her because the sounds outside were too loud, but Smekhova kindly encouraged her to try anyway.

For context, the shelter appears to be a basement of some kind and is full of people. There are piles of clothes everywhere. 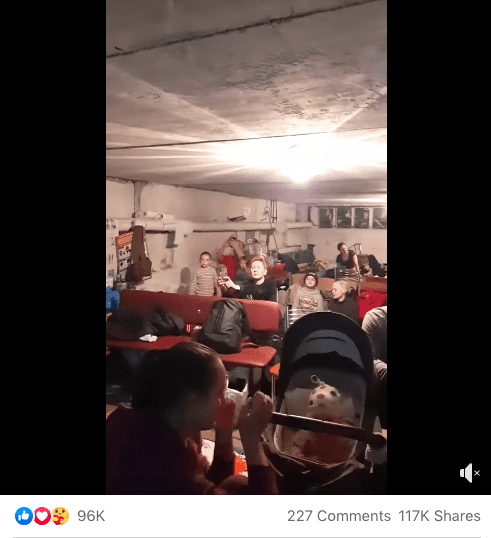 From the first note this child belted out, the entire shelter stopped what they were doing and watched her bloom into the empowering message behind ‘Let It Go’ from Disney’s Frozen.

As the camera pans around the shelter, we can men and women wiping away tears and totally riveted by this child’s beautiful singing.

One Facebook user from Poland wrote, “Amelia, you are a super star here in Poland!”

“Amelia, you are the brightest star in these days. I wish you lots of courage, peace will come. Hugs for all you in the shelter there from Finland. The whole world is on your side, with you. Stay strong, stay safe.”

Linda Forrester wrote, “An amazing child, her sweet singing. Putin, this is who you’re hurting; children.”

Amelia’s singing caught the heart of the internet and made its way to Idina Menzel, who took to Twitter to let Amelia know she’s seen and heard.

In the tweet, Menzel writes, “We see you. We really, really see you.”

Smekhova wrote, “I showed this video to people in different cities of Ukraine; it was seen by foreigners in different parts of the world! Amelia, your singing left no one indifferent!”

Smekhova ends her post with an angry middle finger to the Russian military, writing, “Look, Russians, against whom you are fighting! Only a coward can fight against civilians, take away childhood from defenseless children!”

As we all watch the war unfold and countless stories make their way to our phones and gadgets, please remember that there are millions of kids for whom life will never be the same.

Hug your babies tonight, maybe even watch Frozen and send up a prayer for all those families hiding from bombs and looking for peace and safety.

We see you, Amelia.

Doctors Warn Women Not To Use …


Kids Use Ring Doorbell to Talk to D…

It’s Girl Scout cookie season, which for some is truly the most wonderful time of the year. It’s your one … Read More