When you look down at your baby and see that sweet, gummy little smile, you may find yourself wondering: When do baby teeth come in?

The answer is, “It depends.”

But that’s not really what any parent wants to hear. When you have a question about teething, what you want is a clear-cut answer!

So here are the answers to some of the most common questions about babies and teething.

When do babies get their first tooth?

Most of the time, when parents ask when baby teeth come in, they’re primarily wondering about that first tooth. All teeth are exciting, but the first one is a developmental milestone worthy of the baby book!

If your baby doesn’t have any teeth, and they go through a fussy phase, you may find yourself wondering if teething is to blame.

On average, the first baby teeth come in around six months of age. What that really means is that some babies get their first teeth as early as four months and some get them much, much later.

(Some babies are even born with teeth, though of course, this is pretty unusual.)

The NHS has a great breakdown for when to expect each individual tooth, on average. (This is a UK-based health site, but the teething process is universal.) 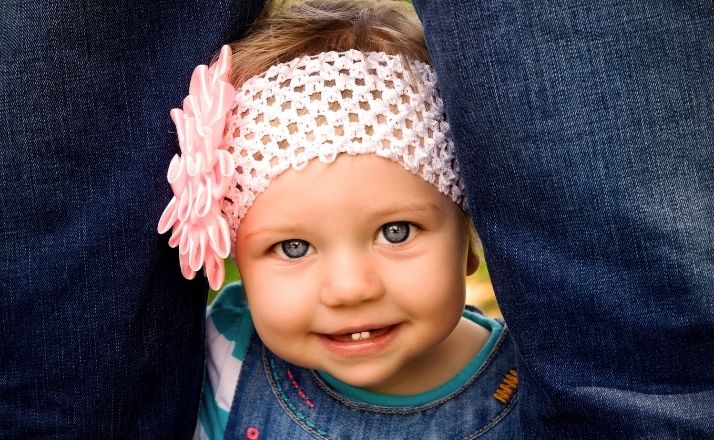 If you’re more of a visual person, you may want a baby tooth chart to help you visualize what baby teeth are coming and when.

Orajel has a great baby tooth chart for this. It’s easy to read and includes the typical dates for when each baby tooth makes its appearance.

Of course, their goal is probably to sell you their product. This isn’t medical advice, but just know that medical experts now advise against using Baby Orajel for teething. You can read what the FDA has to say about that here.

How frequently do new baby teeth come in?

This is another aspect of the teething process that varies widely. Some babies will get several teeth all at once. Other babies get their teeth one at a time in a relatively spaced-out manner.

Regardless of how many teeth your baby gets at once, they will typically come in the same order. Usually, babies get the bottom two middle teeth (or central incisors), followed by the top two middle teeth.

After that, the pattern does become more varied, but it’s still pretty typical for babies to get the teeth that come beside those other sets next (the lateral incisors).

Statistically speaking, the first molars are most likely to come next. In reality though, it can be a bit of a toss-up between the canines (also called cuspids) and the first molars. Then come the second molars and HOORAY! You’re done!

(There’s still the third molars/wisdom teeth, but those will come in many years later.)

Rest assured: Your baby WILL get teeth. And teething WILL end.

Over the course of four kids, I can’t count the number of times I’ve Googled, “Is my baby teething?”

“Could my baby be teething already?”

“Will this teething hell ever end?”

The good news is that whether your baby’s teeth come in early or late, whether teething has been relatively simple or a little slice of hell, the end game is the same. Barring any crazy, unforeseen dental complications, all 20 of those teeth will come in.