You waited nine long months to meet your baby and then . . . well, they don’t do a whole lot. They eat, sleep, and cry, but that’s pretty much it for the first few weeks. But then one day, you put your baby down on their belly, walk away, and you return to them lying on their back. Baby has learned to roll over!

When do babies roll over?

As with all important developmental milestones, every baby is unique. However, rolling over generally occurs somewhere between two and four months.

At first, baby seems to roll over almost by accident. They lean a little too far to the left or right and gravity takes over. Over time, however, baby will begin rolling more regularly and it becomes clear that it’s deliberate. 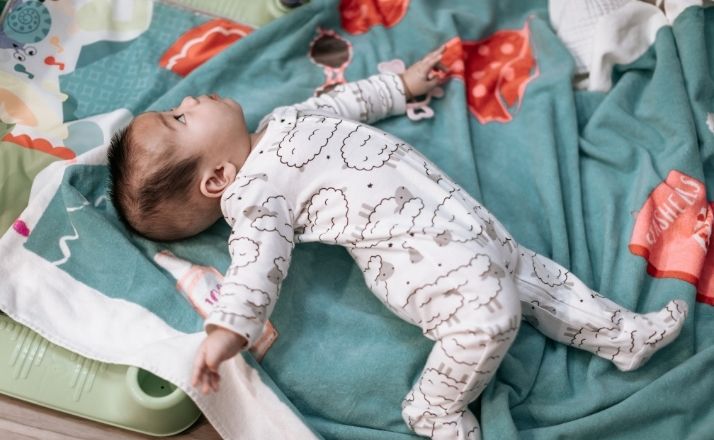 Which roll comes first – belly to back or back to belly?

Belly-to-back rolling can occur as early as three months, but the average age is around four months. (Full disclosure: every source I consulted, from the AAP to WebMD to What to Expect, all mention three months as the early end of the range, but I can promise that two of my babies were rolling like it was their paying job by the time they were two months old. My point: don’t fret too much about the “normal” range.)

On the other hand, it’s more challenging for baby to roll from their back to their belly. Think of it like a turtle flipped over on its shell. Rolling from this position requires more core strength and gross motor control from baby. Babies typically begin rolling from back to belly between four and six months of age.

Rolling over is an important milestone for several reasons. First, it’s a sign that baby’s muscular development and gross motor control is on track. A baby who doesn’t begin rolling over within the typical range will be watched more closely by their pediatrician to be sure all is well.

Second, the core control and muscular coordination rolling over requires is an important stepping stone to other motor skills, like sitting up unassisted, crawling, and later, standing and walking.

Third, babies can be surprisingly mobile once they learn to roll. Parents will need to supervise them much more carefully. While babies should really never be left unattended on an elevated surface, the risk is even higher once baby can roll over. Changing tables, couches, etc., all present a greater risk once baby can roll.

Many parents are also surprised to find that some babies use rolling as a way to travel, even on a flat surface like the floor. One of my sons would barrel-roll himself, over and over, until he reached a desired toy (or some other less baby-friendly item, like the dog bowl).

Once baby can roll over, parenting really does become a whole new ballgame!

Giving birth is, to put it lightly, a trippy experience. Not only are you physically bringing a new life into … Read More