Filter Free Parents
Home Health + Wellness Bed Rest Nearly Killed Me But Whether It Saved My Baby Is...

My obstetrician was mumbling something between my legs. I was four months pregnant and feeling unusual pressure in my lower belly. The plan was to get it checked out and then go for dinner with my husband.

Suddenly, the doctor lifted her head. Now I could understand some of the words coming out of her mouth, and when I heard them my world shifted.

My baby’s life was in danger.

As the doctor spoke, my eyes blurred and my head began to spin.

All I knew as I pulled on my maternity pants and tied my shoelaces was that my baby might not make it to term, and that I’d have to get a therapist for my lady parts.

The next day I went to a specialist for a second opinion. The prognosis: Go to bed. Stay there. Don’t move until the baby starts to crown.

That was it. All my doctor could offer as a possible remedy was an extended nap? Fancy degrees, advanced scientific technology — none of that mattered.

Once the waterfall of tears dried up, I tried to comprehend what this all meant. I had been naive to think we could fix any medical problem with a pill or procedure. Instead, I’d be spending five months flat on my back, waiting.

I’d have to quit my job. No more exercise. I’d be isolated in my house, away from friends and family. It began to sound more like a prison sentence than a medical directive.

I wondered how lying down would keep my baby from falling out. I couldn’t help but wonder if my doctor was prescribing bed rest because she had no other fixes. But I needed to know the truth.

I also wanted to know what other women with similar experiences had to say. So I started digging through the research with one pressing question:

This is what I uncovered: Maybe.

Super. After hours of Google searches, I came up short because, get this: There haven’t been enough studies done to decide either way! Wait! What?

Close to a million women a year are on bed rest and only a handful of scientists think it’s worth taking a look at the phenomenon?

If you really want to cheer yourself up, Google “stupid scientific studies” to see where we are focusing our resources instead. Sure, we now know definitively that most of our Facebook friends aren’t our real-life friends, and that Spiderman doesn’t exist, but bed rest? The jury’s still out.

What I did discover was that bed rest is prescribed on the assumption that otherwise normal activities, such as lifting, exercising, going to work, and having sex, can make an already fragile situation even riskier.

Basically, women are put on bed rest to stabilize their bodies.

A stable body sounded like a good thing. But not so fast. It turns out there are serious downsides to being prone for so long.

My heart and lungs wouldn’t work the same way as if I were going about my regular activities, and I’d be more susceptible to blood clots as arteries began to stiffen. I’d also lose muscle mass, which would make post-natal recovery much more difficult if I was lucky enough to cross the finish line.

As I continued to read, I learned that many women suffer severe psychological effects from checking out of life for so many months. Staring at the same four walls for weeks on end can be a slippery slope to the dark side.

All this conflicting information put me into a tailspin.

There just didn’t seem to be enough research to support or refute the idea of lying down for months.

I took a few deep breaths as my anxiety began to skyrocket. The guarantees I desperately sought just weren’t there. And yet bed rest seemed to be standard protocol for even minor pregnancy glitches.

As I sat in front of my computer, my mind drifted through various worst-case scenarios. In that moment, I knew that even if bed rest couldn’t guarantee a full-term pregnancy, and even if it had harmful effects on me, I would do anything in my power to keep my baby alive.

The moment I had found out I was pregnant I made a commitment to dedicate my life to this child. That wasn’t about to change now that we had entered rocky territory.

I shut my laptop, walked over to my bed, and pulled back the sheets.

I stayed there for five brutal months. 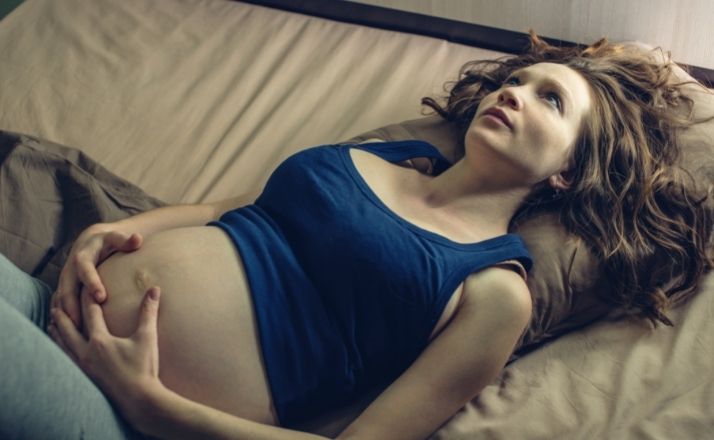 My career came to a halt, prenatal depression hit me hard, relationships with friends and family suffered, and my marriage almost fell apart. By the time those five months were up, I had been in bed so long that I could barely walk, even to the bathroom.

But those cruel, anxious days passed, and my baby boy arrived — healthy and on his due date, which happened to fall on Rosh Hashanah. It was indeed a sweet new beginning.

I have no way of knowing if bed rest made the difference. I don’t even know if I would make the same choice the next time around. What I do know is that I did my research, I didn’t take anyone’s word for it, and I played an active role in the decision to bed rest.

When it came down to it, only I could decide what was right for me and my baby. And that kind of truth . . . that can never be found on Google.

This essay originally appeared on Kveller.com and is reprinted here with permission.

Aileen Weintraub is the author of Knocked Down: A High-Risk Memoir, a laugh-out-loud story about marriage, motherhood, and the risks we take. She has written for The Washington Post, Glamour, AARP, NBC among others. Visit her at www.aileenweintraub.com and find her on Twitter @aileenweintraub

Giving birth is, to put it lightly, a trippy experience. Not only are you physically bringing a new life into … Read More