Filter Free Parents
Home Health + Wellness What Is A lotus birth? Is It Safe?

Once the placenta is delivered, the placenta remains attached until it separates from the baby naturally. This can take anywhere from a few days to more than a week.

Is a lotus birth safe?

Please remember: this isn’t medical advice. If you have questions about the health or safety of your pregnancy or birth plans, please talk to your medical provider.

Honestly, there’s very little research supporting the safety of lotus births. None of the major health organizations or associations currently recommend it. In fact, most doctors and hospitals prohibit lotus births by policy, with some allowing exceptions for religious reasons.

If you want to have a lotus birth, your birth plan most likely includes giving birth at home.

Worldwide, there are some records of lotus births dating back centuries. In fact, lotus birth is so-called because the placenta and cord resemble the lotus flower, which holds cultural significance in East and Southeast Asia. Many of these cultures associate the lotus flower with purity, elegance, fertility, and birth, among other things.

However, according to Dr. Sarah Buckley, author of Gentle Birth, Gentle Mothering, the concept wasn’t really popularized in the United States until the 1970s. Even then, using the term “popular” is a misnomer. Lotus births are still exceedingly rare in the United States (and really, in the world at large). 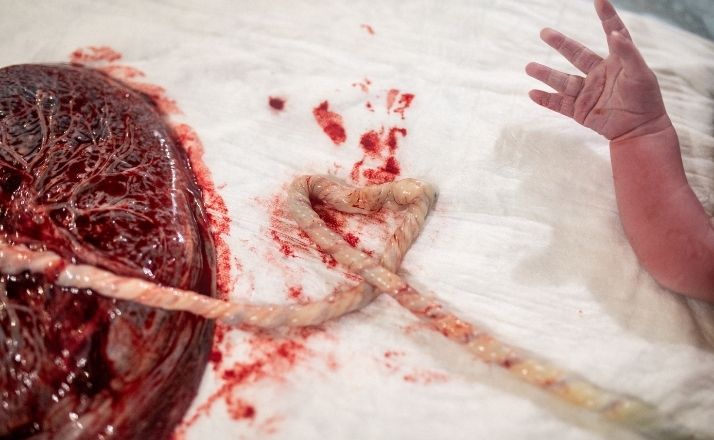 The biggest risk of a lotus birth is infection.

Once the placenta has detached from the mother, it is no longer a functioning organ. You’ll essentially be toting around dead tissue, attached to your newborn. It’s not difficult to see how infection could result.

In the UK, where lotus births were becoming more common (though again, among only a very minute portion of the population), the Royal College of Obstetricians and Gynecologists spoke out against the practice. They said,

“The placenta is particularly prone to infection as it contains blood. Within a short time after birth, once the umbilical cord has stopped pulsating, the placenta has no circulation and is essentially dead tissue.”

Why do some women choose a lotus birth?

Knowing all these risks, why do some women still choose a lotus birth?

Well, I had four non-lotus births, so I obviously can’t speak from experience here. Still, a few reasons women have cited for choosing a lotus birth are:

Is a lotus birth different than delayed cord clamping?

Yes — these two things are not the same. In delayed cord clamping, the baby is delivered and the cord is left attached temporarily. After a period of time, between 30 seconds and several minutes, the provider clamps and cuts the cord. (Most hospitals now cut it after about one minute).

If you’re looking for a safer alternative that still honors the mother-child connection and the importance of the placenta, I suggest looking into further-delayed cord clamping.

Every woman gets to decide what’s best for her and her baby. Still, if you’re considering a lotus birth, I strongly encourage you to speak to your medical provider early and often. Preparing for such a birth comes with significant risks to your baby and it’s essential you consider them.

Car seat safety is obviously a critical issue for parents, but sometimes we overlook that booster seats require the same … Read More