Christian singer, Matthew West, released his latest single, “Modest Is Hottest,” and it is sparking a social media firestorm fueled by upset people everywhere. In fact, the song has already been deleted from his YouTube channel.

With lyrics such as…

“The boys are coming around cause you’re beautiful and it’s all your mother’s fault.”

“Modest is hottest, the latest fashion trend is a little more Amish, a little less Kardashian.

What the boys really love is a turtleneck and a sensible pair of slacks, Honey Modest is Hottest”

…the message it sends is viewed by some as both dangerous and problematic. Not to mention, completely tone-deaf. Hello 2021, ’90s purity culture, is calling.

The song is, in West’s words, a song “for all of the fathers out there whose daughters are joining TikTok and starting to date. The struggle is real.” 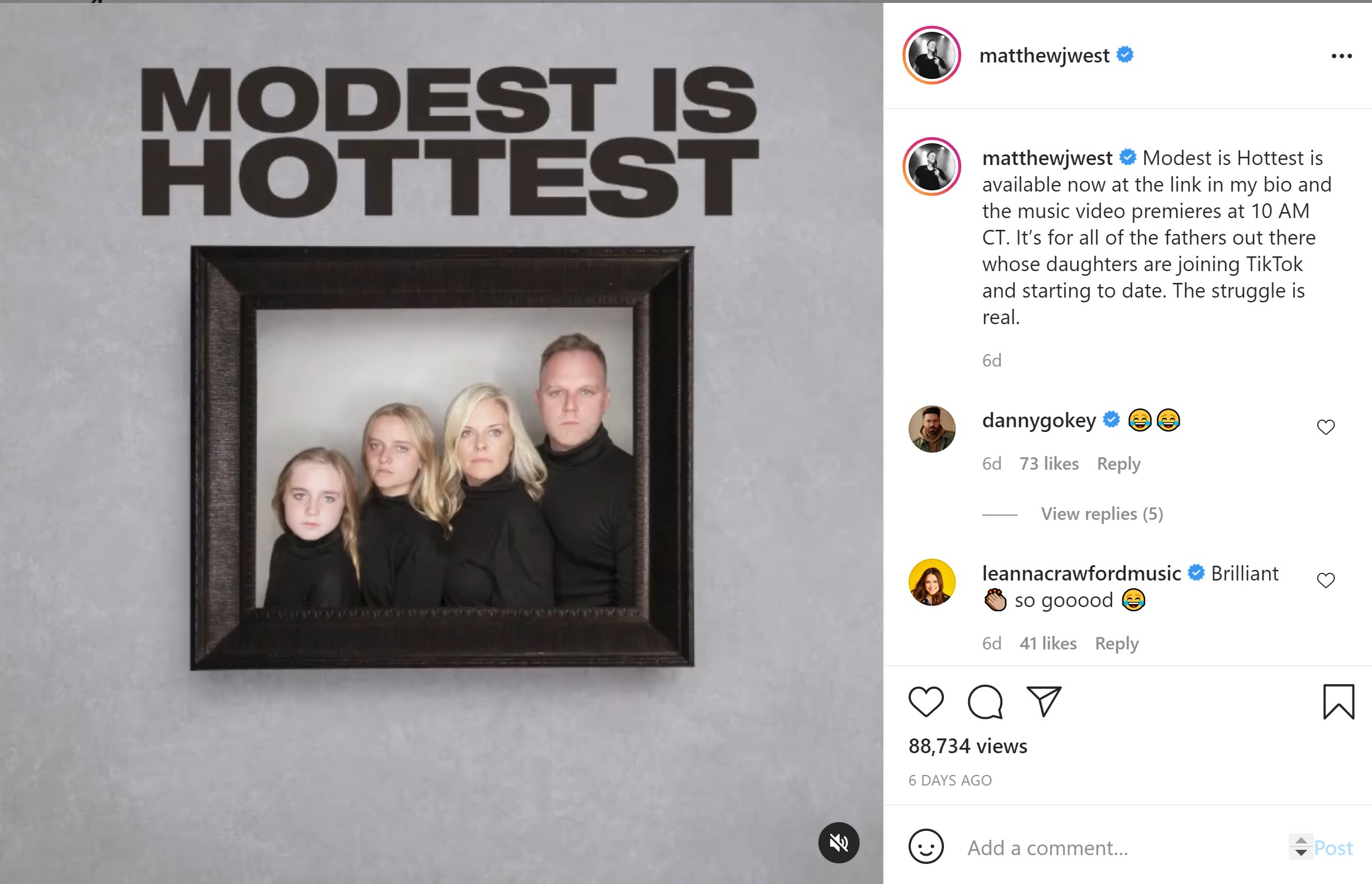 The song is written as a letter to his two daughters (who are featured in the now-deleted video) in which he attempts to educate them on what type of clothing boys “really love.”

Because let’s face it, what a girl wears has EVERYTHING to do with attracting (or not attracting) boys (and I could really use a sarcasm font right now.) 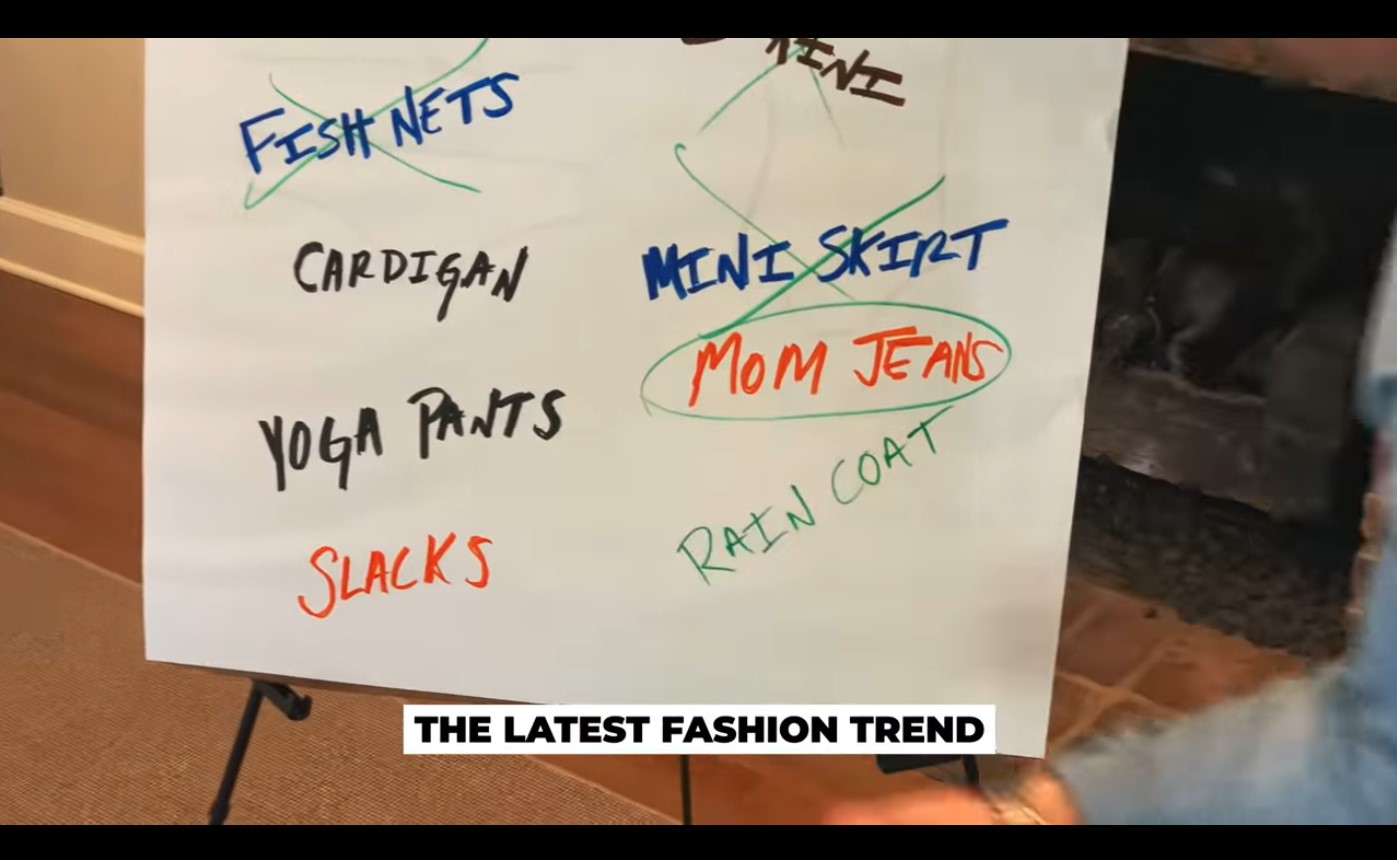 West goes on to sing:

If I catch you doing dances on the TikTok, in a crop top, so help me God, you’ll be grounded til the world stops. I’m just kidding. No I’m not.

Later in the song, he sings:

What the boys really love is a one-piece with a raincoat over that. Honey, Modest is hottest, sincerely, your Dad.

The song sends a strong message that girls are inherently responsible for the choices boys make when it comes to controlling their desires because boys are clearly incapable of doing so.

Although, not according to West. It’s meant to be a parody.

For those of you unfamiliar with Matthew West, he is known for his satirical songs and humorous take on life.

According to West’s description on Instagram, Modest is Hottest is a “light-hearted take on an age-old struggle.” The struggle being a dad raising daughters.

He further explains that the song is his “ridiculously silly way of reminding them that their appearance doesn’t define them.”

The Modest is Hottest music video is out now! This song is a light-hearted take on an age-old struggle.

As a dad raising daughters, this song is my ridiculously silly way of reminding them that their appearance doesn’t define them.

While the world might focus on the outward appearance, the Lord looks at the heart. Regardless, they are beautiful inside and out! (Even in turtlenecks).

While this was his intent, it’s obvious that something got lost in translation.

Because many people didn’t get the “joke” and came out in droves against it.

I get this is mostly a joke. But “Your appearance doesn’t define you.” And “modest is hottest” don’t really mix. At all.

You know what actually (is) hot? Respect and Consent. Let’s teach that first, then we won’t have to teach girls that it’s their fault because they dressed a certain way.

The good folks of Twitter also got into the fray, letting their outrage known as they took to the comment section of West’s original Tweet (which has since been deleted).

As a dad raising daughters, this song is ridiculously objectifying and harmful, telling your daughters it is their responsibility to 'cover up' so as not to "tempt" boys. It reinforces the lie women are responsible for male actions. It's purity culture 101 and it's gross.

This isn’t it, bro. This isn’t funny or silly. It’s demeaning to your daughters, sexualizing them, and teaching them that THEY are responsible for boy’s thoughts and actions. How about teaching boys to treat girls with respect no matter what they wear?

If this was the message you were trying to convey, you wildly missed the mark. If their appearance doesn’t define them, then what they wear doesn’t define them whether they choose to wear turtlenecks or miniskirts. It’s their choice. They aren’t responsible for men’s thought.

Others came to West’s defense.

Everyone needs to lighten up the song is made in jest. If it weren't so they wouldn't all be wearing turtlenecks. He made a song about Thanksgiving dressed like a turkey. This guy is the Adam Sandler of CCM.

Wow! People taking things waaaay too seriously! We need to remind our girls that they don't need to show off all their assets! And while they are not responsible for what others think, they do need to follow what the Bible teaches- which is modesty! I'm with you @matthew_west!

As the mother of a teenage daughter, I understand wanting to protect her.

I get that West is struggling with his girls growing up and beginning to date and he’s using humor to deal with it. I have absolutely nothing against turtlenecks and slacks and if my daughter wants to wear them, go ahead.

I understand that this is tongue-in-cheek.

However, it also made me think about the messaging I DON’T want her subjected to.

The messages I do want her to hear?

Pastor Jeremy Coleman, who also happens to be a girl dad, took it upon himself to rewrite West’s song with the lyrics parents really want their daughters to hear.

Well if I catch you doing dances on the TikTok, wear what you want. Girl just go off! Hold your head up so your crown doesn’t fall off. You’re a queen if you forgot…

If the boys act like pigs, tell ’em gouge out their eyes, cause I’ve got some shovels and some alibis. So just wear what you want and I’ll love you till I die.”

There’s no word on if or when West plans to release a Dear Sons version of Modest is Hottest, but amidst the backlash, he issued an apology on Instagram after deleting the song on all his social channels. He said: 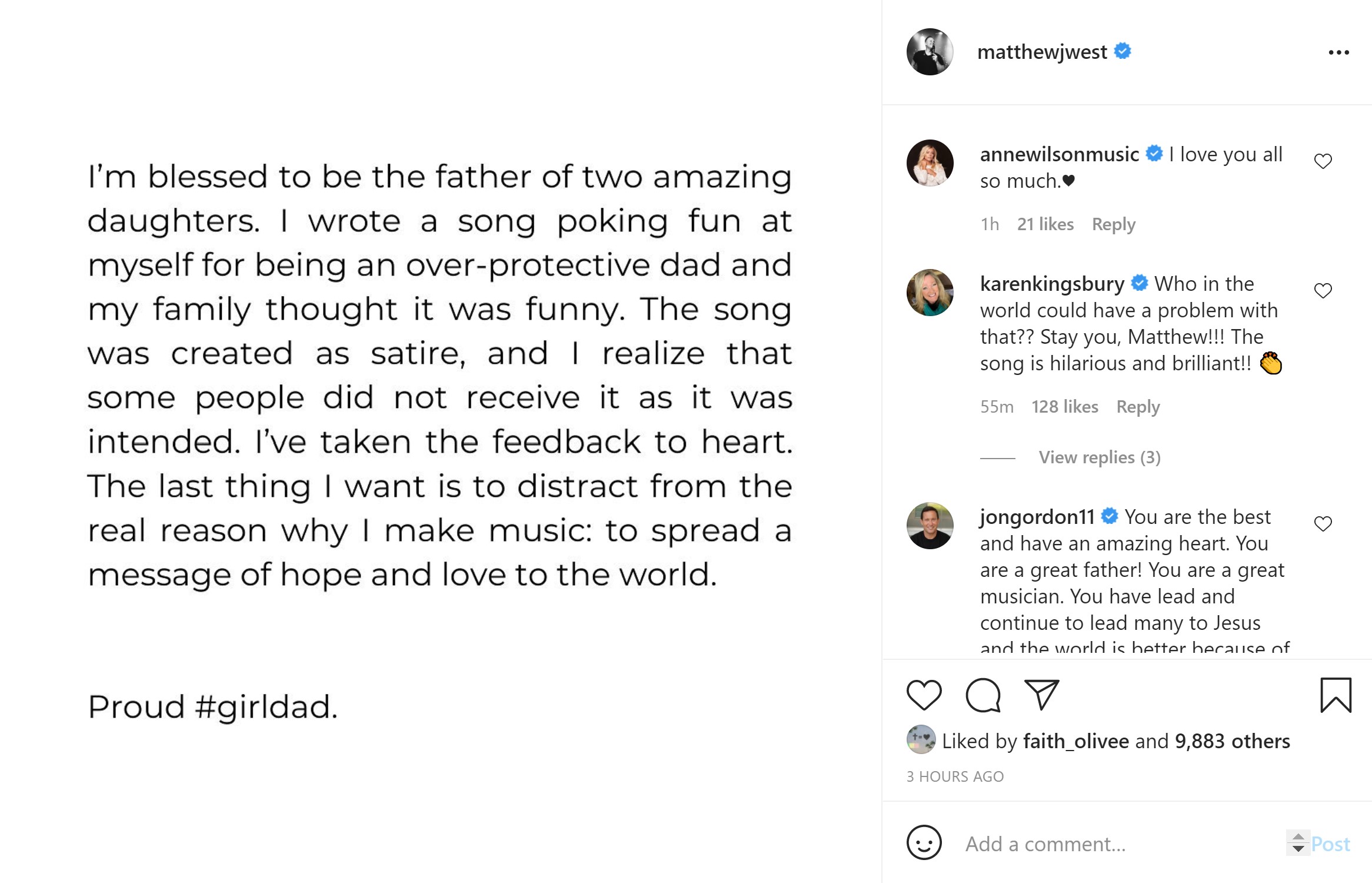 While the video has been deleted from all of West’s official social media channels you can hear the full song here.

Dear Children: Your Mom Is A Real Human Being

A Live CoComelon Tour Is Happening. Parents Realize There is No Escape. This Is Your Life Now.