Parenting is a never-ending Merry-Go-Round of challenges. I knew that there were going to be parts of parenting that would bring me to my knees. I wasn’t prepared that one of these things would be 6th grade math.

Because somewhere between the ’80s and today, 6th grade math has gotten decidedly more complicated. And my middle-aged Gen-X brain? May very well explode trying to figure it out.

There is common core math, Singapore math, decomposing math (and it’s all I can do not to make a Walking Dead joke right now), and discovery math, just to name a few. What I have discovered? Is I now suck at math. 6th grade math to be exact.

I used to be good at math. Honest. I took advanced math all through high school. I even did a couple of courses in university. Because I liked it. I excelled at memorizing math facts and formulas. I used to know how to do math. Now? Now I know nothing. 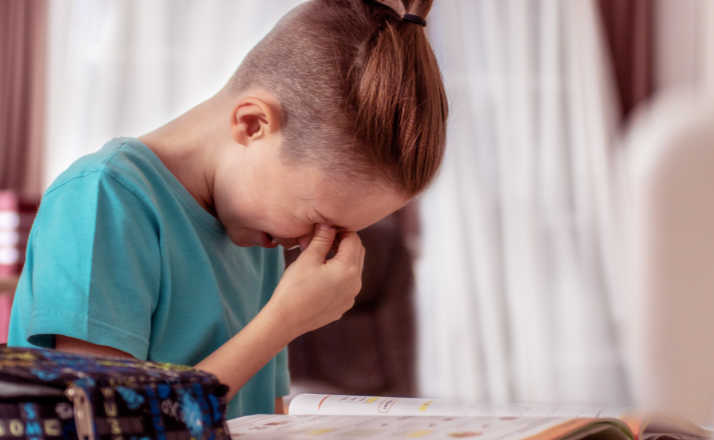 The math our children are learning is less about the numbers and more about the logic behind the numbers. It’s being able to explain why you got the answer you did instead of just knowing that 2+2 = 4. Which sounds suspiciously like science and inquiry based learning. Which is a nice way of saying it’s become really complicated.

Math now requires students to learn multiple ways to solve the same problem, relying on strategic reasoning over learning just one standard method. The idea behind it? They will become better problem solvers in the long run.

Remember the good ol’ days when there was just one way to multiply multi-digit numbers? Now? Now there are 4. At least. Probably more. The traditional method of multiplying and carrying the one has been bastardized and mutated into arrays and boxes and lattices and partial products. May the math gods help us all.

And help my daughter with her 6th grade math please. Because clearly? I cannot.

I try. Really I do. But it’s hard enough reaching into the deep recesses of my mind where I have filed away all of the things I thought I would never use again in my life. Things like solving math equations, for one. Which, obviously, was a mistake. Because apparently, there is no escape from math.

Never mind that on top of having to relive the whole BEDMAS episode I now have to teach my poor old 40-something brain “new” math. And this does not make me, or my brain, happy.

And while I would love to just stick to the normal math methods of yesteryears and say common core be damned, this doesn’t help my daughter when she’s struggling with these abominations formerly known as math. So I sit with her, blood pressure rising, calmly attempting to explain the concept of carrying, only to be met with “I have no idea what you’re talking about.”

At which point my sanity begins to completely unravel and there is no longer calm. There is only confusion, and rage, and stabbiness.

So I do what millions of other similarly afflicted parents are doing right now. I Google and curse and wonder how math has gone so horribly wrong and how I’ve ended up here, listening to my daughter sigh heavily as she exclaims, “But that’s not how my teacher does it!”

It’s possible that 6th grade math is the worst.

And I’m not the only parent struggling to grasp number lines, ten-frames, graphs and diagrams. There are countless Millennials and Gen-Xers who have taken to social media to voice their frustration with their children’s math homework.

Perhaps the most famous was this Facebook post by Doug Herrmann who was frustrated that he couldn’t help his son with his math homework. He decided to prove his point by writing a check to his son’s school using ten-frames.

While parents may not be loving their kids’ math, there is actually a valid reason behind all this mathematical madness.

In an interview with the Washington Post, Jo Boaler, professor of mathematics education at Stanford University said:

And more often than not, these seemingly complicated 6th grade math methods actually make a lot more sense to my daughter than the traditional methods I am desperately clinging to.

And who knows? It may actually help our kids figure out the mystery of paper products math. Where 8 rolls of toilet paper actually equal 36 rolls. And so do 9 rolls. Oh, and 12. Think 6th grade math is complicated? It’s just preparing our kids for solving problems in the real world. Problems like which toilet paper is the best deal.

So while I’m watching my daughter multiplying the WRONG way, adding zeros all willy-nilly and NOT carrying numbers, I just keep reminding myself, this is why I became a writer.