Filter Free Parents
Home Mom Life Humor I Got Waxed Today And I Guess This Is What Single People...

I got waxed today. Yes, if you are wondering details about that one –let me just say, yep it’s exactly what you think. Ouch. Ouch as in remember that movie where Steve Carell’s character gets waxed and he yells those Kelly Clarkson obscenities? Totally accurate.

This is apparently what the single people do these days.

Even single, widowed people like me. From what I understand, this is one of the many normal, routine things people do when they are ‘out there.’ I haven’t been ‘out there’ since 1998 and back then I was armed only with a cheap, pink razor, slim hips and dreamy, pre-breastfeeding boobs– and it all worked like a damn charm.

But time has changed things a bit. It’s a little sexier out there this time around.

They do selfies and sexting and sit at certain bars to go home with people after catching a ‘vibe.’ They join Tinder and Bumble and other dating sites that sound Disney-like yet are so dirty you have to shower after just opening your web browser. 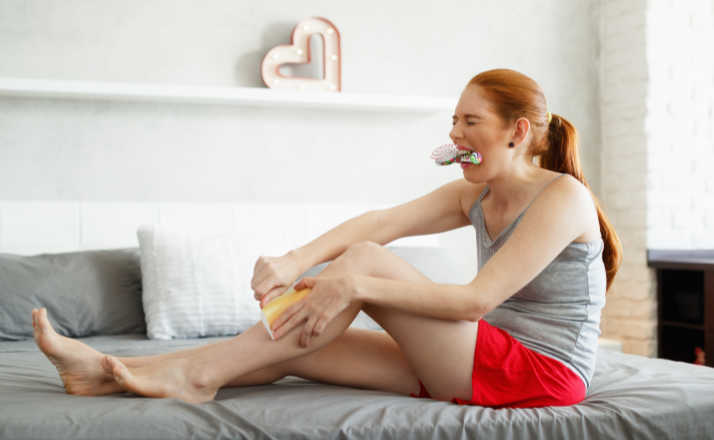 They flirt at the gym, too.

And I’m completely inept at the gym and only know how to use a treadmill, so I got no game there. The other day a guy approached me at the drinking fountain near the ab machines and started talking to me.

You would have thought I was trying to do my best Elmer Fudd impersonation for him, because I seriously didn’t know what to say let alone how to make coherent words come out of my mouth. Yep –he gone!

My daughters were watching me page through a dress catalog tonight. They were pointing at and picking out all these beautiful, fancy dresses for me. I told them how mommy would be a little overdressed for cafeteria duty or my work at the preschool in any of these outfits. I just don’t have anywhere to wear them, I said.

“What if you went on a date,” my oldest daughter asked. “With that guy?”

I haven’t told the children I have already been on a few dates. The counselor we see told me months ago to ease them into news like this and obviously proceed with caution when I do decide to introduce them to anyone. They only know the name of someone who had been texting me lately but I never made a big deal of it around them because when and if it became nothing I wouldn’t hurt or confuse them.

I said he and I were probably just friends now. Mommy is not everyone’s cup of tea, I say out loud, if only to realize that truth myself.

Then there’s the Internet. Weeding through Internet dudes interested in a widow with four kids is not pretty y’all.

Neither are they, though. Some are creepy. Some are probably married. Some only want a quick hookup and nothing more. I found myself conversing with a guy the other night who –from his tiny online photo– seemed to be quite perfect. Good looking, great job, loves The Office (that’s a deal breaker y’all) and not married. We talked a while. Then I realized he was from Canada… which is not close to Kentucky. Annnnnnd that was the end of that.

It’s too hard though. It’s exhausting and sometimes it’s heartbreaking too.

Because when you do start going out and liking someone enough to want to make out with them (oh do I miss a good makeout session!) things usually just crash and burn or go sour. It’s something I take personally that leaves me wondering about all the things I know are wrong with me. It puts me in a funk and I hate it.

I hate being out here some days, sweating on a treadmill or ripping (literally) every hair from my 43-year-old body for the sake of getting a date.

I’m in the second year of widowhood now. This is it. This is normal life now. The second year is when it really starts setting in that your person isn’t here and never will be again.

He loved me despite the most horrific deal I made with a car salesman back in 1999. He loved me when I told off an asshole boss in 2001 and quit my job when I didn’t have a backup plan.

Even when I never found time to shave (or have a beautifully manicured hoo-ha courtesy of some Kelly-Clarkson-inspired f-bombs) he still loved me.

And I just don’t know if that kind of love happens twice in a lifetime.

This post originally appeared on Kentucky Mom To Twins And More

Child Dies After Contracting B…