Filter Free Parents
Home Kids I’m Grateful For the Milestones Still Happening When The World Has Seemed...
“Let me take a picture of you in the last night of your old bed!” I urged my younger son. Instead, he threw the blanket over his head and giggled.
I sighed and smiled. Sheesh. After some playing back and forth, I finally got my photo.

Tomorrow, my younger son – my kid nicknamed Little Bird – will be moving out of the bed he’s used his entire life.

His crib transformed into a bed, so he’s been using a form of the same structure since he was an infant. It still has a little of that “crib” look to it, with the high arch against the wall. I remember picking him up and placing him in it from where he fell asleep in my arms, careful not to wake him.
Then, once he transitioned into the bed, I would scoop him up in the middle of the night from when he fell on the floor. (He hated the rails on the toddler bed.)
Replacing the blankets he had thrown off in the middle of the night, gently layering them one by one. 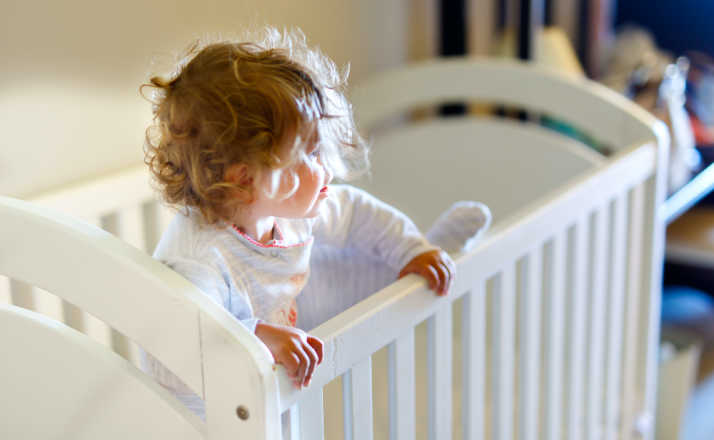 To make space in his room, we also moved his giant armchair.

The one I spent hours in, rocking and nursing him. The one that I sang him the song House on Pooh Corner tens, perhaps hundreds of times. The one I nestled him in my lap, my arms wrapped around his tiny body.
The one where I read books with him propped up on my lap, trying to be engaging enough for his wandering toddler mind to listen.
But the chair hasn’t been used in months for anything but hosting innumerable stuffed animals. We now read on his floor, me leaning against his dresser for support.
Or sit on the falling-apart couch in our living room, stained with tea and ripped by children and bunny teeth. The chair will now become just another chair downstairs, still for reading and playing and sitting on, but not his. Not like it was.

This year has involved missing so many milestones of childhood.

His three’s year of preschool was abruptly ended by COVID. The school considered reopening this year, but couldn’t get enough people to sign up. As of this week, his final year of preschool is no longer.
No preschool graduation, no transition between home and kindergarten, no goodbyes to classmates. Just nothing.
My husband and I visited the school recently to solve some maintenance issues. It was quiet. Abandoned.
The playground slide had dirt stains where mud had accumulated and not been wiped off by giggling kids. The classrooms were dark, dust settling on toys.
The wall where the graduating kids paint their handprints on was missing the class of 2020 and 2021. The printed-out articles on the bulletin boards were from March of last year, a moment stuck in time.

That’s what so much of this past year has felt like – being stuck in time and space.

And yet our children continue to grow. They continue to change and turn from babies to children to young adults before our eyes. They will not stop for anything, even when it feels like everything else does. Even if we want them to.
So this milestone to a “real bed” feels momentous.
It’s a reminder to embrace the milestones that we can. So tonight after I took my photo, I sat next to him as he fell asleep. It was my small form of acknowledgment and bittersweet celebration.
This post originally appeared on the author’s Facebook page.