The first day of school is typically a pretty big deal for parents and kids alike. A lot of thought goes into the selection of the “perfect” outfit to herald that special day.

The morning often involves a staged photo shoot, and some parents really nail it with those cute and crafty hand-held signs (wish I was that cute and crafty!).

There’s something extra-special about the first day of every school year that makes us feel like our kids should start their day off dressed to the nines. By the following week (or hell, the following DAY), it’s business as usual in terms of our kid’s clothing choices for school.

But that very first special day, we send our kids off to school dressed for success. How they look when they get home, however, is a total crap shoot.

One mom’s “before and after” pictures of her daughter’s first day of school have gone viral after they hilariously illustrated just how INTENSE that first day can really be for kids.

Jillian Falconer of Neilston, Scotland, was excited to commemorate her five-year-old daughter Lucie’s very first day of school at Neilston Primary with the traditional “first day” photo. Lucie was dressed impeccably in her new freshly ironed school uniform, with her hair neatly combed, and offering the camera a lovely smile.

She even sported an adorable hair bow that matched her uniform tie, which is just the cutest.thing.ever!

While Lucie’s picture is certainly a sweet reminder of her very first school morning, it’s not necessarily newsworthy on its own- countless parents have very similar pictures of their own child that closely resemble this one.

Lucie’s “after” shot is the reason that mom Jillian’s photos have gone viral; it’s a hilariously stark contrast to the sweet, orderly appearance that Lucie left for school with that very same morning.

We often ask our kids, “How was your day??” when they arrive home from school. In Jillian’s case, it was immediately very clear how Lucie’s day was.

While “a picture’s worth a thousand words”, Jillian was nearly struck speechless by the sight of her daughter when she arrived at Neilston Primary to pick Lucie up:

BAHAHA! It was obviously quite a day! The neatly pressed uniform is no more; the shirt is rumpled, the cardigan askew. And the hair- the hair says it all. Even the bow barely survived the day, hanging on by only a few threads of hair.

While Lucie may have started her first day of school one way, she ended her day a little, um, worse for wear?

Jillian explained to Barrhead News that she was shocked by her daughter’s  afternoon appearance, and:

I asked her what she had been doing at school and she said  “Oh Nothing, I just played with my friends.”

That must have been some INTENSE play! Even her backpack looks tired.

Jillian uploaded the shots to her Facebook page, and local news outlet Barrhead News reposted them for their “Back To School” series. Lucie’s pics quickly went viral, because they nail the reality of life with kids!

People loved them, and the comments were hysterical:

That first day is rough on everyone- even the teachers!

Thank you, Photoshop expert, for nailing this one. So, so good.

Agreed- at least the bow survived!

Funny, but I’m pretty sure this is a universal kid reality!

A few commenters even posted “before and after” pics of their own kids to prove that the struggle is real: 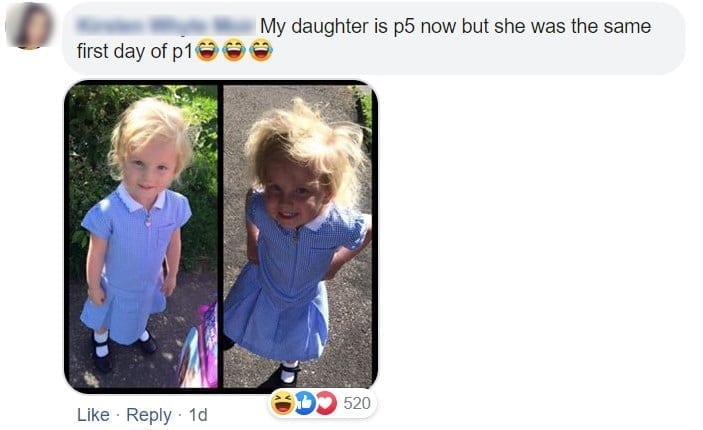 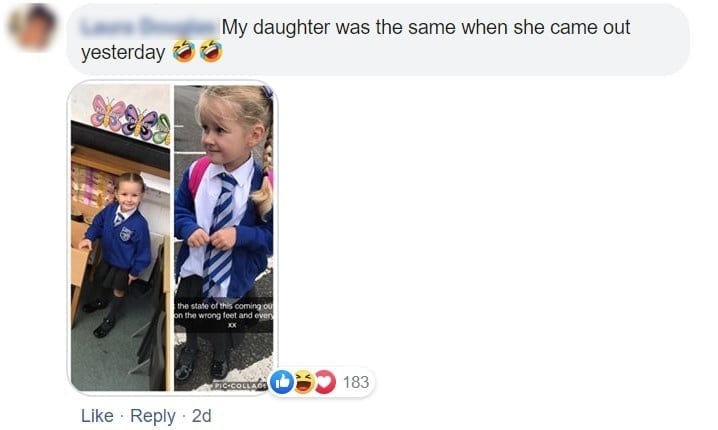 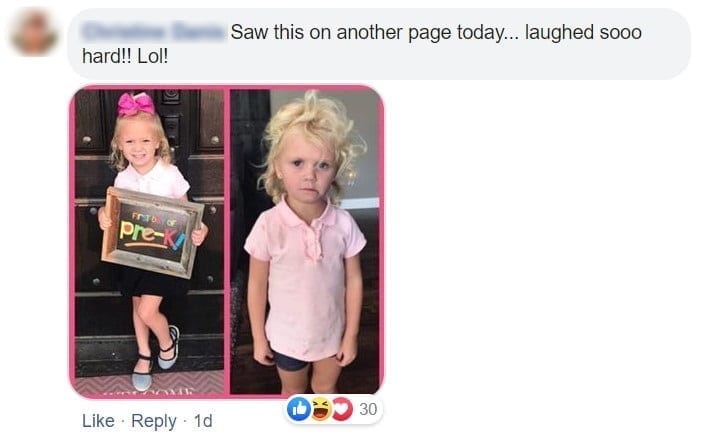 The enthusiastic support that the post received -over 18K likes and 10K shares in three days- proves that parents not only appreciate the humor of Lucie’s transformation, but definitely can relate to it.

We may help our kids start their day looking their very best, but there’s obviously no guarantee that they’ll end their day in the same condition.

But the reality is, the more disheveled a kid is, the more likely it is that it was a fun and active day! So thanks, Jillian Falconer, for reminding us that we’re not the only parents out there with kids that learn and play with lots of… enthusiasm.