At long last, your wedding day finally arrived! All of that intense planning was a great success; the vows have been shared, the rings exchanged, and you’re officially married.

Hopefully you’ve also enjoyed a big party to celebrate your nuptials, and then comes the best part- the honeymoon. The honeymoon’s a great opportunity for you & your bride (or groom) to get away from it all, and to enjoy some relaxing time together.

Unless, of course, you’re planning on ditching the honeymoon in favor of a unimoon. If that’s the case, you’ll be flying solo- literally.

A unimoon -or “solomoon” as it’s also called- is a trip that newly married couples take following their wedding. And yes, most of us typically refer to that as a honeymoon, but the catch here is, the couple takes separate honeymoon trips, hence the “solo” part.

(I know, right? It’s one of those many, “WTF??”, head-scratching moments when we try to decipher what the newest weird life trend is, and more importantly- why are people doing this??)

According to The New York Times, numerous couples are now opting to forgo the traditional honeymoon experience in favor of taking separate vacations immediately following their wedding. In other words – solo honeymoons.

To newlywed Irene O’Brien of Dublin, Ireland, taking a unimoon was a no-brainer for her and her husband, Mel Maclaine. When interviewed by The Times about unimoons, she explained that she & Maclaine had contemplated planning a traditional honeymoon, but her groom had an intense desire to travel to France to watch the Northern Ireland soccer team play in the European Championships. O’Brien, who is not a soccer fan, preferred to travel to Canada to spend some time with a friend who had moved there.

Their solution: following their wedding, O’Brien traveled to Canada while Maclaine traveled to France with friends. As O’Brien succinctly sums it up:

Neither of us wanted to be where the other one was.

Ok, so I’m no marriage expert, but I’m thinking that the whole point of getting married is to be where “the other one” is.

At least at the beginning, when you’re supposed to WANT to be with your spouse… a lot. I can’t quite imagine leaving our wedding, grabbing my suitcase & telling my new spouse, “Well, that was cool, huh? But after all of those hours celebrating our wedding, I could use some time to myself. See you in two weeks, k?”

The same unimoon satisfaction, however, was reported by William & Melissa Powers, newlyweds who also chose to go the unimoon route. He went to Paris & she went to the Dominican Republic to fulfill a work commitment. As Mr. Powers reports:

It’s a very individualistic, modern practice of efficiency over everything else.

I don’t know about you guys, but my honeymoon was anything but efficient… but that was the POINT! It gave me & my new husband a chance to unwind, relax, and to spend a unique period of down time together before embarking on the more routine aspects of life together. 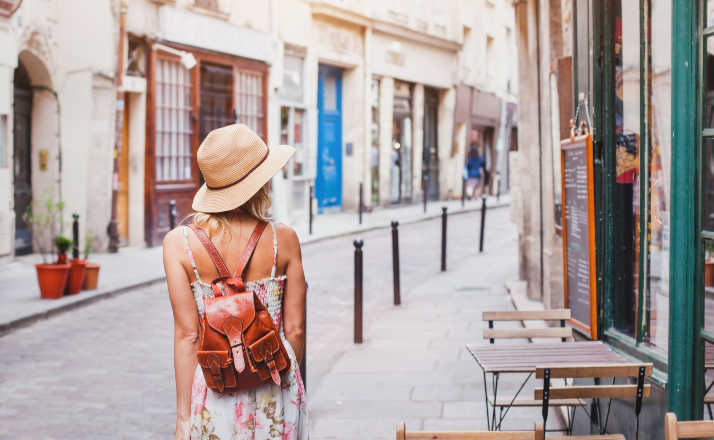 Some of the most common reasons that couples are now choosing to go on unimoons rather than honeymoons are: work commitments or the unwillingness to compromise on the same vacation destination.

Whoo boy! Listen up, newbies: if you can’t compromise on a honeymoon locale, your marriage is going to be ROCKED when you have to compromise on every.other.thing that life with another human being (aka “marriage) requires you to have to work out together.

My suggestion: skip the whole marriage thing and just get a dog.

Some advocates of solo honeymoons (unimoons) think that the concept is merely the evolution of modern-day marriage.

According to sociologist & dating expert Jessica Carbino, with the expectation that your partner will be fulfilling your every need -physically, emotionally, sexually and spiritually- it seems beneficial to take a break from it, so to speak:

perhaps separate vacations is a recognition among some couples that all expectations cannot be met by a single person.

Fair enough; it isn’t reasonable to think that your partner can meet ALL of your  expectations. In fact, a marriage is likely healthier without that intense pressure put upon your spouse to meet your every need.

It’s totally cool to have different schedules, or take time apart to pursue your own interests. In fact, most marriages need some alone time & individual pursuits in order for both partners to thrive. While my husband & I don’t take separate vacations, I can see why some couples would enjoy that time to vacation in a locale they prefer.

But to get married and IMMEDIATELY pursue your own interests seems a little counterproductive to the whole “unity” concept of marriage, no?

Most couples have bachelor and bachelorette parties (or more commonly nowadays, weekends) in which the respective couple gets a chance to each party solo with his or her friends, celebrating their “own” time prior to getting married. That’s the whole POINT of having those events, because once you’re married, the wedding usually signifies that you are joined to your new spouse.

Unless you want to do your own thing from your brand-spanking-new spouse, in which case, you plan a unimoon. But why stop there?? How about separate houses, so we don’t have to share our belongings?

Or how about living in different parts of the country, since I love beaches & you love the Midwest?

Other experts express similar concerns to my own about the potential pitfalls of taking a “solomoon” directly after the wedding.

Helen Fisher, a researcher at the Kinsey Institute, states that separate honeymoons aren’t beneficial. She points out that a vacation together ideally set the tone for triggering deeper attachment to your spouse, a connected romantic love, & your sex drive.

You are at a new stage in your life when you marry, and you are missing out on triggering the three most valuable brain systems for a lasting relationship

And lest you think this only applies to couples that have not been living together prior to marriage, think again; Fisher states that regardless of time together, a wedding is still one of the bigger transitions in life, & should be acknowledged with more “togetherness”, not less.

It definitely seems like the new trend of “unimoons” is exactly that- a trend. What it boils down to is a vacation that is taken separately by couples. To each her (or his) own, but it’s definitely less palatable due to its annoying name.

I’ve Fallen In Love With…


“Meanest Parents In The World…