For most people, Christmas just wouldn’t be Christmas without Santa Claus.

We all know the guy – that jolly old man with a long white beard, twinkling eyes, and a little round belly that shakes when he laughs like a bowl full of jelly.

He’s dressed in a red suit trimmed in white fur, with a black leather belt and boots, and a red hat perched upon his head.

Merry Christmas to all. You’re welcome.

The post includes 4 equally fabulous photos of “Santa Blair” and is simply captioned with:

(And now we all want to be in Oklahoma City.)

The post is quickly going viral with over 4.5K shares and it’s pretty easy to see why.

There’s no denying that this Santa Claus is not like the others.

I mean, she’s not wrong. Sure, he may be dressed as Santa, if he were posing for the pages of Santa Vogue, and he may have a beard like Santa buuuuut…

Here take a look for yourselves: 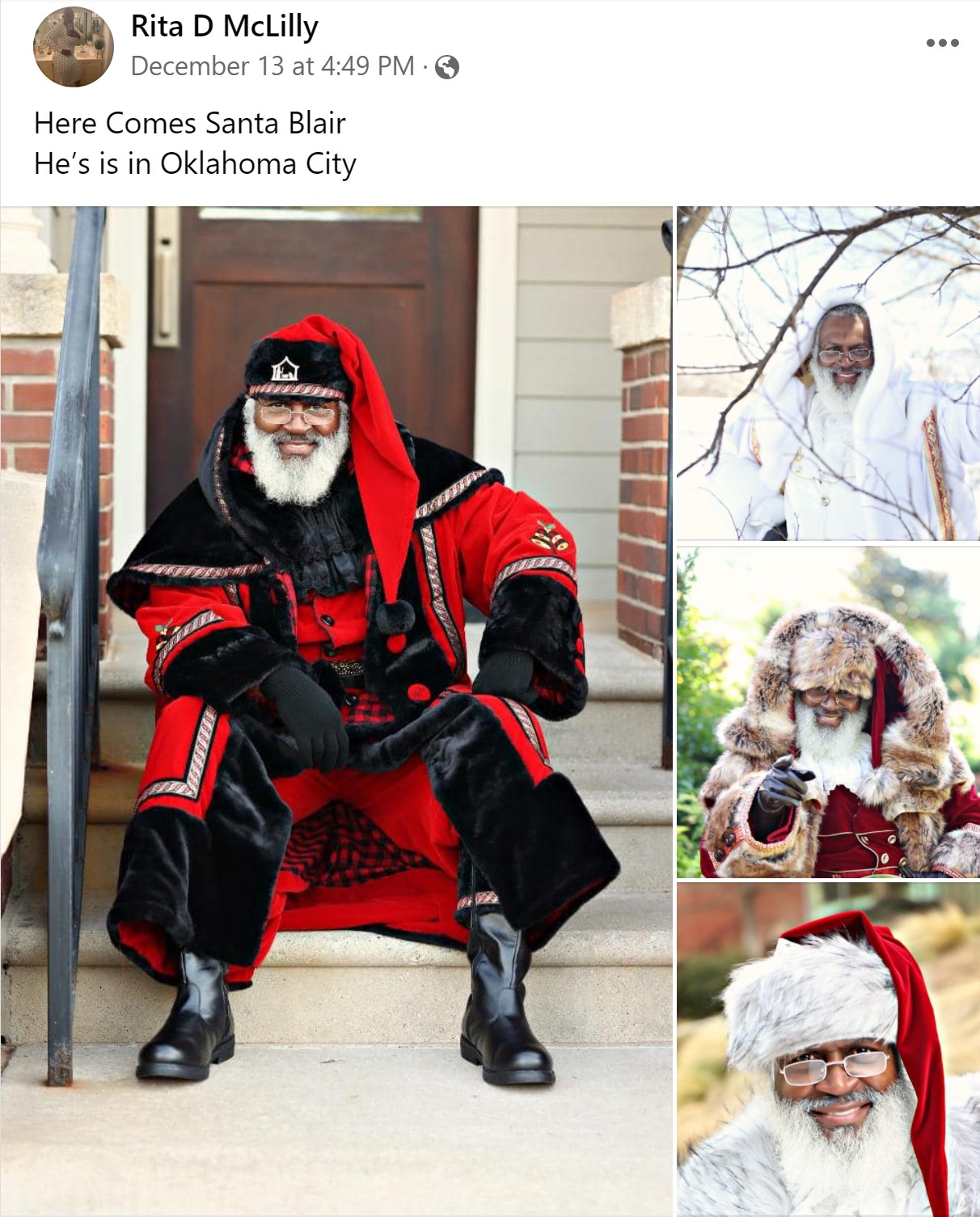 And while the pictures are truly fantastic, the real magic is in the comment section and ya’ll better watch out. Some of you are forgetting that Santa’s making a list and he’s checking it twice. He’s gonna find out who’s naughty or nice.

Which, quite frankly, isn’t hard, based on the comments.

And all I can say is, there’s a whole lot of people making the naughty list this year.

While some people only had eyes for the fashion:

Others, admittedly, had eyes for something else. And it’s not just Santa’s sleigh bells he’s ringing…

And she’s not the only one who’d be opposed to Santa “coming down the chimney tonight” apparently.

Forget about waiting until Christmas Eve, she’s ready for him now. After all, there’s no time like the “present.” Welp.

It seems that Santa Blair is giving out all the feels…

Making some people question, does Mrs.Claus approve of him leaving the house looking like this?

Which also begs the question, “Is there a Mrs.Claus?” Inquiring minds want to know.

Because if there isn’t, here’s someone who volunteers as tribute.

Other commenters would just be happy to have the chance to sit on his lap…you know, so they can tell him what they want for Christmas. Uh-huh.

And if he wants to come by for a visit, Tracy would love to see him. Okay fiiiine, the family too.

It’s obvious that this Santa has it all going on. And he has the ho ho hoes to prove it. Just ask this guy:

As for Santa himself? The real man behind the suit is actually Kenny Blair.

He was a wide receiver for the NFL, playing for the Philadelphia Eagles and the St. Louis Cardinals. When he’s not Santa, he’s a PE Teacher and Head Football/Head Baseball coach with Oklahoma City Public Schools.

And I think I love him even more now.

“To everyone, thank you so much, you all are to kind.

To all of the Beautiful Black Queens and Black Kings, I’ve never seen a Black Santa…..but thank you Jesus I was allowed to put on this RED suit and have a real beard to represent my Black People.

To my white Santa’s brother much respect and love, we are in this because of the birth of our Lord and Savior “King Jesus”

And to Kenny, we would just like to say, thank you for putting on the red suit and spreading some much-needed Christmas cheer. We’ll never think of Santa the same way again.