We can all agree that 2020 has NOT been a particularly enjoyable year. Although there are only less than three months left until 2021, the vast majority of us are more than ready to send 2020 back to the fetid pool of aromatic dog feces from which it sprung.

But while many of us are having a crap year, there are some poor souls out there that are REALLY having a rough go of it.

A professor’s email to students about rescheduling an exam is going viral on Twitter because his last few days were probably worse than your entire YEAR. 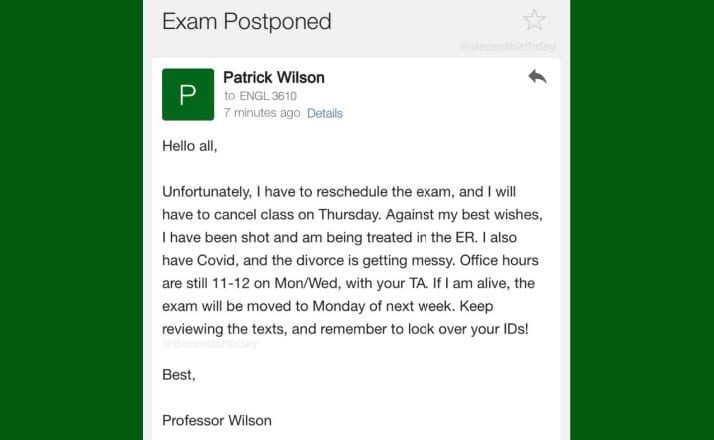 Twitter user Decent Pigeon (@decentbirthday) received an email from his college professor with news that most procrastinating students always hope to receive, but never seem to actually get – until this one magical day.

The big test was postponed. And not only that, but class on Thursday was cancelled, too- score! Must be Decent Pigeon’s lucky day, am I right?

Both the exam and subsequent class session were cancelled because, as Prof. Wilson explained via email:

Against my best wishes, I have been shot and am being treated in the ER.

First off, props to this professor for being so conscientious as to email his class from the ER- that’s devotion to education, indeed!

As for being shot “against my best wishes”, well, we appreciate the professor’s obvious efforts to try & avoid bullet wounds, because that seems like a sound practice for all sensible human beings. (Point being: he tried his best, class.)

But it’s not just bullet wounds that are forcing Professor Wilson to cancel the exam; he’s clearly having rough time, because:

I also have Covid, and the divorce is getting messy.

(When having Covid is the “also” footnote in your life, perhaps it’s time to examine your life decisions.)

But life decisions are probably the issue here for bullet-riddled Professor Wilson, because “the” divorce is getting messy, which indicates that although the Covid may have come from an arbitrary source, you can’t help but wonder if the whole “I have been shot” saga has come from THE divorce.

And considering that he assumes his students are already aware of “the divorce”, I’m willing to bet that his class lectures were less educational & more “and about that bitch, the soon-to-be-ex Mrs. Wilson”.

But best stay prepared, kids, because that cancelled exam is still on the schedule.

If I am alive, the exam will be moved to Monday of next week.

Students, it’s best to operate under the assumption is the test is still “game on!”, unless, of course, Professor Wilson drops dead from his gunshot wound(s?). Or the Covid. Or from the soon-to-be ex-Mrs. Wilson’s divorce schemes. Or from that bitch Carole Baskin.

Like MANY of us right now, Decent Pigeon was perturbed by this rather cryptic professorial email, & did what most of us would do when concerned about our educator’s general well-being:

He posted it to Twitter, of course. Because this drama has “internet comedy gold” stamped all over it, baby!

Just received this rollercoaster of an email from one of my professors pic.twitter.com/6vGfiRNFI9

And the legions of Twitter folk did what they do best- they shared their own hilarious thoughts on poor Professor Patrick Wilson’s recent plight.

What did I just READ pic.twitter.com/M5Gb2A0n5F

Some were just trying to put the puzzle pieces together; how did this all fit into one tragic email??

Okay, but how does Covid fit in? pic.twitter.com/EfGWWm3N97

Who the FUCK shot Professor Wilson AGAINST HIS BEST WISHES???

And in response to this passionate query, some had theories:

Many Twitter peeps were astonished that someone would have the nerve to shoot Professor Wilson despite his best wishes to avoid the very thing:

But you have to give the guy credit- this is one badass excuse for cancelling class, amirite??

I remember walking up to physics class on a Friday to see a handwritten note: “Class canceled due to lack of interest”
and was impressed
But this is on a whole new level. Respect.

Though it DOES make it difficult for his students to miss class due to any of their own… mishaps.

I have no idea what to expect from the student excuses, but they’re going to have to be exceptionally creative to overcome this opening salvo! <Hope Prof Wilson fully recovers>

Exactly- just try and use a weakened, “Sorry I overslept.” or an “I had a cold.” as your excuse for missing this class.

There were some that were less than sympathetic to Wilson’s weeping wounds & Covid cough:

How hard is it to proctor an exam? seriously, just sit there and bleed for a bit while the students take it.

But most people appreciated his, um, HONESTY.

ITS THE CASUAL MENTION OF “I HAVE BEEN SHOT” THAT TOOK ME OUT??? LIKE BRO GOT SHOT, DIVORCED, AND HAS THE VIRUS?? MY APOLOGIES FOR BEING A BAD STUDENT BRO LMAODISJAJ pic.twitter.com/4GpoiC3SPe

Professor Wilson’s 2020-esque email quickly became the focus of Twitter’s fascination, earning over 713K likes and 104K likes in just under one day.

And although we still have so.many.questions about Professor Wilson’s apparently complicated personal life, the primary concern on Twitter’s mind:

Did Professor Wilson live to administer his students their much-awaited (or dreaded, for the slackers in the class) exam??

Well, who better than Professor Wilson himself to respond? And just when you thought this couldn’t get better…. oh, it does.

The prof was somehow informed of his recent social media celebrity status, & reached out in another email to assure his legions of new fans that is indeed very much alive.

Fortunately, neither his gunshot wound nor his Covid case were serious enough to result in his untimely demise. As for that exam?

The exam is still on Monday. His parting words of caution to his students:

Unlike my wife, I expect you not to cheat. Good luck to all!

While 2020 is kicking our collective asses, Professor Wilson is a shining example of the ability to ace some very painful (literally!) life tests … all in one day, apparently.

You know what? If this poor man can keep on trucking after getting shot while infected with COVID after his wife decided to be a cheating whooahr’, then I have no reason to throw in the towel.

He’s an inspiration to us all!