I have a picky eater. He’s adorable, intelligent, friendly, and generally does what I ask of him except when eating his veggies, specifically cruciferous veggies like broccoli, Brussel sprouts, and cauliflower.

I would be lying if I said there are times when I want to rip my hair out at the frustration of trying to get my picky eater kiddo to eat a healthy, balanced diet that includes vegetables.

We have tried everything to get this sweet child to eat his damn veggies. I’ve slathered on cheese, offered ketchup on the side, breaded and fried the suckers, but nothing works.

If my son even thinks that broccoli has touched his plate, he won’t go near his dinner despite my protests and threats to take away dessert.

But just when I was starting to think that this is just some willful phase, the science community is holding up a finger and asking parents everywhere to take a pause.

Researchers have found that some kids who are forced to eat certain cruciferous vegetables may indeed experience a form of torture. 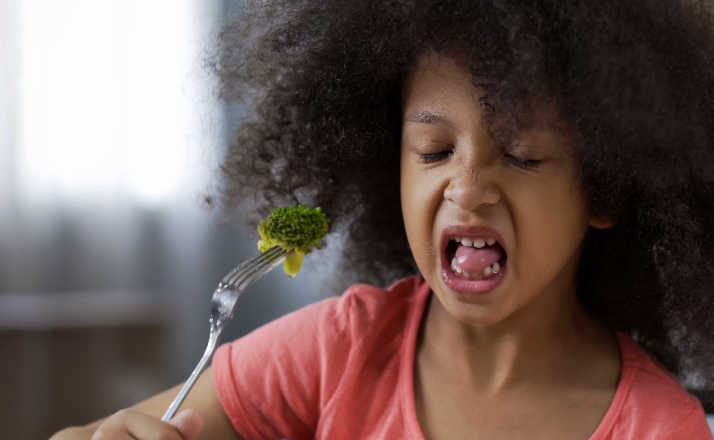 The study was published in the September issues of the Journal of Agriculture and Food Chemistry. Researchers wondered why some kids downright hate a specific class of veggies that includes broccoli, cauliflower, cabbage, Brussel sprouts, and others.

Scientists already know from previous research that adults who strongly dislike these same vegetables also have an enzyme in their saliva called cysteine lyases.

Cysteine Lyases reacts to enzymes found in the vegetables, which work together to create a horrible, sulfuric taste and foul breath.

That sulfuric taste? It is very similar to rotting meat. Yum, right?

So, when researchers noted that some kids appear to have the same level of aversion to the vegetables that cause so much dinnertime trauma for adults, they began to wonder if maybe kids have the same enzymatic situation playing out on their tastebuds too.

Don’t worry; no picky eaters were tortured with Brussel sprouts for this research.

How the Australian research team figured out this picky eater problem was pretty cool.

They took 98 volunteers made up of parents and their picky eating kids between the ages of 6 and 8-year-old.

Instead of making everyone eat the veggies, they collected spit samples and mixed them into cauliflower samples.

The researchers wanted to measure the reaction between the enzymes to see just how many sulphuric compounds would be released.

Then, the researchers gave each participant a blind taste test of cauliflower to measure their reactions to the flavor.

How much of a green face would these parents and picky kids make? It turns out, a lot.

Researches found that parents and kids shared very similar measurements of volatile compounds in their saliva, which showed that what they experience as flavor is likely a rather nasty mix of putrid meat and waft of fart. Fun, huh?

What’s more, researchers also found that the higher the measurable levels of volatile compounds were present in the samples of mixed saliva.

The cauliflower appeared to directly correspond with the level of yuck the participants showed during the blind taste test.

So, the next time my kid starts crying at the dinner table that he hates his broccoli, I’ll believe him.

Mom Is Angry That Her Adult Child G…