It happened last week. It wasn’t the first time and I am certain it won’t be the last. I wanted to run away.

It had been a particularly challenging few days. All four kids were adjusting to new classrooms and new teachers and new expectations, and for four kids who desperately need a routine to feel secure, they were struggling. For different reasons and in different ways they were struggling. And they needed me.

So much more than usual and all at the same time. My husband works nights which means that after school, dinner and bedtime are all me.

And it was simply and suddenly too much. I couldn’t breathe.

I was consumed with the guilt of not being enough for all of them and I felt like a failure. At that moment I wanted to run away. I wanted to get in my van, back out of my driveway and see how far a full tank of gas and Bon Jovi would take me. The very idea of hearing “mom” even one more time that night broke me.

I looked at myself in the mirror and I didn’t know who I was anymore. I looked tired and serious. Desperate even.

I missed the girl I once was.

The girl who found a silver lining in any situation.

The girl who stayed up all night writing poetry and stopped her car to run out into the middle of open fields when there was a full moon, just to soak it in. Just to feel the night air touch her skin and be inspired by the beauty of the sky.

I couldn’t remember the last time I had felt inspired. I wasn’t sure what I felt at all at that moment. I missed that girl. I missed her with the kind of deep ache that you feel after breaking up with your first real love in high school. I wanted her back. 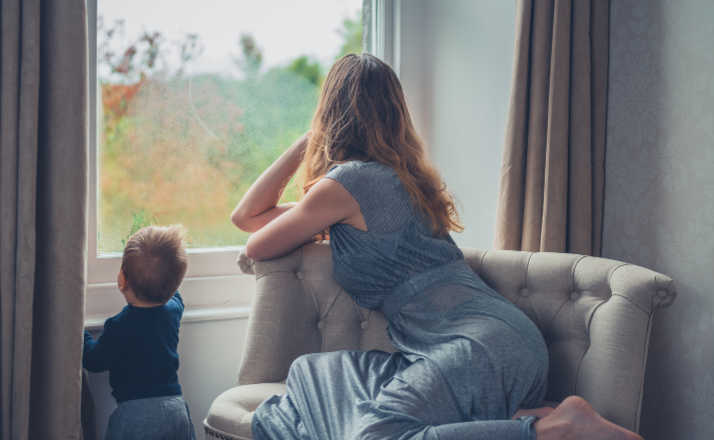 And then the downward spiral of guilt hit hard.

Like a truck into a brick wall, filled with my shortcomings and failures. The tears spilled hot and fast, further blurring the face in the mirror. What was wrong with me? What kind of mother would allow herself to have such thoughts?

I had four healthy pregnancies which resulted in four healthy babies. That was four more than a lot of women ever got to have. I had a home for those children and their bellies were full as they slept in soft beds wearing clean pajamas.

Who was I to complain about anything? What kind of selfish monster would even begin to resent such a beautiful life?

But, that’s what society tells us. That’s what other parents tell us. Try harder. Spread myself even thinner. That’s what was expected. But I wanted to run away.

Luckily for me, I already had plans with an old friend for later that week. We planned to go horseback riding which was a passion for both of us before becoming moms.

We had been trying to coordinate our schedules for over a year to make it happen. A sick child, a class trip or a work commitment always seemed to prevent us from making it work. But we finally did it. It was glorious.

I breathed for the first time in weeks.

I felt light and airy, like the bright orange leaves dancing on the wind around us as we rode through the forest. Surrounded by nature and the laughter of two friends who understood everything each of them was going through, I found her again. The girl I was missing so badly.

I went home that day and I couldn’t wait to see my kids.

I couldn’t wait to grab them and hug them and feed them and care for them and hear “mom” a thousand times over. I couldn’t wait. I was filled with the joy of my life as their mom again. I had needed to recharge.

I needed to run away. On a horse, into a forest, with an old friend who wouldn’t judge me. I needed to do something for me.

From the moment we become parents we are told again and again, “Enjoy every minute. It goes so fast.”

Enjoy every minute is an insanely unrealistic and dangerous expectation to lay at the feet of parents who are already burdened with the crushing worry that comes with raising a human being.

It simply is not possible to enjoy every minute of raising our children. It isn’t. There are days when parenting will be hard, and lonely and messy and gut wrenchingly painful.

You won’t enjoy those days.

There are days when you will lose yourself so completely that you won’t recognize yourself in the mirror anymore. There are days you will be consumed by the loneliness of it all because we don’t encourage parents to reach out. We don’t make it acceptable to sometimes want to run away.

Heaven help the parent who expresses their feelings on those difficult days to others. Are they met with the loving support of others who are quick to empathize and offer comfort?

No. Instead they find an angry mob on their front porch, wielding pitchforks and torches lit. So quick to crucify them for not being enough. For not spreading themselves even thinner. They find themselves accused of poor parenting by a jury of people who should be the last to make those accusations. Other parents.

And that shit needs to stop.

Not everyone is lucky enough to have an old friend nearby who can run away with them into the woods for a break.

Not everyone has someone to watch their children so they can have a bit of time to themselves. A moment to find themselves again.

And for those parents and for all parents, we need to support them.

We need to support each other.

We need to listen with empathy when they tell us they just can’t do it anymore. We need to tell them it’s ok. It’s ok to feel like running away. It’s ok to want something for themselves. We need to stop pretending that anyone can happily be everything to everyone all the time. We need to be honest. We need to be a safe place for fellow parents to admit that they have simply had enough. Because we have all been there.

No one can enjoy every single second of parenting. However, if we support each other and stop pretending that’s even a possibility, I’m one hundred percent certain that we could enjoy a lot more of this journey.

A mother’s love is a powerful thing. The moment we see our precious newborns, we seem to be bonded to … Read More