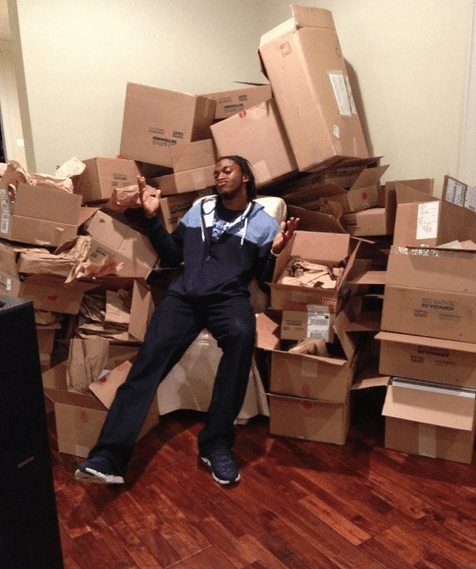 It’s been awhile since I’ve gone off on a mad tangent. I’m about to do just that, so either cover your eyes or quickly click to the next post. I won’t be offended. The thing is, I’m pissed. Right down to the core ticked off at the apparent stupidity of some people in our society. I know. It’s not nice to call people names or insult them. Well…Who in their right mind showers the rich with wedding gifts because they accidentally discover their wedding registry online? These people did and have – in outrageous numbers. What really irritates me is how pompous that little QB looks sitting there ON TOP of the gifts he’s received, which are thrown into a HEAP. One huge messy pile of wasted money. Money that could have gone into a child’s education or to help the needy.

According to this article, Redskins quarterback Robert Griffin III is going into the second year of his guaranteed $21-million rookie contract and stands to make quite a bit more in salary and endorsements throughout his career. That’s more than what most people make in thirty lifetimes! Here are a few reasons fans cited for dumping money into tea cups and bed sheets rather than something more important:

I get passion and the love of sport. I’m a New England Patriots fanatic. But you would NEVER catch me buying one of the players a gift. Not considering how much they make and the obvious lack of respect for the gifts received. I don’t care what kind of thanks ya’s are being posted on Twitter.

Forrest Gump was absolutely right. Stupid is as stupid does – apparently.

What do you think…Am I just being grumpy or is this just completely batship crazy stuff?

BTW – RGIII – Etiquette dictates that you send handwritten thank you notes within 30-days of receiving a gift. Get busy.

“You Invite One Child, Y…