We all love to joke about the basic mom attire. I’m talking about the messy mom bun, baggy tee, and, yes, those omnipresent yoga pants that dot every mother’s wardrobe.

Well, lest anyone think a day in the life of a mom is an easy task, just know that those stretchy pants that cover our fupas and hide coffee and burrito spills are lethal weapons.

Just ask action star Kate Beckinsale, who recently had a frightening run-in with a pair of leggings that landed her in an emergency room. Yes, in the emergency room.

Beckinsale was chilling out on CBS’s The Late Late Show with James Corden when she told a hilarious story that every mother can understand. 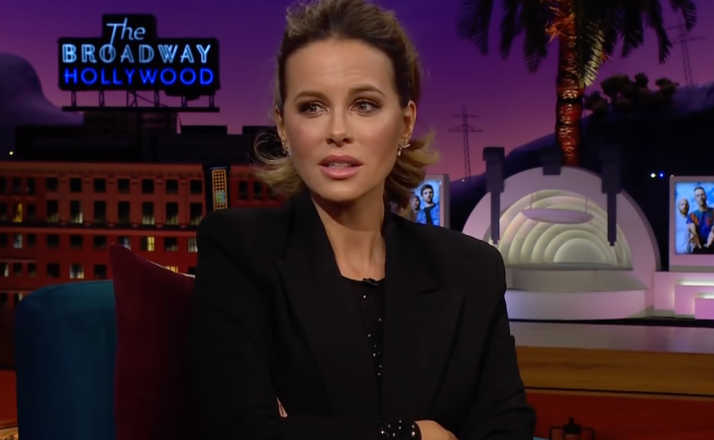 Because this shit is the stuff of nightmares – her leggings damn near did her in.

The Underworld and Van Helsing star is no stranger to getting physical.

With 53 TV and film credits to her name, she knows a thing or two about action, including the grueling physical work required to get into the fantastic shape that she is in.

But none of that training in zillion dollar studios prepared her for trying to get a pair of leggings on.

“Having done 800 or 900 action movies, I hurt myself putting on a pair of leggings in my hotel room,” Beckinsale revealed.

“I was doing a very intense emotional drama, and not running up walls or anything, and I was in my hotel room putting on a pair of lettings, and then it sort of felt like a guitar string snapped, and everything was horrific.

I mean, worse than having a baby bad,” she said.

After that scary moment, Beckinsale says that she couldn’t walk, lie down, or sit, which made the trip to the hospital total agony.

“Eventually, an ambulance came, and they sort of rolled out a sheet and picked me up in it like a sausage and put me on a gurney,” she said.

Thankfully Beckinsale made it to the hospital in one piece, and the fine doctors and nurses there were able to pump her full of drugs while she joked about they affected her.

But, damn. As a mother of three with an extensive collection of leggings, I am not fine; I am a mix of horrified and amused.

While we don’t know exactly what happened or what doctors said was injured, the phrase “snapped guitar string” sounds a lot like a torn tendon, which yikes! That sounds painful as hell.

Tendons are fibrous tissues that attach muscles to bone, and they can withstand forces five times the body’s weight.

Many women experience feeling their tendons stretch as their bellies grow during pregnancy, but that can cause some unusual pregnancy symptoms like feet going up a full size out of nowhere or even lightning crotch.

If a tendon snaps, that can cause extreme pain and lead to permanent disability. In other words, all jokes aside, Kate Beckinsale could have been in real serious trouble all over a pair of pants.

You can see the snippet of the interview here.


“Leave Their Ass In The Woods…

Summer is right around the corner and for all you Bambi fans out there you know what that means, the … Read More