We just had our third child after an almost six year gap, and the questions that I get all the time from people are “how is it going back to diapers after being free for so long?” And “how is this baby different from the others?”

There’s definitely a difference between baby number three and babies number one and two.

Some of the differences I can attribute to us, our situation in life going from our early thirties to almost our forties.

We’re older and wiser, a lot more stable, we have a little more money, a lot more house and a huge network of parent friends and family around us now.

When we had our first two children, we were in a tiny apartment, both working hard to get to where we are now. When we finally moved to a house and settled into our new life with a community of parents of young children, found a church, and got into the rhythm of life with little kids, we felt ready for another go at another baby.

This time when it wouldn’t be such a shock to our lives the way the first two were.

Having our first child was completely life changing. The earth shaking wasn’t unwelcome, just surprising because no matter how prepared you think you are, how many stories you hear and books you read, the reality is just different from what you’re expecting.

It was surprising to not be able to leave the house for three hours while this tiny little person napped. Every single day.

It was a surprise to be at the pediatrician all the time, for everything… even the tiniest things that in retrospect you wonder why you were worried about them.

It was a surprise to go to work and be called about something that was going on with your child and you realize that only you can make it better or fix it so you have to leave.

It was a surprise to realize how much you could love someone who didn’t even exist months earlier. A shockingly fierce, all encompassing love. A love so strong that you find yourself crying when your child gets injured or sick and cries because the pain they feel is nothing compared to the pain in your heart watching them hurt.

And then along came number two. I thought I knew everything because I’d done it all before.

Except that I hadn’t and I didn’t and that was its own challenge. First you try everything that worked with the first one because well, it worked…. except for this new baby it doesn’t. And then you wonder what’s wrong with you…. or with him. 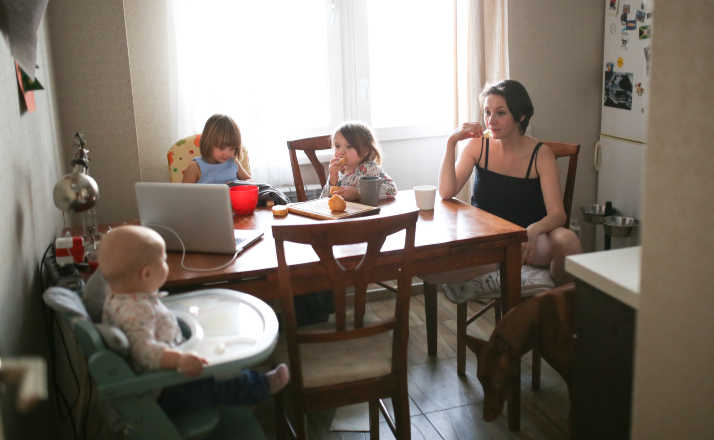 Nothing is ever the same and while both your kids have the same parents and you try a lot of the same things, they end up being their own unique little person.

But after all that, we stopped in our tracks. Two was enough for us.

We were really happy with our family unit and worked hard to get to that point. If anyone asked (and they did all the time!) we were done. I couldn’t imagine going back to the sleepless nights of the newborn stage. It was so much work just raising two little kids to be good people.

But it started creeping in… slowly like when I dropped them both off at preschool and was alone in my car, missing their cute faces. Or when they would do something that was so heartbreakingly cute, something they said or drew or sang, and I realized how quickly the years were flying by.

Or when they outgrow the toddler bed, or Mickey Mouse Clubhouse, or when they get on the school bus to kindergarten and you realize that what everyone says “that the days are long but the years are short” is true.

So we decided to have a third. Our third baby is a dream. Here’s why he is the easiest and I don’t mind going back to diapers.

Beyond knowing what to expect, already having a community, a church, and two little helpers, I think he feeds off the family energy which is busy and chaotic and happy. 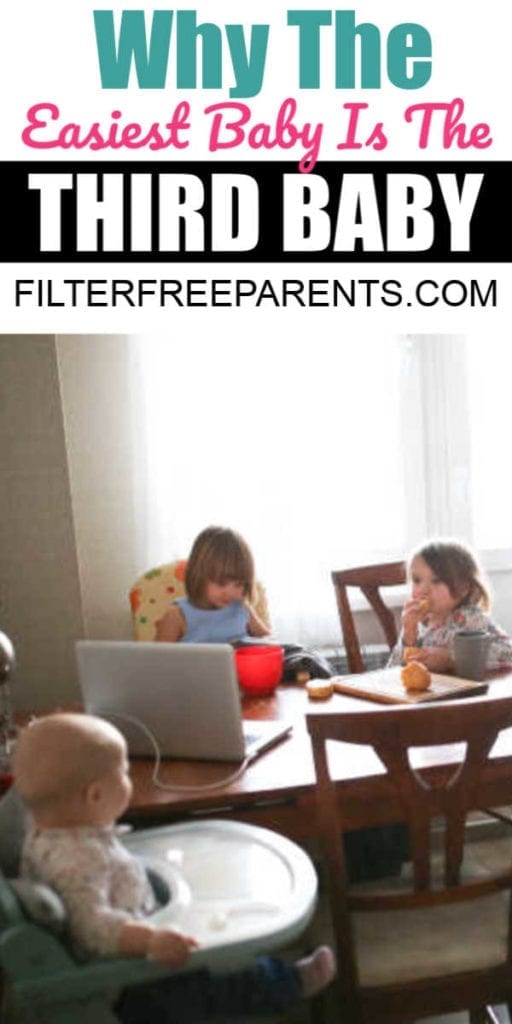 I’m okay with putting him down-because I have to-and I learned the tricks the first two times around. This time I learned how to cook with him in his bouncy seat – not because I was hungry but because the kids needed food and I had to. While it’s easy to overlook yourself, you can’t overlook the other kids and that makes me a better mom.

I also put him in the car to get where I needed to go mostly because I have to.

I also learned where and how to take “me” time when it mattered – by putting him in the bouncy seat when my husband showered so I could go work out in the mornings.

Never before in this chaotic life did it matter so much to have time to myself.

And I haven’t had to rush him to the pediatrician because I recognized things I saw the first two times around that didn’t scare me this time. (Eczema, birth marks, rashes, stomach aches) I didn’t wait to start sleep training because sleep was critical to me functioning in a family of 5.

And I cherished all the times he fell asleep in my arms, only wanted me to hold him, wanted to nurse for 30 minutes at a time-because I know from firsthard experience that these precious moments are fleeting.

I enjoy my rocking chair in his nursery because I know it won’t be a nursery forever. Soon it will be a big boys room- covered in Star Wars or Pokémon or whatever he’s into. But for now it’s just sweet little elephants and lullabies.

The third is by far and away my easiest and I enjoy it the most because I know how quickly they grow and everything changes.

For me, the third baby has completed our family.