One of my favorite features on TikTok is something called stitching. Stitching is when one creator posts something, and another creator can post a response alongside the original video to give viewers context.

It’s fantastic to watch songs get harmonized or comedians roast each other.

Many creators have taken a shine to stitching and use it to ask questions that they hope will attract responses.

So, when TikTok user @ericasaysstuff asked dads of daughters to share the moment they realized that the over-sexualization of women starts at cringe-worthy young ages, one dad stepped up and his answer is a doozy.

Michael Vaughn who goes by @world.shaker on TikTok posted a response to @ericasaysstuff and his answer is both accurate and breathtakingly horrifying, which is probably why it has been viewed 3.3 million times and has over 12K comments.

He starts off with,

and boy oh boy, I thought I knew where this was going with the predictable hot pick colors and fluffy dresses, but nope. Vaughn went somewhere darker that needs to be talked about.

Vaughn shares that his newborn daughter was gifted a onesie that read, ‘Sorry boys, dad says no dating,’ and yikes, he’s right.

“I guess I’m wondering who they thought was going to date our 0-month old daughter,” he says.

But it’s not just the inappropriate language on a baby’s onesie that bothers Vaughn, as he points out, “all girls’ clothes are remarkably annoying for so many reasons.”

And he’s not wrong.

He goes on to point out precisely what it is about girls’ clothing is so ridiculous.

I was fully expecting him to point out the ruffles, and the sparkles, and the vast array of pink that assaults the eyes – and he does. And, that appeals to some girls, which is fine, but the problem is the fact that it’s typically the only choice for girls. And some girls don’t like pink.

But it was more than just the weirdly cartoony version of femininity that designers saturated into every inch of girls’ clothing. 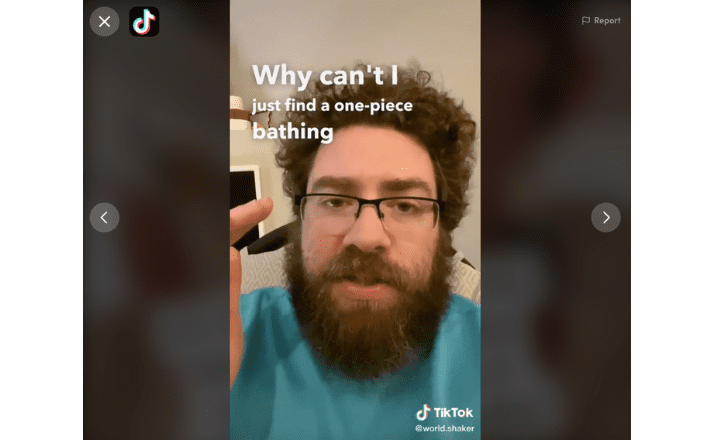 It was when Vaughn asked, “Why can’t I just find a one-piece bathing suit for my daughter?” that stopped me in my tracks.

Last year, I went through the hell that is bathing suit shopping for my toddler daughter, and I was straight up offended by the thong-like two pieces that anyone looked at and thought, “yeah, this is super appropriate for a toddler, we should sell this.”

Is it any wonder that by the time girls in the US reach 17 years old, 18% of them have been sexually assaulted or abused by their peers?

And, no – we don’t mean that if a girl chooses to wear over-sexualized clothes that she deserves to be assaulted. We just mean that as a society, we have to stop making clothing choices for them that are only meant to sexualize them as their ONLY choice.

According to a startling report by UNICEF, girls in the United States are over-sexualized from a very young age at home, in schools, in the media, and even by – you guessed it – clothing brands.

All of this demand on our girls to be sexualized objects has a terrible effect on their self-esteem, too.

According to the Dove Self-Esteem Project, only 11% of girls worldwide see themselves as beautiful. A shocking six out of ten girls don’t engage in life activities out of fears about how they look to others, and in Japan, according to Dove, a third of six-year-old girls across the country have expressed low body confidence.

Vaughn seems to be pointing this gross aspect of culture out when he calls out girls’ pants.

“Why are girls’ clothes small than boy clothes when they’re the same size?” he asks.

“Like, I don’t get why boys get normal shorts, and my daughter gets shorts with an inseam of negative two. Like, we legit buy boy pants for our daughter because girls’ pants are sausage casing leggings. I’m not squeezing a baby back into sausage casing every single diaper change.”

As a mom of a toddler girl, I would love to see some changes in how girls’ clothes get made and sold. For one, WHERE ARE ALL THE POCKETS? My daughter needs to shove random crap in her pockets just like her brothers. They get cargo shorts with 70 pockets; she gets two fake pockets where pockets should go on her pants.

Also, let’s try making one-piece swimsuits for girls that don’t look like a Victoria Secret Model would sashay down a runway in it, right? Like, try covering up my kid and just skip the thong-like back and plunging neckline.

And finally, please stop printing inappropriate words on girls’ clothes. We are advertising our daughters the way a pimp would.


Kids Use Ring Doorbell to Talk to D…