I knew when I was pregnant with our third child that things were going to be different.

She was our first girl, and not only was the laundry now pink, every other item was proudly emblazoned with a brand-new phrase in our home – “Daddy’s little girl”.

Now, I’m tall and loud and not the most delicate of feminine flowers, but I love makeup, jewelry, musicals, and sequined clothing. I’m independent, intelligent, and strong, and was looking forward to raising an empowered and capable young woman.

I was going to rock this girl mom thing.

The first hint to the contrary came while I was still pregnant with our daughter, about 7 months along. My husband had to travel to another country for work and was gone a little over a week. During that time I felt very little fetal movement.

Where I’d normally sat and watched my belly jump and jiggle all evening, I was worriedly drinking caffeine and doing kick counts, trying to make sure everything was okay in there, trying to get her to move. I’d had over a week of this anxiety, barely feeling flutters, when it came time to pick my husband up from the airport, safely returned home.

Within seconds – seconds – of hearing his voice, the sleepy baby in my belly woke up and went wild. She kicked, jumped, danced, apparently elated to have my husband back home.

She wasn’t even born yet, and already Daddy was her favorite.

Nothing has changed in the nearly eight years since their little reunion at the arrivals gate. Our daughter still very much prefers her Daddy, and she makes no attempts to conceal it… or spare my feelings.

After I nursed her she’d snuggle into him.

After she’d fallen she wanted him to help her up.

When she has field trips she groans when she hears I’m coming along instead of Daddy.

When she’s being dramatic and claims everyone is mean to her, she makes sure to exclude my husband from her list of tormentors.

She draws pictures of him, writes stories about him, plays with him, prefers him. And as thrilled as I am at the close and magnificent relationship she shares with a man as wonderful as my husband… it freaking sucks, too. 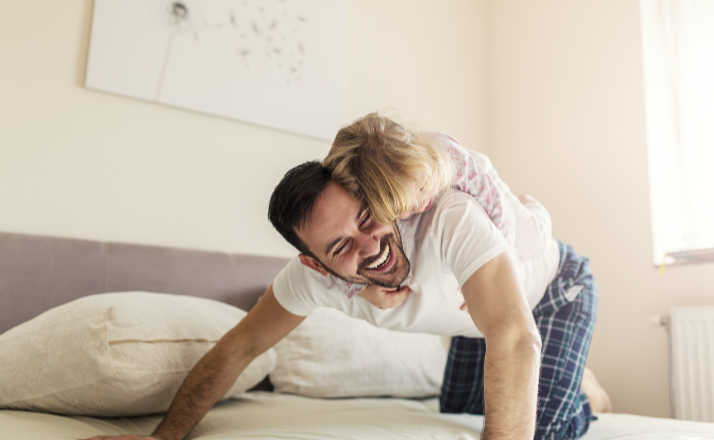 It hurts that she prefers my husband over me.

After the painful pregnancy I endured, she chose him.

After the horrific C-section I barely recovered from, she chose him.

After the dietary restrictions I took on so she could safely nurse when we discovered her food allergies, she chose him.

After the years I’ve spent at home with her, the tears I’ve shed, the nights I’ve stayed up with her, the glue gun scars I’ve accumulated while making bows, the hours I’ve invested, the sacrifices I’ve made, the angles at which I’ve bent over backwards to make sure she had everything she needed and was as safe and potty-trained and preschool-ready as she could be… she still chose him.

It’s like being the coach who gets a team to a Super Bowl watching the quarterback get all the glory.

Like the director of a brilliant show watching from behind the curtain as the crowds applaud the actors. I’ve done a lot of work for her, and I want just the teensiest bit of credit for it.

I know motherhood isn’t an investment you see a return on quickly. And I know that we don’t give to our children so that we can receive anything in return. Parenting isn’t a transaction, it’s an investment. In my head I know this. But in my heart… it hurts.

It feels like rejection, mostly because in a way, it is. I’m the first person she ever met.

She literally lived inside of me. It doesn’t get a lot closer than nursing someone for two years, changing their diapers, and, oh yeah, living inside someone. I’m the one running the calendar, picking her up from school, cooking the meals, doing the shopping, taking her to dance, teaching her to sing, and she’s indifferent to my devotion. The second Daddy walks in the door, no one else matters.

I’m offering my best to her, but to her, Daddy is the best.

When I see her after school I get a list of complaints about her day. When Daddy sees her after school, she runs to the door, jumps in his arms, and can’t stop giggling.

When I take her to the store for one-on-one time, one or both of us usually end up in tears due to one argument or another. When Daddy takes her to the store, they come back with inside jokes that last for weeks.

Their relationship really is something to marvel at, and I don’t begrudge them that beautiful connection. She hit the lottery getting my husband for a father, and the best thing I could hope for her as a young girl would be to have this kind of relationship with him. I’m proud to know she’s growing up knowing unconditional love and that her standards for men are going to be sky-high.

I’m amazed at the father my husband is able to be to her and I smile when I see them together. But I also ache when I watch them, just a little.

I want some of what they have, and it wouldn’t take anything away from them for me to have it.

I want to be as special as he is, but I’m just not. She loves me, don’t get me wrong, and I know she’s not totally apathetic towards me (at least not until she’s around 11). But I also know I’m not the favorite, and after just how much I work and sacrifice for her, that stings. And sucks. And as much as I love her and will still continue to work and sacrifice for her… I want a little piece of what they have.

I want to know what it looks like to see her light up when we make eye contact.

I want to know how it feels to giggle endlessly when we’re together.

I want there to be at least a second where she has to pause and think about who she’ll sit next to, who she’ll invite on her field trip, who she’s thankful for, who she’ll draw. I just want to be in the running, but Daddy is so far ahead that second place doesn’t even exist. 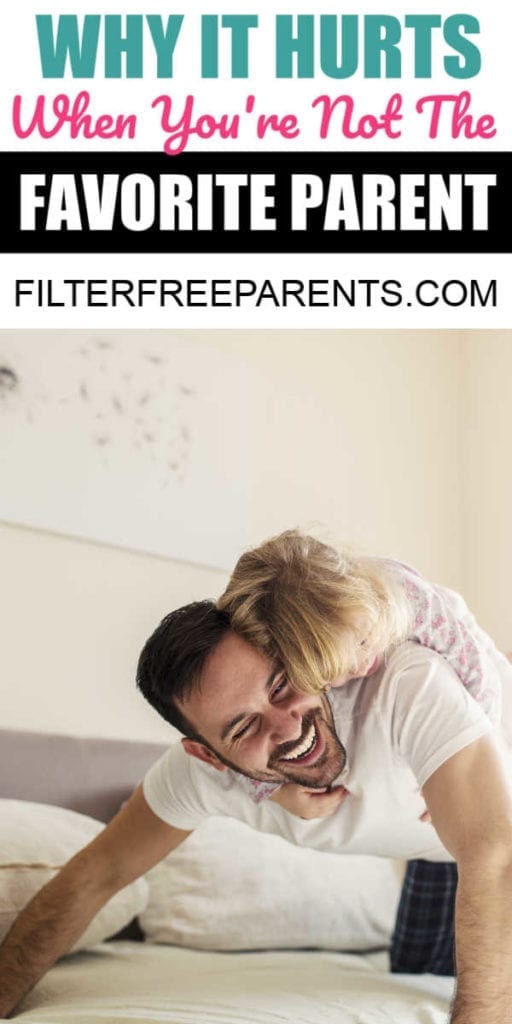 I know, I know, “daddy’s little girl” is a common phrase for a reason.

But watch 5 minutes of the Hallmark channel and you’ll see that close mother-daughter relationships are just as ubiquitous. I’m not saying I need Gilmore Girls, but I’d at least like the first few minutes of any Disney movie to be sad for her to imagine. “Oh, Belle/Jasmine/Ariel/Nemo doesn’t have a mom? No big deal, they’ve still got their Daddy!”

It sucks. I love her, and she loves me, but I’m just not her favorite.

I could try to buy her love with JoJo bows and potato chips, but if she was already choosing sides while literally living inside of me and I was her sole source of nourishment and life, I don’t think I stand much of a chance.

I’m not her favorite parent, and as much as she may be my favorite little girl, I’ll have to settle for far back second place. Unless we’re counting JoJo.