Dude. I live in Chicago and EVERY. SINGLE. YEAR. I wonder when the hell I am going to get out of this frozen tundra and move somewhere warm. Winter sucks.

Somewhere that doesn’t cause my fingers to seize up in pain just because they touched AIR.

And then the spring comes and like seeing your beautiful baby after childbirth it’s like the pain and agony of the last season completely fades away until the next year when it comes back in full force and you remember all over again why you hate this fucking place. You walk outside and breath through your nose and your nostril hairs freeze up into tiny icicles that stab you from the inside. Your nasal passages become miniature igloos made out of your never-ending frozen snot stream cubes because you caught a cold on the first frigid day and it still hasn’t gone away.

Your skin hurts. Everything hurts. Your body is frozen, literally.

You can’t move and when you do it’s like you’re going to shatter. Your skin gets so dry that it cracks and there is nothing you can do about it but apply copious amounts of lubricant to try to keep it moisturized but it’s basically impossible because the winter sucks the moisture right out of you every chance it gets.

It’s gloomy, which means you don’t want to do SHIT.

It’s bright as fuck outside because snow is everywhere but it’s dirty snow because it’s been driven on and slushed around and now your beautiful blanket of soft white snow is an eyesore of sludge and salt, but it’s still blinding to look at.

You don’t want to do anything but huddle under your blanket with a book but you can’t do that either because you just burned it on the stove in an attempt to warm your hands up for five minutes.

Your kids keep getting called off of school for a goddamn snow day.

Every other day it seems is a school “holiday” where they get a long weekend off of school. And as if that isn’t bad enough, now the snow showed up on the night before the hellish five days you’ve just spend cooped up inside and they’ve canceled school tomorrow.

Awesome. At least I won’t have to pay for summer daycare this year because my kids will be making up winter well into July at the rate we are going.

Something necessary to your continued EXISTENCE tends to break down at the WORST possible time, and that “time” is almost always winter.

Your kids *were* finally going back to school (hell YES!) BUT wait, no they aren’t. Because your car has been sitting in the frozen abyss that is your driveway for the last five days because you refused to leave in the blizzard and now your damn car is not cooperating.

You go back inside to find your house is especially chilly even with your two layers and 17 infinity scarves on and find your pipes burst because even though your kids are constantly running water somewhere in your house, apparently the weather is THAT cold that it can freeze even the hottest water moving through the pipes.

Your kids have a hard enough time finding socks, much less winter gear.

Try getting them to find two gloves, a hat, a coat, a scarf, and snow pants because now school won’t let them out for recess unless they are dressed like tiny snowmen. I don’t remember having the accessories my kids have now accompany me to school every day, but my kids need them, apparently. And also, not surprisingly, we can never find them when we need them. 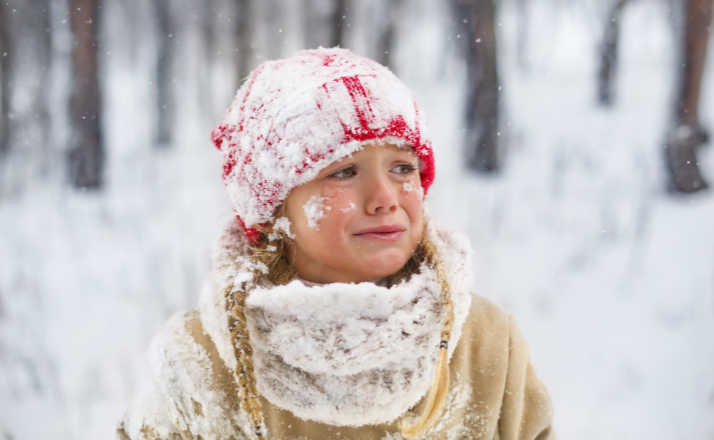 You will fall in the winter,

Some asshole (usually you) will forget to throw salt on the ice and you’ll run out the door in a hurry only to fall and bust your ass. But not only will you fall, but you’ll also do it in front of some hipster running a 5K down the block in the dead of winter, you know, someone “better than you” because… winter sucks.

Your dog won’t go out either.

So not only is your entire family caged in the house with the flu virus, but the stench of snot and pet urine fills the stale air. Can’t we just open a damn window? No. Because they are shrink-wrapped in an attempt to keep whatever heat you can as close to your body as possible.

As if they aren’t already acting like complete rabid dogs, winter exasperates the symptoms 10-fold. They are stifled, homebound, and antsy and they turn on each other (and you) at any chance they can get. It’s a toss-up as to who is going to make it out of this season alive. But my money says it won’t be me.

Winter fucking sucks the big icicle. The only benefit is that when I say I don’t want to go somewhere, I have a million degrees below zero excuses at my disposal to keep me in the house, out of the snow, and in my thickest, coziest loungewear.

Teacher Writes “WTF is this?&…