Filter Free Parents
Home Parents Check On Your Friends Who Got a Pandemic Puppy. We Are Not...

“What the hell did we just do?!” I muttered under my breath as I wiped up the 10th puddle of pee for the day.

The nearly instant regret of getting a puppy two months ago felt almost exactly like when I brought my baby home from the hospital for the first time.

It’s supposed to be a happy time, but as it turns out, it’s hell. Especially during a pandemic when I could be lying around lazily watching too much Netflix.

You get no sleep. Everyone is exhausted. There’s poop and pee everywhere and you’re doing more loads of laundry than you can count. The only things missing were the sore nipples and broken vagina.

Getting a puppy seemed like a great idea during quarantine.

We’d have plenty of time to potty train her without needing to go many places, we wouldn’t be traveling, and it would break up the monotony of being stuck at home.

But no one told me a puppy is like taking care of a newborn and a toddler on crack simultaneously.

I had flashbacks of the terror of the toddler phase as this dog climbed on every.single.surface–even our bar height counters–and was drawn like a magnet to hazardous spots like the fireplace.

Paw prints of ashes scattered throughout our living room and a cloud of ashy dust were evidence that this dog could not be contained.

She barreled right through any barricade we created leaving us mere seconds before she would destroy everything in her path or do something to hurt herself. 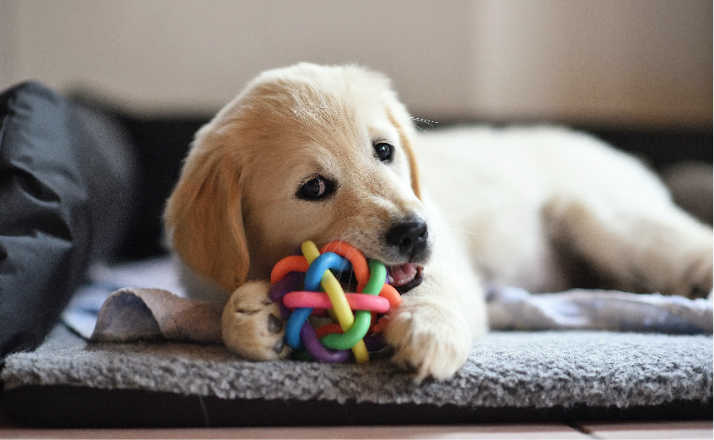 The more dangerous the better. Pencils, magnets, batteries, you name it. I naively thought we had everything put away, but we didn’t.

So inevitably you have to pry her mouth open twenty times a day to fish out whatever death-causing object she managed to grab this time.

Unless you missed it, and by some miracle she didn’t die, and you see it in her poop later. Or barf.

It’s really anyone’s guess which way the contraband will exit her body. Although I have to say, the bright blue of the Nerf gun bullets really stand out against a sea of brown mush.

And did I mention the exhaustion?

Because the energy of this puppy is unparalleled by even the most headstrong toddler that refuses to nap. And she is a hell of a lot faster than me already, and harder to trick than a child.

The minute I sit down, she immediately starts doing something stupid. And then I yell at my husband, “No! NO! Not my turn!!!! NOOOOOOOOO!”

Also, no one told me that puppies come with their own sex education lessons.

Our little bundle of fur loves to hump my four-year-old with the burning passion of a thousand suns.

It’s hard to know how to respond to, “Mommy! She’s MASSAGING me!” as the whole room erupts in laughter. And why the dog picked my four-year-old to make love to is beyond me.

I used to think it was ridiculous when people said they were a “dog mom” or that having a pet was like having another child, but I was wrong. This is legit. And it’s BANANAS.

So check on your friends with a new puppy. They are absolutely not ok.

Kroger Being Sued for Selling High …

It is so hard to be a functioning adult these days. Am I supposed to walk 10,000 steps, or can … Read More